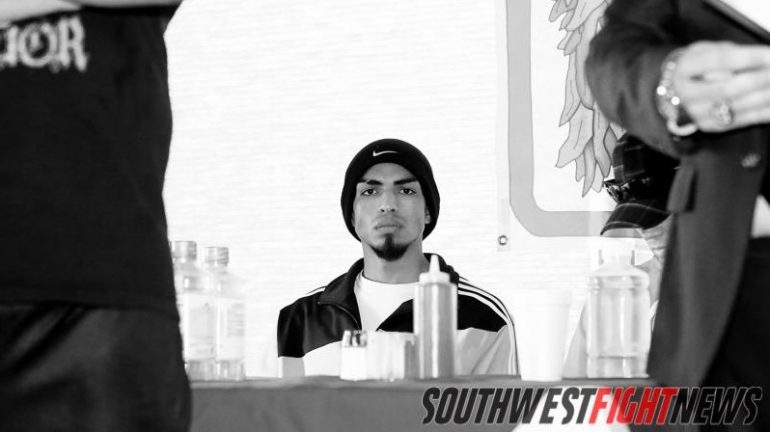 By the end of next month Albuquerque’s Cristian Cabral will have gone through the “Murderers’ Row” of New Mexico welterweights.

On Saturday night he will be taking on 23-fight veteran Shawn Gallegos (19-4, 5KOs), also of Albuquerque, at the Buffalo Thunder Resort and Casino in Santa Fe, New Mexico, in Cabral’s first bout since his lone professional loss in June 2013 to Aztec’s Joe Gomez (19-7. 9KOs).

A little more than a month after the Gallegos fight, Cabral will take on New Mexico’s top welterweight Josh Torres in a USNBC WBC title fight.

The closely scheduled fights against extremely tough local competition is a rare risk for fighters out of our region to take.

Cabral knows that most will not expect him to come out of the two-fight series unbeaten.

It is not the first time Albuquerque fight pundits have doubted Cabral.

“I’m ready to prove everybody wrong the way I did with Donald Sanchez,” says Cabral.

After starting off his career against a soft schedule of opponents, Cabral found himself with a five win and zero loss record when he was set to square off against Donald Sanchez, a hybrid fighter with a 2-0 boxing record and an established local mixed martial arts legend with over 40 fights.

Experience, most felt would help Sanchez outpoint the younger Cabral who in his sixth fight was finally taking on someone with a win on their résumé.

In a very good competitive fight Cabral would outpoint Sanchez on all three judges scorecards.

He would then take a giant leap against Gomez, a fighter nine years his elder whose previous competition had over 500 fights of experience.

Surprisingly, Cabral would outwork Gomez but would ultimately be stopped in the fifth of their six round fight.

Taking a leave from the sport, Cabral, took a job as a framer. The tough 10-hour workdays would exhaust him to the point where he could not even muster the energy to hit the gym.

Barring any injuries, the two quick checks are not the only positive that could come out of the upcoming Gallegos and Torres fights for Cabral. Consecutive victories will undoubtedly make him the number one ranked welterweight in the state of New Mexico and open more opportunities.

“We just got an offer to fight on Showtime,” says Cabral’s longtime trainer Ray Zamora. “They wanted him to fight this weekend but those quick [fights] are not set up for us. Those are set up for other people; the ‘house-fighter’. They give you a good payday but they expect you to lose.”

Zamora who also serves as Cabral’s manager says that their plan is to earn their way to where they are the ones calling the shots.

If the team were to pull off these two victories in less than two months, claiming the USNBC WBC title on the way, Cabral could gain the attention from promoters for national exposure.