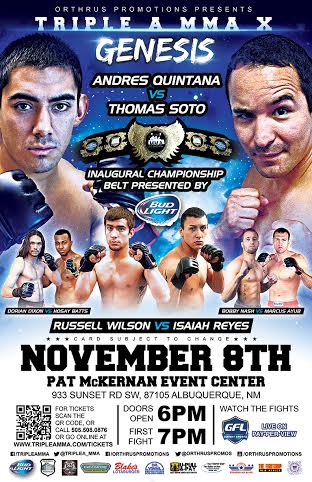 A solid main event with headline the card as Albuquerque trained and Roswell raised Andres Quintana (5-1) faces El Paso, Texa’s undefeated prospect Tom Soto (5-0). The inaugural Triple A MMA Championship Belt, Presented by Budweiser will be awarded to the victor.

Soto announced at Triple A MMA’s September event that he intends to finish the fight in the first round by breaking Andres and having him succumb to Tom’s game plan.

The co-main bout of the evening is also a solid fight as Albuquerque’s Bellator MMA veteran Russell Wilson (3-3), a winner of two straight, who takes on FIT NHB’s Isaiah Reyes (7-5) who will be back inside the cage for the first time since a controversial split-decision loss against Conrad Padilla in a featherweight bout at “Triple A MMA XIII: RIVALS”.  Wilson vs. Reyes will take place at bantamweight.

The night’s card will be streamed live at www.TripleAMMA.com/LIVE.