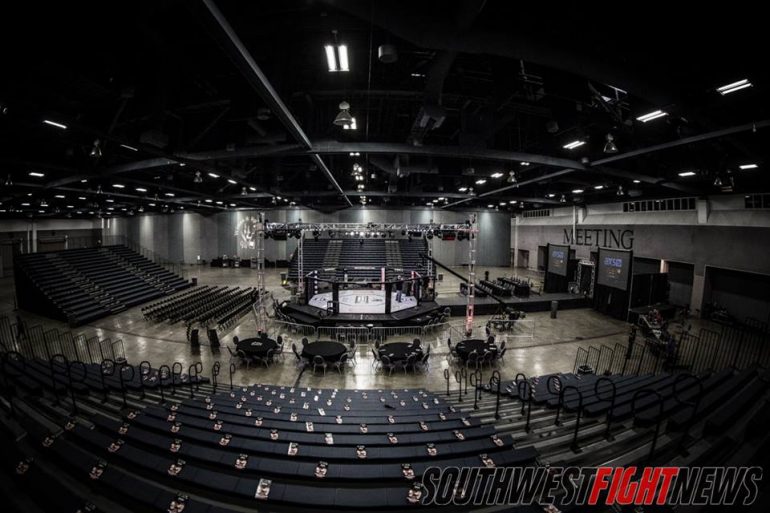 Promotions in New Mexico are struggling to sell out the seats in every venue in the State. Which fighter will standout from the rest to help become the new big draw in our storied MMA history?

Southwest Fight News is in the house for the first ever Resurrection Fight Alliance event in New Mexico. RFA 18 features several notable local fighters complimenting the RFA Flyweight Title fight featuring Champion Matt Manzanares and Alexandre Pantoja! Refresh the page throughout the evening to stay up to date with live results and play-by-play.

It is go time!

Round 1 – Velasquez starts with a double jab and Salvidrez counters with a takedown. He fights all the way to north-south position as Velasquez tries to buck out. Side control now and Salvidrez lands some power knees to the body. Velasquez worms his legs to half guard but Salvidrez looks heavy on top. Salvidrez reaches his arm over for a guillotine and jumps to mount. Velasquez patiently waits it out and escapes only for Salvidrez to get the back. Rear naked choke attempt now and Salvidrez is showing some dominant grappling. Velasquez is resilient. The round ends and it is a clear 10-9 round for Salvidrez.

Round 2 – Velasquez launches a kick that is caught by Salvidrez and Salvidrez follows with a takedown. Passes to side control and starts positioning for head control. Salvidrez commits to a choke and once again jumps to mount. The tap comes quick from Velasquez!

Round 1 – A match between two of the most talented and youngest grappling prospects in New Mexico and also two extremely gifted wrestler. If this hits the mats we might be in for a real treat. Martinez leads with a combo but works in on his patented wrestling  game where he quickly takes Mitchell down. They are back to the feet. Mitchell lets his hands go but Martinez changes level and gets inside with the clinch. Dirty boxing from Martinez and then a takedown. Mitchell is smothered here and Martinez is starting to work his offense. Mitchell is staying active and Martinez stands allowing Mitchell back up. Leg kick lands inside for Mitchell. They exchange and Mitchell gets his head popped back. Martinez swings and ducks under for a takedown. The round ends and Martinez takes that 10-9.

Round 2 – Superman punch misses but the following punch lands for Mitchell. Outside leg kick for Mitchell and Martinez launches a straight. A straight left hurts Mitchell and he covers up allowing Martinez to swarm him! Big flurry of punches and the ref stops it!

Round 1 – A lot of postering here until Montano throws double outside leg kicks. Price with a flurry of straight punches and Montano engages the clinch. Overhook for Montano and she launches knees down the middle. Price is looking to disengage but Montano is sticky with her clinch control. Montano lands some huge shots over the top and now she gets the takedown. She immediately jumps mount and starts pouring it on. The ref steps in as Price was taking a beating.

Round 1 – Long lands an outside leg kick. Both fighters hesitant to engage. Long shoots and gets the takedown stuffed. Betancourt throws a knee that narrowly misses. Head kick from Long. Betancourt catches a kick and flips Long to his back where he lands a hammerfist. Scramble ensues and Long gets on top. Side control from Long as he threatens a D’arce choke. Betancourt rolls out of danger but Long gets back to the three quarter stack position. Long puts him to sleep in the D’arce! He was out for several tense moments. Scary.

Round 1 – Riley lands a kick to the outside. Spinning wheel kick now as Riley comes out strong. Sosa clinches and gets the over/under but Riley reverses and gets the takedown. Half guard for Riley. Sosa shrimps but Riley is all over him. Sosa gets back to the full guard and starts hunting for a submission. Riley allows Sosa up and they go back to striking. Body kick from Riley and some inside punches drop Sosa. Sosa gets the takedown now. Butterfly guard from Riley. Rubber guard now from Riley and it stifles Sosa’s offense. Arm bar attempt from Riley! The arm is in deep but Riley isn’t extending the hips. The legs loosen from Riley and Sosa seems to have escaped danger. Sosa is out and landing punches. Round ends and it is a weird second half… close but I would call it a Riley 10-9 round but a Sosa round definitely could be argued. 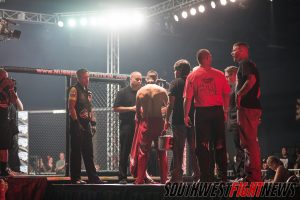 Round 2 – The round starts with a kick to the cup from Sosa and Riley takes his allotted time to recover. Body kick from Sosa and Sosa answers with a head kick that clips Riley. Riley immediately drops levels and gets the takedown and Sosa is once again fighting from his half guard. A “use the force” screams comes from the crowd as the action slows. Sosa gets his full guard and Riley bails. Flying knee from Sosa and Riley pins Sosa up to the cage with the clinch. Break from the ref. Two kicks miss for Riley and Sosa grabs the clinch and throws a knee down the pipe that is blocked. Inside elbow from Sosa as Riley looks to press Sosa in to the cage. Sosa landing more strikes defensively. Another inside elbow. And another. Sosa fights off multiple trip attempts. Round ends with another failed trip from Riley. Another close one but I would give this one to Sosa. 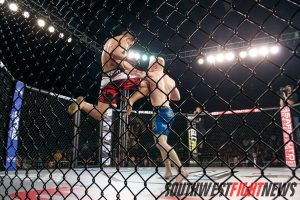 Round 3 – This fight could be anyone’s fight at this point. Sosa comes out more aggressive with a body kick but Riley chops Sosa down with a leg kick. The fighters exchange and they go back to the clinch where Riley controls the posture but Sosa lands the strikes. The fight may come down to how the referees score the clinching. Now Sosa reverses and lands a knee. Riley gets back position. Now Sosa. It is a full on clinch fight. Sosa gets low and picks Riley up over his shoulders and slams him down. Side control for Sosa. Riley attempts to wall walk but Sosa smartly follows him around. Riley appears to be slowing. As Sosa looks to get to mount Riley fights but gives it up. Riley gets back his half guard and now the full guard. It is a chess match as Sosa holds on to top control while Riley fights to create space. Elbows from Sosa. Rubber guard from Riley but Sosa slips out of it. Two solid punches land for Sosa. Round ends with Sosa raining down elbows! 10-9 Sosa and this will be an interesting judge’s decision.

Round 1 – “Killa” Cruz is one of the state’s most popular fighters and a win here will go a long ways to taking over Holly Holm’s spot as the fighter who can pack the house the best… and loudest. Cruz eats a low kick early. And another. The two fighters kick and land at the same time. Cruz is hurt! His leg is broken! He drops and the ref allows Linn to punch away. Awful to see that happen to any fighter especially one of our own locals.

Round 1 – DeLong starts with an outside leg kick. Inside now. Baghdad throws one of his own but slips and DeLong jumps on a guillotine but Baghdad sneaks out. There back up. Outside kick for DeLong. Another lands for DeLong. DeLong engages the clinch throws, some knees and they separate. Both fighters mixing it up but not landing. A left hook lands for Baghdad as I type that and DeLong covers up. Baghdad swarms him and drops him.. it is all over as one last left hook crushes DeLong as he retreats. 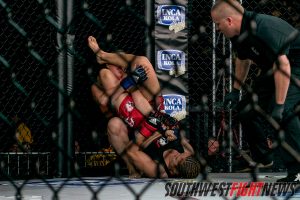 Round 1 – The fighters exchange kicks and Brenda hits the body with a gook. Bassett grabs the clinch and launches some knees. They separate. Head kick misses from Bassett. More kicks from the unorthodox Bassett. Gonzales starts pumping the jab. Bassett shoots deep and gets a takedown but Gonzales is right back up. But then back down! Bassett controls position but isn’t landing significant strikes. Gonzales shoots up the legs for a triangle and it is deep but she transitions into an armbar! Wow impressive grappling from the back!

Round 1 – Hanna misses on a takedown. Hard inside leg kick for Chidi lands. Hanna rushes in and Chidi lands a knee to the body in the clinch. Body lock from Hanna and Chidi looks to counter with the whizzer. Knees to the thigh from Hanna. Hanna works for the single leg but Chidi stays upright. Knee to Hanna for his troubles and they disengage. Leg kick from Chidi whips Hanna sideways. Jab from Chidi. Another leg kick. Hanna shoots and Chidi steps out and escapes. Another hard leg kick from Chidi and those have to be taking a toll. Another kick and these are getting brutal. Another and Hanna is desperate for the takedown. The kicks are thudding and echoing the arena. 10-9 for Chidi.

Round 2 – Chidi is dictating the pace of this fight with very crisp strikes. Leg kick whips Hanna around. Hanna steps in and grabs the body lock. Hanna gets the takedown but Chidi gets top position in the scramble. Hanna works off his back with elbows and a high guard. He rolls for an armbar but his leg slips down the back of Chidi. The two stalemate on the ground and they are stood up. Hanna grabs the body lock again which is stifling the high power offense of “Chidi Chidi Bang Bang”. Clean break from the ref and the fighters are back to striking. Chidi misses a headkick and Hanna ends round two a bloody mess. Round 2 goes to Chidi 10-9.

Round 3 – Jab starts the round for Chidi and Hanna rushes in but isn’t able to catch his target. Another jab and Hanna is clearly hurting. Hanna engages the clinch again but they stalemate again. Not much action here as Hanna works diligently to get the takedown. He finally gets it but Chidi reverses to get top position. Nice display of hip control from Chidi as he hits the mat. Full guard from Hanna. Armbar attempt but Chidi stands up. Step in toss from Chidi takes Hanna down and he stands over him. Right hand from Chidi lands on the chin and Hanna is one tough individual. Chidi gets Hanna down and lands a hard elbow. Chidi is beating Hanna up from top position and this should be a clean sweep for Chidi as Hanna ends the fight on pure toughness bleeding profusely. 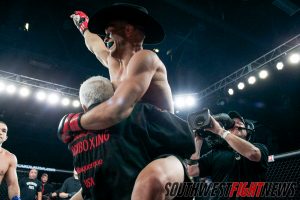 Round 1 – The return of “The Silent Assassin”! A welcome chant from the crowd acknowledges that the fight fans in New Mexico still very much remember Abel as one of our area’s very finest. Inside kick from Gomez checked by Cullum. Leg kick lands clean for Gomez. Cullum lands a flurry and looks for the takedown from the body lock. He gets it! Gomez reverses to top position and now Cullum works on a guillotine. And he rolls to mount with the choke! He gets it! “The Silent Assassin” is back! The crowd erupts into an “Abel” chant!

Round 2 – A flurry from both fighters leads to Manzanares being clipped and Pantoja momentarily hitting the mat. Now the fight hits the ground and Pantoja hits an armbar and Manzanares wiggles out and back to his feet. Good start to the round. Manzanares lands to the body and Pantoja uses the closing of distance to get the takedown. Pantoja goes to the back and starts threatening a rear naked choke. Pantoja puts him to sleep! Huge upset! RFA has a new RFA Champion!