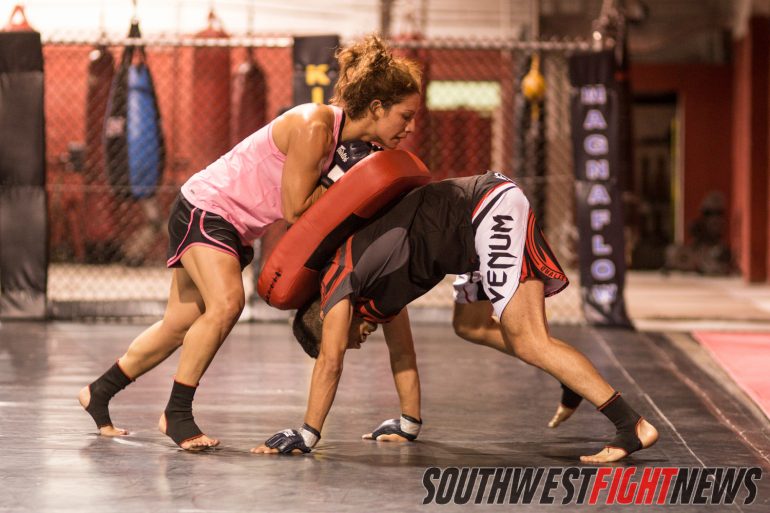 In a combat sport it is common to come across injuries of competitors that force some out of action and training. Punching can lead to broken hands, kicking to broken legs, feet, and toes. Concussions, knee injuries, and lacerations are all injuries that plague martial artists around the world.

Some injuries are more severe than others and the severity of FIT NHB’s Brenda Gonzales can be chalked up as more serious than your typical injury.

Back in May of 2013, “Boom Boom” traveled to Japan to take on Rin Nikai in the renowned Pancrase promotion. Gonzales was undefeated at 4-0 and was the King of the Cage Flyweight Champion, Nakai was very well-respected as Pancrase’s Champion and in fact, she would go on to be signed by the UFC where she is taking on Meisha Tate in two weeks time and at 16-0 is one of WMMA’s best fighters.

During the first round, Gonzales would suffer a very serious injury.

“Rin did a little hip toss and on my way down I stuck my hand out to break the fall. My arm then folded. I wasn’t sure if it was broken or what. She got me in a rear naked choke and I realized I couldn’t move my other arm. I remembered it just kind of dangled. The ref never snapped till after I tapped. I completely dislocated my elbow, completely tore my UCL (which is when they usually do the Tommy John Surgery), had a small bicep tear, and a few other partial tears and strains.” – Brenda Gonzales

For anyone who has ever suffered a dislocation, that injury alone is painful enough and adding the tear to the Ulnar Collateral Ligament made the incident very severe. The UCL tear will put most Major League Baseball players out for a year and often times ends their competitive careers. This was no different as the injury was so severe that Gonzales almost had to hang up the gloves.

“If I did the surgery (to repair the injury) they said I’d have to get screws and pins and that I wouldn’t be able to fight with them. My chiropractor Dr. Doggett knew I wouldn’t accept that news so he helped me out and showed me what I needed to do to strengthen it. I have rehabbed it and have strengthened it. I feel pretty good about it now.” – Brenda Gonzales

With the rehab process behind her, Gonzales has competed twice in the boxing ring since May earning victories in both outings. It is no secret that Gonzales favors the striking game as she trains under the tutelage of the renowned Thai boxing style of Coach Arlene Vaughn.

Gonzales pictured training with teammate and fellow RFA fighter Tim Sosa, shows off her kicking power in training. Gonzales will bring very efficient striking into the cage Friday night in her return to MMA action.

This Friday night, Gonzales (4-1) takes on Heather Bassett (2-1) of Fond Du Loc, Wisconsin who may be most notable for fighting infamous transgender fighter Fallon Fox. As an amateur Bassett was 3-2, and proved to be a tough out for every opponent she stepped into the cage with.

The bout with Bassett will be one of great importance to Gonzales as it will be his return to MMA action after suffering her first career setback.

“I’m super excited to get back in the cage!! It’s been a long year and a half since my last one, but I feel I’ve learned so much since then. I’m coming back mentally and physically stronger!” – Brenda Gonzales

The timing couldn’t be better for Gonzales as the popularity of WMMA couldn’t be higher and as the first season of The Ultimate Fighter featuring an all-woman cast is set to start in a matter of days, “Boom Boom” knows a win can begin her journey up the ranks to the big show.

Gonzales fights in the 135-pound weight class, the same that most of WMMA’s top stars compete in including Ronda Rousey, Meisha Tate, Albuquerque’s Holly Holm, and her last opponent Rin Nikai. A win under the RFA banner could propel Gonzales on the fast track to the sport’s highest level.

“It’s awesome to see all the talented women coming out of New Mexico. I feel if I go out and put on a good show that it’ll open some doors. RFA is a good UFC feeder.”- Brenda Gonzales

While some could argue that Gonzales has to shake off some ring rust on Friday night, her activity inside the boxing ring may prevent that obstacle from coming. Just a few short weeks ago, Gonzales competed in an all-woman boxing event in Canada and came away with a hard-fought judge’s decision against a very talented opponent.

“I feel boxing has helped me get back into the cage. I feel my hands have gotten a little sharper. The whole experience of being back in competition, traveling, cutting weight, and everything that comes along with it has all help prepare me.” – Brenda Gonzales

Fight fans can expect a motivated Brenda Gonzales on Friday night and while she hasn’t fought in New Mexico since 2011, expect a loud supporting crowd for the fighter from Moriarty. Always an exciting performer, Gonzales could give the fans in attendance a real treat inside the RFA cage.

Tickets for the event can be purchased from your favorite fighter listed on the fight card including “Boom Boom” herself, or visit the Hold My Ticket website (https://holdmyticket.com/checkout/event/180510). The event is set for this upcoming Friday, September 12th, inside the Albuquerque Convention Center.