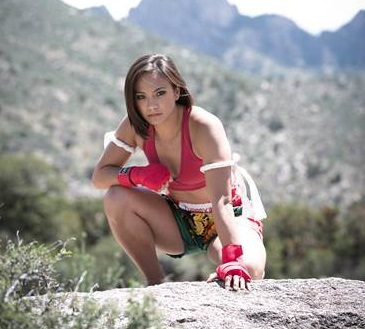 A true pioneer of WMMA, Michelle Waterson has served as a role model to athletes who also take on the mantle of mother and wife. Photo: Will Fox

It has been almost a year and a half since we saw Albuquerque, New Mexico’s Michelle Waterson claim the Invicta Fighting Championships Atomweight Title in April of 2013. Waterson went into the contest against the then top atomweight in the world Jessica Penne. The oddsmakers had Waterson a four to one underdog. “It was huge!,” recalls Waterson (11-3) on the odds. “To me, I guess I can take it to my advantage; if you’re going to under look me, go ahead, because you’re going to get beat.” Saturday’s Invicta FC 8 card will be the first Invicta FC card to be streamed UFCFightPass.com, the still in its infancy online subscription service for the Ultimate Fighting Championship. Waterson will be featured in the main event against the relatively unknown to American fans, Yasuko Tamada (15-8-3). “It’s exciting to know that I’ll be the one headlining it,” says Waterson of the first all-female the UFC has ever helped promote. Her opponent Tamada, is a veteran of Japan’s JEWELS Women’s Fighting Entertainment organization, one of the first promotions to showcase all women fighters on their cards. Waterson will look to become the first women to defend the atomweight title in a bout where she opened up as an overwhelming 11 to 1 favorite for the bout. Here is a recent interview with the “Karate Hottie”… http://www.youtube.com/watch?v=mxzOfHms74E