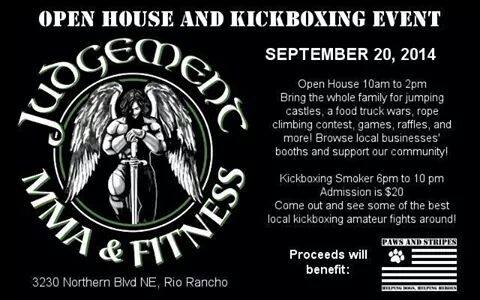 On September 20th, in less than two weeks, the Judgement MMA gym in Rio Rancho will host a benefit event inside their gym to fundraise for “Paws and Stripes”. The event will be an open house of the great facility the Judgement MMA team trains in as well as a kickboxing event featuring a full lineup of talented amateurs ready to put on a show for those in attendance.

“We are having an open house on September 20th from 10 am to 2 pm. Local businesses will have booths to meet the public and support the “Paws and Stripes” non-profit organization. All proceeds from the open house and the fights go to “Paws and Stripes”. They provide counseling and dogs for vets with PTSD and traumatic brain injuries. Home grown UFC Fighters Tim Means and Ray Borg will be here during the open house to take pictures and sign autographs. The National Guard will be setting up a rock wall to climb and an obstacle course. Fight start at 6 pm and will have fighters from local clubs and clubs from as far as Salt Lake City, Utah and Colorado.” – Scott Marlowe

The mission statement and information on the “Paws and Stripes” organization’s can be found on their website, it reads:

Nonprofit Paws and Stripes™ provides service dogs for wounded U.S. military veterans with post-traumatic stress disorder and traumatic brain injury. The dogs come only from shelters, and highly trained service dog trainers work with the veteran/dog teams. The dogs and the training are provided to the veteran free of charge.​

Any veteran from any war knows the suffering involved with post-traumatic stress disorder (PTSD). And now with so many men and women returning from the Middle East, the number of veterans in our country with PTSD is staggering. Add the frequent incidents with improvised explosive devices (IEDs), and you have a significant increase in traumatic brain injuries (TBI) as well. Insurance companies do not cover service dogs to assist veterans with symptoms of PTSD and TBI — which often come together. The usual costs of getting a service dog are great: from $10,000 to $30,000 and sometimes up to $60,000, and would often include countless months seeking grant money to fund the purchase. The cost to complete canine training for a Paws and Stripes™ veteran/dog team is funded by Paws and Stripes through donations. The veterans are never obligated to pay a penny for successfully completing the program.

Lindsey and Jim Stanek founded Paws and Stripes in 2010 because of Jim’s struggles with PTSD and TBI. Jim was sent home from his third tour in Iraq for injuries he received while deployed. After nine months in treatment at Brook Army Medical Center in San Antonio, TX, Jim discovered that the most comfort and relief he found was in the presence of therapy dogs. In May of 2010, Jim and his wife tried to obtain a trainer for their rescue dog, Sarge. They soon learned about the difficult and expensive process of getting a service dog. After being rejected or unable to pay for service dogs from multiple organizations, they decided to start their own organization for veterans. Paws and Stripes™ was born and was incorporated in June 2010. Since then, Jim has trained his own service dog, a process that he found rewarding, relaxing, and more effective than any medication or therapy session.  ​

Many service dog providers require people to accept service dogs that have already been bred and trained according to the provider’s principles. Veterans would have no say in which dog they are given. Paws and Stripes™ allows the veterans to choose their own dogs from a pre-screened group of shelter dogs, then trainers work with the veterans and the dogs.Paws and Stripes trainers promote positive dog training using positive reinforcement and motivation to obtain desired behavior. Positive training methods foster communication between the handler and dog, help build trust and teamwork, and provide a more relaxed atmosphere that can reduce stress and develop a strong Service Dog Team. The veterans are involved in every aspect of the program — facilitating healing, building self-confidence, increasing their bonds with the dogs, and developing the tools to maintain the dogs’ training long after graduation. ​

The Judgement MMA gym is home to coaches Marlowe, his wife Robin, and Jiu Jitsu wizard Rich Chavez. Amongst their notable fighters, Adrian Cruz, John Rozema, Brent James, and Carlo Rodriguez. The Rio Rancho hot spot for MMA has long been involved in their community and this event is a true testament to the character of all involved from within the gyms walls.

In addition to the fights and National Guard booth, the gym encourages the whole family to come out to the event. There will be jumping castles, food truck wars, a rope climbing contest, other games, raffles, and more. Admission to the event will be $20 and again all proceeds will go to the “Paws and Stripes” non-profit organization.

Judgement MMA is located at 3230 Northern Blvd NE in Rio Rancho. Hope to see everyone there!