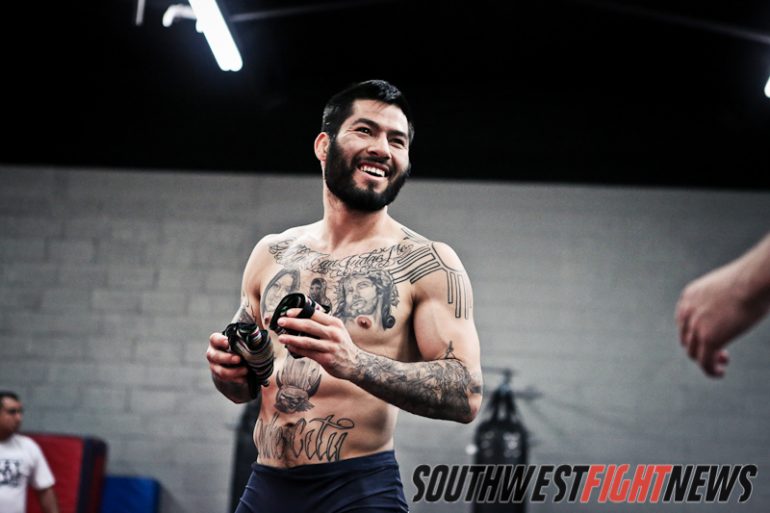 This afternoon, a press conference was held at the Tia Juanita restaurant to announce Legacy FC 36 to be held in Route 66 Casino in Albuquerque, New Mexico. The fight card was stacked full of local talent from New Mexico and Legacy FC in partnership with Fresquez Productions will start their run of events in the post-Holly Holm era in New Mexico. Holm headlined the last Legacy FC event in New Mexico and has been the main draw on every Fresquez Productions MMA event.

While several notable fighters were announced, the most popular name on the fight card is Damacio Page (18-9) who will take the co-main event slot against Alan “Puro Osso” Nascimento (13-2) of Brazil. Page is  on the comeback trail looking to break into the UFC’s Flyweight division.

The main event slot belongs to Cody “The Freight Train” East (8-1) who will headline his second major MMA event as he continues his run up the regional ranks of the Heavyweight division. His opponent will travel from Waco, Texas to take on the surging East, Vernon Lewis (4-2) will come to New Mexico and attempt to play spoiler against the hometown headliner.  The fight will have huge stakes

World Champion Jiu Jitsu Ace Rafael “Barata” de Freitas (6-0-1) takes on the talented Flyweight prospect Jordan Espinosa (5-3) in a highly anticipated bout featuring two locally trained athletes. A win for “Barata” puts the Brazilian fighter one step closer to the big show (Barata competed on a season of The Ultimate Fighter) and for Espinosa, the fight comes as the biggest opportunity of his young career.

Chavez Dojo’s Angelica Chavez (4-2) is expected to be featured on the fight card which will come with high excitement from the fight community as “South Valley’s Own” Chavez is a big-time draw in New Mexico. Her opponent is scheduled to be Natalie Roy (2-0) who must first win her fight in September against Nohime Dennisson.

‘Battle at Sunset’ Goes Down Saturday in the South Valley

Roy vs. Chavez & The WMMA Superfight That Almost Happened

[…] Legacy FC 36 was announced during a press conference this past August, the fight card was stacked from top to bottom featuring local fighters and local […]