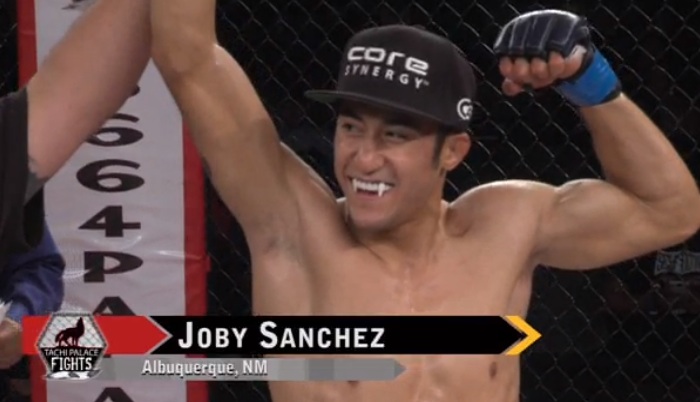 Early in the first round Sanchez’s lateral movement had Bañuelos tentative to throw. Sanchez was able to pick shots from the outside and was successful when he had the former UFC fighter backing up.

It was when Sanchez would stalk and stay busy with strikes that Bañuelos had time to set up his shots, stinging the Jackson’s-Winkeljohn’s MMA fighter twice including a high kick at the tail-end of the first round. The strike dazed Sanchez forcing him to retreat as the round came to an end.

The second was all Sanchez.

A combination would drop Bañuelos and force him to cover tightly while on his knees. Attempting to end the bout Sanchez would deliver four shots to the back of the head forcing the referee to halt the action while Bañuelos recovered from the illegal blows.

Now a 32-fight veteran, Bañuelos did a good job of selling his injury in an attempt to recover from the blows that led to him being on ground.

Once the fight resumed Sanchez would unleash another combination capitalized by a right knee that floored Bañuelos once again. This time the ground and pound that followed would force the referee to end the match for good, awarding a technical knockout victory to Sanchez at the 02:41 mark of the second round.

Note: The bout became the co-main event of the evening due to a main event fighter failing to make weight at Wednesday’s weigh-in.