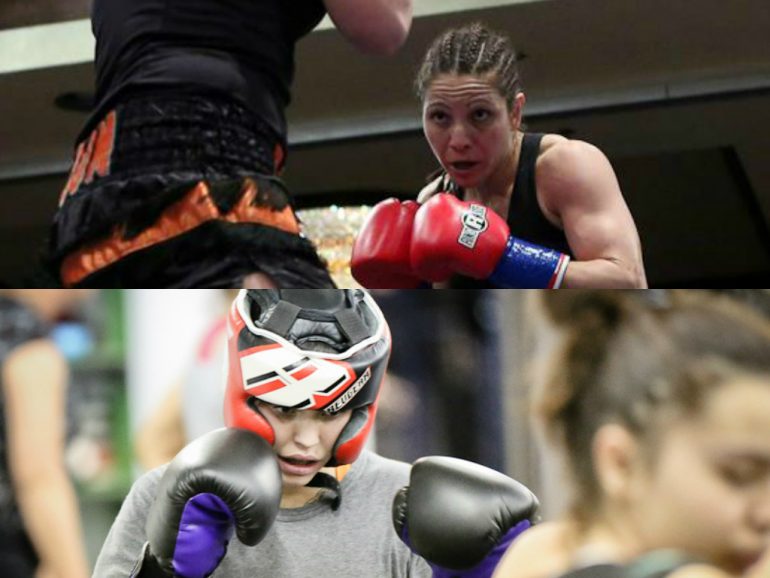 We have seen all-women mixed martial arts promotions be very successful recently. Nordic Coliseum Women Boxing hopes to do the same for the pugilistic sport when their inaugural event, aptly titled NCWB 1, hits the Crowne Plaza Hotel in Gatineau, Quebec, Canada this evening.

Two of New Mexico’s own hybrid fighters will be featured on the card as FIT NHB’s Brenda Gonzales makes her second straight appearance in the ring as teammate Amanda Lovato makes her professional boxing debut.

“I’ve seen one fight and for that matter it was just highlights,” says Gonzales. Despite not having fought in MMA for over a year due to time spent mending a broken arm suffered at the hands of now UFC fighter Rin Nakai, Gonzales still holds the King of the Cage Flyweight title.

Shortly before her injury, Gonzales questioned if she would ever box again after a controversial loss to Las Vegas, New Mexico’s Amanda Crespin. “Boxing is bullshit” a shocked Gonzales told us that evening of the judges scoring, but here she is back in the ring for the second time is less than three months.

She hopes to capitalize on a May unanimous decision victory in an uncharacteristic sub-par performance against journey-woman DJ Morrison. “I put a lot of pressure on myself; it was my first fight since my injury,” said Gonzales.

“Boxing, right now, is where the opportunities are at,” continues the 32-year-old. “It’s a good start coming back from my arm injury.”

Gonzales is also already scheduled for her next bout, an MMA fight on the RFA 19 card taking place in Albuquerque September 12th.

“I enjoy doing both; I’m really missing MMA but I’ve been loving boxing,” said Gonzales. “If I get a good contract in either sport and am allowed to do both, then I will.”

In January of this year Amanda Lovato made her professional debut as a mixed martial artist, today she will make her debut as a boxer taking on fellow debutante Ashley Nichols.

Nichols is disciplined in several arts and has performed at the amateur and professional level in
Muay Thai, Kickboxing, MMA and Brazilian Jiu-Jitsu.

“I just honestly like fighting,” Lovato, explains on why she took the fight. “I’ll do any type of fighting.”

A few weeks after a unanimous decision loss in her first bout as a professional mixed martial artist, Lovato decided to change gyms, finding a home at FIT NHB recently in April.

“I didn’t have a lot of females to train with at Judgement MMA,” says Lovato. “At FIT it’s a different type of training than just fighting with the boys.

Some of the females she refers to at FIT NHB are the world’s number four-ranked atomweight Amber Brown and of course Gonzales.

Nordic Coliseum Women Boxing 1 fights air live tonight on GoFightLive and can be purchase for $14.99.