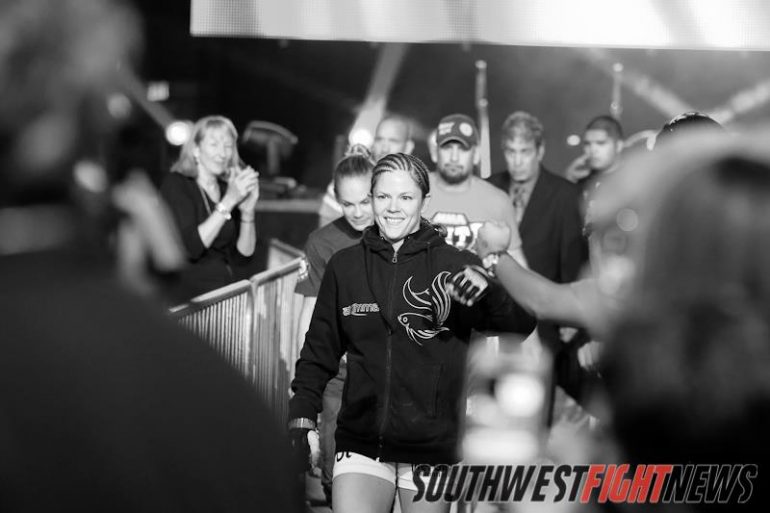 It isn’t a secret that New Mexico is and has been a hot spot of mixed martial arts for over a decade. It also isn’t a secret that New Mexico is home to some of the best MMA fighters in the entire world. While one of our state’s premier athletes is Holly Holm, New Mexico is rich in talent amidst the ranks of women mixed martial arts competitors. The first ever Woman World Champion calls New Mexico her home, Michelle Waterson the Invicta FC Atomweight Champion and the current King of the Cage Champion Brenda Gonzales also resides within the confines of the state lines. When the cast for “The Ultimate Fighter” Season 20 was released, it came without surprise that many New Mexico would be heavily influencing the all-woman season of the popular reality show.

When the UFC announced that it would be introducing a Women’s Strawweight division, several names were discussed from New Mexico as potential UFC fighters. Women making the cut from 125, packing the weight from 105 or natural 115-pounders alike, were abundant in this area. Even the most well-known Strawweight competitor set to participate on the show has ties to New Mexico. The season will be just like any other season that has preceded the 20th season, the main different, a major difference, is that the winner of the season will be crowned the UFC’s first Strawweight Champion. Needless to say, the stakes here are tremendous.

Most of these fighters were brought over from Invicta FC, the all-woman MMA promotion to develop the season and the weight class. The 20-women will have plenty of match-ups in and out of the “Ultimate Fighter” gym and should prove to be a new and exciting addition to the UFC roster.

The standout for the local New Mexicans on this list is Emily Kagan who trains out of the Jackson-Winkeljohn gym. Kagan (3-1), split her two Invicta bouts with a win and a loss. Kagan’s loss came to fellow cast member Rose Namajunas (girlfriend of Pat Barry) who is considered one of the early favorites to make it far in the tournament format as she is labeled by many as the top prospect in that weight class. Her lone loss came to arguably the top ranked women in the TUF season, Tecia Torres.

Tecia Torres (4-0) is arguably the top 115-pounders in the world and definitely in the TUF season as she owns wins over two women on the show and another who has been signed to the UFC roster. Torres infamously beat Felice Herrig (9-5), who most New Mexicans should be familiar with. Undeniably the women who embraces herself in a role of an “eye candy”, Herrig is the most risqué and flamboyant character in the WMMA ranks. Herrig’s beef and duel with rival Heather Jo Clark (6-4) may have been WMMA’s best feud outside of the UFC. Clark once trained at the Jackson-Winkeljohn and Lutrell’s MMA gym before taking her talents to Las Vegas, Nevada where she now trains at the vaunted Syndicate MMA gym.

Clark is one of the veterans on the show and has been fighting for a while longer than most of the women competing for the TUF 20 title shot. Another veteran of WMMA on the show who has New Mexico ties is Angela Magana who has recently moved her training to Thailand. Magana (11-6) trained out of Team Four Corners with Floyd Sword in Farmington. Magana is one of New Mexico’s hidden gems and in 17-career fights, Magana has fought a “who’s who” of WMMA. Amongst the notable names on her record: Stephanie Eggink, Jessica Eye, Jessica Aguilar (three times) and Jessica Penne.

Jessica Penne (11-2) undoubtedly has to be one of the dark horses to win the show as she is one of the most successfully fighters prepped for the show. While Penne has been fighting at 105-pounds, she was the Champion at that weight class until Albuquerque’s Michelle Waterson dethroned Penne and captured the title. Penne still has wins over Naho Sugiyama, Angela Magana and Nicdali Rivera-Calanoc.

Two women set to compete on TUF 20 have ties to New Mexico solely by the means of owning victories over two of our locals. Alex Chambers and Joanne Calderwood defeated Jodie Esquibel and Norma Rueda Center respectively in Invicta FC bouts. The last competitor of noting doesn’t have ties to New Mexico but may be the favorite to win the show alongside Tecia Torres, “Cookie Monster” Carla Esparza (9-2) is definitely one of the toughest competitors on the show and will be one of the women with a target looming atop their heads during the show.

This show is going to be groundbreaking for the WMMA landscape and will provide huge opportunities to 20 very talented women fighters. Two of our own, Emily Kagan and Angela Magana have an opportunity to become the first ever UFC Strawweight Champion. The show will be broadcast on network television on Fox Sports 1 and will be coached by the Lightweight Champion Anthony Pettis and the number one contender Gilbert Melendez. There is not yet an official date for the first show but filming is underway and SWFight will provide updates as to when the first show will be televised.