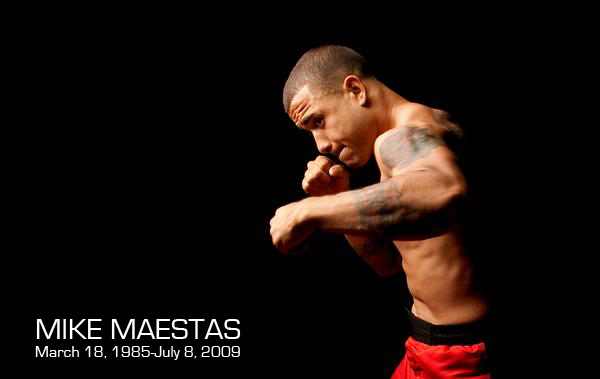 Five years ago, mixed martial arts lost an extremely talented young competitor and the world around him, friends, family, and supporters alike lost an exceptional human being. Michael Glenn Maestas, also known by his MMA nickname “Demolition Man” was 24-years old when he passed. Today, in honor of the talented young man, we revisit the legacy he leaves behind both inside and outside the cage.

Browsing through social media this past week, I came across a link posted by Gerald Lovato to a blog he authored. Lovato, as most fight fans will know is a veteran of MMA with over 25-fights to his name and part of Albuquerque’s FIT NHB fight team. Lovato’s blog post titled “Behind the Mask” immediately captured my intrigue; as a fight fan for over eight years, I have seen the MF Doom mask worn by several of the FIT NHB fighters heading to the cage and have seen the image on shirts, banners and posters.

Mike Maestas was a successful fighter, with a record of 9-2-1 at the age of 24-years old, he had already stepped into the cage with future UFC Lightweight Champion Benson Henderson. A veteran of the Fight World promotion, Maestas was well-rounded, finding victories in the form of knockouts, submissions and judge’s decisions.

In 2009, tragedy struck for the Maestas family and his many loved ones.

“In  July 2009, we were devastated by the untimely death of one of our
best friends Mike Maestas. Mikey had a unique connection to all of us.
He had something inside that none of us could get a handle on, but we
all wish we had . It is said that bright stars burn out  fast . Mike Maestas
was here and gone in a flash.” – Gerald Lovato

Maestas wore the MF Doom mask as he walked out to the cage/ring paying homage to his favorite hip hop artist, underground artist Daniel Dumile who is best known for his “super villain” stage persona and dawning the silver mask. The mask traces its origin to the Marvel Comic universe where Doctor Doom dawned the metallic mask. The meaning behind it today, portrayed by the shirts and memorabilia, and spread through the promotion of Lovato and others, is much different from that of its literal origins.

“Throughout the years people have asked me about the mask I used to wear, before my fights, when I would walk out. Here is what the mask means to me, the mask was a metaphor for change. It represented a character. The person inside we have to become before  we go to battle. A focused
entity of pure thought, soul, instinct, and our own destiny. In that moment, we are in the moment. Nothing else matters. We are  alone, but we are
free.

The HIP HOP SUN MASK represents truth, loyalty, integrity, strength,
and honor. Characteristics Mikey, and the rest of our group of friends
and  teammates believe in and stand for.” Gerald Lovato

With such deep substance, it is hardly a surprise that the image is seen so often amongst the group. From the t-shirts to the images online, the significance of the meaning promotes the intense promotion of it to anyone willing to give it a look. The memory of Maestas was captured in a single image and the bond that Maestas made with those close to him during his time training mixed martial arts will never go forgotten.

“We wanted to somehow keep his strong spirit close to  us. This is where the image of the “mask” was born.

We became a group of friends that pain, passion, loyalty, and hardships
of life  brought together through martial arts. There is a  bond that is
formed during training, shedding blood together and pushing each other
to our own personal limits. The dynamic team became brotherhood.
A  connection very few find in their lifetime.” – Gerald Lovato

While Maestas found immense success in competition, owning nine career professional victories, his legacy now eternal, was left out of the cage where his lasting memory has etched itself into the hearts and souls of so many. The beauty of the origin of the image was that it was hip hop based, but would turn into an emotion that gradually became the spirit of Maestas.

“All though not all of us listen to hip hop,  Mikey would randomly text us hip hop lyrics, or the words “HIP HOP SUN!”. With  those words and Mikey’s spirit,
a legend was created.”- Gerald Lovato

As we remember a tremendous athlete and from all accounts, an inspirational and exceptional young man, it comes with sincerity from the staff here at Southwest Fight News, that we send our best wishes to the loved ones of Mike Maestas and truly find it as an honor to remember his legacy.

“If you stand for what we stand for, then we stand together.