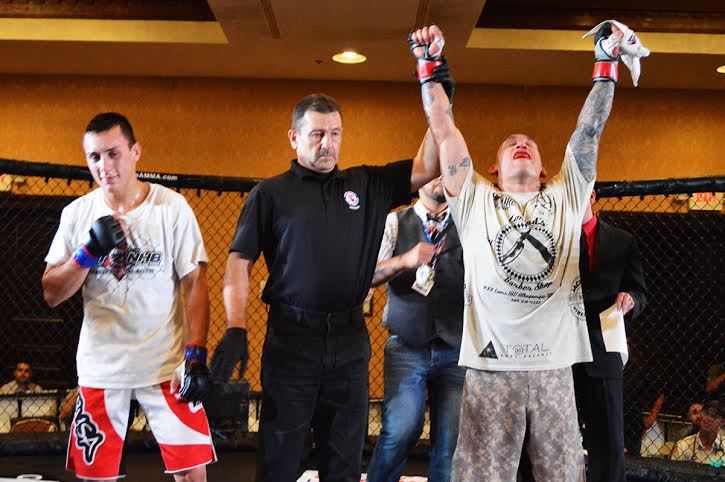 Media and Judges at Odds in Main Event Decision

The old saying goes “styles make fights”. That was definitely the case in the main event Saturday night at Triple A MMA VIII’s Rivals card inside the Crowne Plaza Hotel in Albuquerque, New Mexico.

The match-up pinned the two best MMA camps in New Mexico. This must be why Albuquerque fighters Conrad Padilla of Jackson’s MMA and Isaiah Reyes of FIT NHB came out extremely anxious for their bout.

The first clean connection would come from Reyes who would land a thudding left kick to Padilla’s stomach causing the sound to resonate around the ballroom (one of those kick would leave an imprint on the side of Padilla’s torso even after the fight).

Reyes would follow suit with a low kick that would help create some distance for the rest of the round.

Unable to pentetate Reyes’ defense of out-stretched arms and busy hands, Padilla would resort to periodic leg kicks none more impactful than a sweeping right kick that knocked Reyes off balance.

The second round showed some exchanges looking more like a mitt sessions as Reyes would block several of Padilla’s punches with the palm of his hand.

The Jackson’s MMA fighter would change his gameplan and target the body which would open up over the top hooks that would keep coming closer and closer to their target.

A solid right would finally land for Padilla which would later be followed up with a kick to the torso. The success in the round would continue as he would land a big left hook toward the back of Reyes’ head.

After a big Padilla miss, Reyes would momentarily take Padilla down. Blood could also be seen dripping from the left side of each man’s face.

A Reyes low blow would halt the action and finish out the round.

The third stanza would be ushered in with an eruption from the fans.

Even though he had the advantage circling around the cage picking shots Reyes chose to stay in the middle of it in this round. He would block consecutive hooks from Padilla and respond with a stinging jab.

Padilla would look to feint a punch low to set up another over the top hook but Reyes would refuse to bite.

Each fighter’s endurance looked amazing despite being drenched in sweat inside the small ballroom that at times felt like a sauna due to the enclosed setting and the brightness of the production lights.

Chants of “Reyes! Reyes!” filled the ballroom but it would be Padilla who responded to the yells after missing an uppercut would then work a shot to the body.

Reyes would begin changing levels with his punches but during the process would eat a strong right. He would then use his legs to move in and out of danger landing short shots but would get caught once he would position himself.

He would then revert back to his original approach and move on the outside and be very strategic and effective with shots from the exterior.

A huge over the top right hook for Padilla would force Reyes to change stances. Padilla would earn takedown off what appeared to be a Reyes slip.

The men would embrace as the bout came to an end.

There was no question that no matter whom the bout was awarded to, each corner would feel slighted by the decision as both put an extraordinary amount of work into the entertaining bout.

Despite not having landed powerful blows, most of the media cageside felt that it would be Reyes’ elusiveness and tactical striking that would earn him the decision. The judges however would give the nod to the pressure and power of Padilla.

“I felt that it should have gone my way but that’s what happens when you leave it to the hands of the judges,” said Reyes.

“He brought his A-game and I brought mine,” said Padilla. “That’s not our deal to score the fight; of course I thought that I won it.”

Due to a couple of fights falling out, Jose Cueto and Hunter tower found themselves as the co-main event of the evening… and sure fought like it.

In the performance of the night it took everything from Jose Cueto to come back from the storm Hunter Tower hailed on him early in their bout.

Demonstrating impressive athleticism, Tower was able to overwhelm Cueto with a great display of kickboxing, helping set up a takedown and more than one rear-naked choke attempt.

Unable to secure a finish, Tower would waste a large amount energy, allowing Cueto to take control of the fight with ground and pound and standing striking.

Cueto would sneak in a powerful spinning backfist after a failed checked kick by Tower. Cueto would take the fight to the ground up against the cage where he would deliver at least 20 strikes, mixing in right elbows and punches.

The referee, late with the stoppage, would call the contest at 01:30 of the second round.

Smith and Ring Steal the Show Early on

Halfway throught the card a pair of amateur fighters making their debuts put a performance worth note.

From the onset it appeared that Lovato MMA’s Marquis Smith’s boxing and hand speed would lead to an early victory over Luttrell MMA’s Slade Ring.

Smith was able to drop Ring twice in a round and no one thought Ring would be able to recover from the shots.

Feeling comfortable with the lead in the first round, Smith would become more relaxed in the second giving Ring the opportunity to gain his confidence by being able to implement significant kicks.

The round was made close because of Smith’s power punching.

A chessmatch made up the final round as Smith forced the action to turn back into a boxing match by keeping his distance and only engaging when he found it convenient.

Ring chasing Smith for much of the round made him the aggressor but was unable to have the success he had in the second.

The judges would render a unanimous decision victory for Smith.

“If he wants a rematch we can do it again because that was fun as hell,” said Smith post-fight.

Note: Requests were made of the ring announcer and multiple members of the commission to provide scores for the bout. Up until now we still do not know what was on the scorecard.