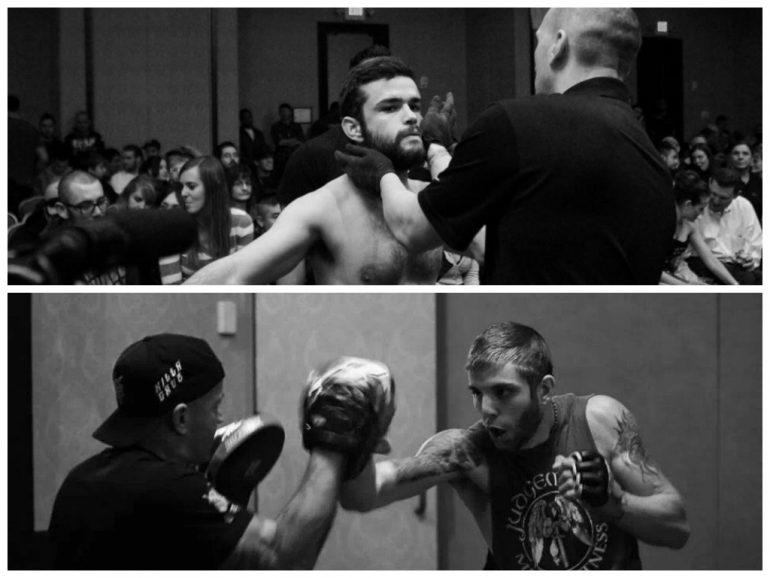 King of the Cage has always been a premier stomping ground for up-and-coming fighters and that has not changed this go-round for the “Rise” event to be held inside the Las Cruces Convention Center this Friday night, July 11th. The promotion is a popular platform for amateurs to get their feet in the cage so to speak and for professionals to begin carving out the beginning of their careers. With that in mind, this Friday night’s event has amateur and professional bouts scheduled for the fight card and will have several fighters and match-ups of note for the audience who will be in attendance.

Before the doors open at the Convention Center in Las Cruces, SWFight picked out five things to keep an eye out for during Friday night’s event. While the list could have stretched into the dozens, we selected what we believe are the marquee aspects of the fight card to prepare fight fans as they start filling the seats on Friday night.

At 0-1, Steven Ortega isn’t the flashiest of headliners but will have the duty of representing Las Cruces atop the fight card. His lone professional bout on record is a loss to the talented Javier Palacios in a fight that occurred in 2013.

Ortega trains out of Gracie Barra Las Cruces and will take on the very game Terrin Yazzie of Arizona. As the headlining act, Ortega shoulders the duty of ending the show for his hometown fight fans.

Expect to see the best Steven Ortega on Friday night.

4. Las Cruces/El Paso vs. the rest of the Region

Every fight scheduled for Friday night features a fighter from either Las Cruces or El Paso. Of the sixteen amateur and professional bouts, 10 feature Las Cruces/El Paso match-ups and that leaves 10 others that pit the hometown area against another city’s fighter.

With King of the Cage putting in the legwork to open up a marketable region, the area’s fighters in Las Cruces and El Paso have the ability to show their talents to fight fans and with victories over the out-of-towners, make a statement that the area is an area that can produce top-level talent.

The middleweight bout between Alexander Marshall (Las Cruces) and Anthony DeVargas (Grants) should be an entertaining bout being that DeVargas of J5’s MMA is a knockout machine and Marshall at 7-1 should be more than willing to bring the fireworks on Friday night.

“El Mosquito” is quite the amateur fighter and will be fighting just a short distance from his home base, the 10th Planet Jiu Jitsu El Paso gym. Chavez is 5-0 as an amateur and is definitely one of the area’s most successful and talented amateur fighters. In fact, he is unofficially the King of the Cage #1 contender at 135-pounds.

To add to the intrigue, the five wins of Chavez are all noteworthy. “Quito” own the lone victory over KOTC Champion Robert Herrera as well as victories over Judgement MMA’s Brent James, Perez Fighting System’s Thomas Mills and the successful Colorado fighter, Kevin Wirth.

Will a win over another tough opponent get him closer to a KOTC Amateur Title fight or will it be one step closer to a potential professional career? Either way the talents and technically efficient ground game is a must watch for fight fans on Friday night.

When Adam McGurk of El Paso steps into the cage on Friday night, he will be standing across one of the standout amateur fighters of 2013 as well as an undefeated professional who has earned a reputation of hitting people very hard. Judgement MMA’s John “Rock’em Sock’em” Rozema is a very powerful striker who is more than willing to fight in close range in order to find a home for he home run shot.

As his nickname indicates, Rozema can absorb some strikes while flinging his own leather, however, Rozema isn’t just your run of the mill brawler. The Rio Rancho based fighter is technical and fluid in his striking arsenal and has made the clinch a very dangerous place for opponents who get too close to Rozema. Every single victory, amateur and professional, has come via knockout or technical knockout via punches and Rozema has yet to see a third round.

Arguably one of New Mexico’s premier knockout artists currently on the regional circuit, Rozema will look to bring his firepower with him Friday night much to the benefit of fans in attendance hoping for a memorable moment on the “Rise” fight card.

Back on January 17th, a short seventh months ago, FIT NHB’s Tim Sosa would look to pick up his first professional victory after an outstanding amateur campaign. His opponent, Las Cruces’ Alan Lerma was similarly looking for his first win after two unsuccessful attempts. The pairing would be one of the most intriguing match-ups on the fight card and while the fight was exciting throughout, controversy bellowed throughout the fight and all the way to the judge’s decision.

An excerpt from our post-fight analysis of Rocktagon 30 held in El Paso:

The first two fights of the night had round clocks stating the rounds were five minutes long and each round came to an end at the 2:00 mark, which made each round three minutes long. According to a fighter competing tonight, the contracts were signed for five minute rounds.

The Lerma/Sosa fight was one of those fights and SWFight would learn post-fight that the contracts were signed for five minutes but the decision to have three-minute rounds came down from the Texas Athletic Commission citing inexperience of the fighters as the justification. The controversy of the decision can be found in the fact Sosa had over 10-amateur bouts to his name and had already fought one professional bout with five-minute rounds.

At the end of the three-three minute rounds, Lerma was announced the winner on the Judge’s Scorecards despite what this writer felt was a clear win for Sosa.

Here is some of our recap of the fight and result:

Tim Sosa was robbed in his fight with Alan Lerma. There is very little that anyone can say to sway my belief that Sosa undoubtedly won two of three rounds in their bout. Sosa landed a healthy dosage of kicks in the first round and did significant damage with strikes off of his back while hunting submissions all round long in the second. He attacked with arm bars and triangles, as well as an ankle lock that really cemented the fact that Sosa was more offensive and dictated the pace of the round.

This is where the three minute/five minute discrepancy in rounds really gets me heated. Sosa with five minutes very well could have opened up in the first round while he had his striking rhythm going and in the second round he would have had plenty of time to continue to hunt for submissions from bottom position.

Despite the opinion, Lerma emerged the winner and neither fighter has fought since this outing. Friday night should provide some validation to the winner and could very well start an interesting rivalry that may lead to a trilogy fight. Sosa will have to win to make that happen and being that Las Cruces and El Paso is the home area of Lerma, it will be easier stated than done. The improvement of each fighter will be on display and the fighter who comes in the most adjusted for the other will emerge victorious.

This fight is the potential “Fight of the Night” in my opinion.

These are just five of so many exciting aspects of this Friday’s fight card and we encourage fight fans to make their way out to the show to offer their support to these hard-working athletes. The doors of the Las Cruces Convention Center open at 6 PM. Stay tuned to SWFight for more event analysis and visit the site on Saturday for our post-fight analysis.

Holly Holm Signs With The UFC