Conrad Padilla Wants at Least 10 Fights Before he Retires

Having a fight still scheduled a week before it takes place is a feeling Conrad Padilla is not accustomed to. The four-year professional,  Jackson’s MMA fighter has had about half a dozen fights 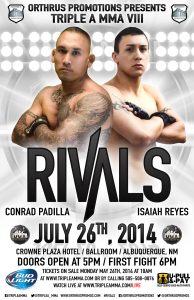 fall through in the past year alone.

The lack of action has the Albuquerquean questioning if he should even continue fighting.

“I get such long layoffs it starts to mess with my head,” says Padilla. “I’d like to get ten fights before I hang it up.”

Padilla will be partaking in his first action since his first and only career loss 11 months ago, a unanimous decision to Nick Rhoads.

“Being an undefeated fighter, that was a lot of pressure. I was trying to protect that goose egg as long as possible,” says Padilla. “The bright side is that I didn’t get submitted or knocked-out.”

“I always wanted to fight freely and have a good time but fighting at home there’s always a lot of pressure whether I’m undefeated or not,” he continues.

On July 26th, he will be taking on FIT NHB’s Isaiah Reyes on Triple A MMA’s “Rivals” card at the Crowne Plaza Hotel in Albuquerque, New Mexico. The bout will pit fighters from two best gyms in the state, a match-up that is rarely seen.

Despite the animosity that sometimes exists in crosstown rival bouts this one is anything but that. Both men have expressed a great deal of respect for one another and even more gratitude for being in the main event.

“He’s an exciting fighter I’m sure; 7 and 3.” says Padilla, referring to Reyes’ record. “He’s not punk for sure. He’s coming out of FIT so he’s tough.”

Check out our recent interview with Padilla:

Mikey Lovato Retires After TKO Loss To Gene Perez, Combat Xtreme In Belen Features Only Three Fights Amidst A Weekend Of Oddities