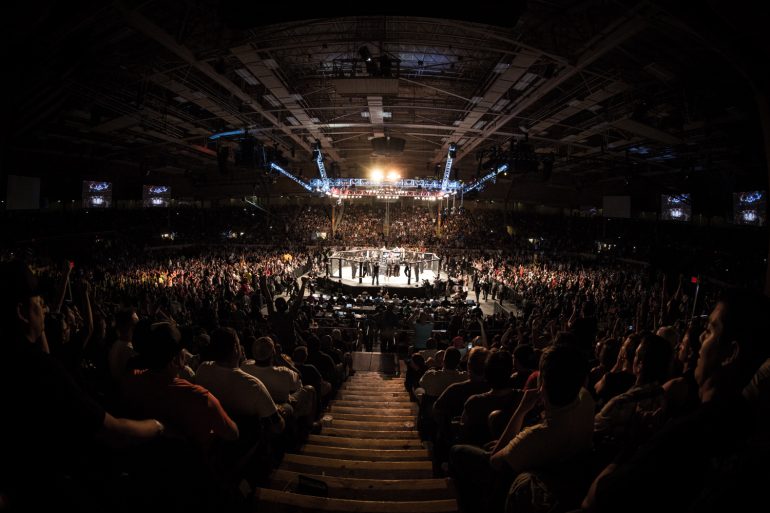 UFC Fight Night 42: Albuquerque at the Tingley Coliseum had good fights and its share of controversy. Photo: Will Fox

An eventful evening for several reasons took place at the first ever UFC event in the state of New Mexico, Saturday night in Albuquerque.  UFC Fight Night 42 marked the largest combat sports event to take place in the state, thus making it the most high-profiled Mixed Martial Arts event the New Mexico Athletic Commission has overseen.

The aftermath will test the New Mexico Athletic Commission statutes.

On Monday afternoon, SWFight.com had the opportunity to catch up with NMAC Chairman Tom King, to discuss the four main issues that arose on and after Saturday night.

The most publicized matter was of course the scores in the Diego Sanchez vs. Ross Pearson contest which ruled Sanchez the split-decision winner in a fight most felt he lost.

After the fight, Pearson and his camp would issue a formal appeal to the NMAC requesting that they review the official decision.

“Ross was very professional about the way he presented the appeal to us,” said King, who also understood why the decision could draw so much public interest. “[The decision] was controversial. A hometown fighter won a split-decision.”

For a review to take place, the complaint must be reviewed at an official NMAC meeting. The commission is then to give the public at least three days notice before a special meeting is set to review the matter in detail and present a decision over it.

The next NMAC meeting is scheduled to take place at 4pm Tuesday afternoon which means the earliest a ruling can be handed down is this Friday.

“I’m not sure it’ll be wise to do it all that fast,” said King, of a final decision being presented on the scorecard controversy this week. ‘We will do our due diligence to review the matter and go from there. We will take our time investigating this.”

Before Saturday’s fight card an agenda was already in place for Tuesday’s meeting, King mentioned. It is rare that new issues this close to a meeting are presented; only extreme circumstances; situations needing an immediate response i.e. suspensions (see Jason High incident below), would be brought to the forefront this quickly.

It is possible that Pearson’s appeal will not be on the agenda until next week’s meeting.

The last major overturn of a decision by the NMAC took place three years ago at Shark Fights 15 when Albuquerque’s Joey Villaseñor and Chris Camozzi’s main event bout at the Santa Ana Star Center in Rio Rancho was originally declared a split-draw.

(On Sunday we broke down the NMAC’s grounds for overturning a decision.)

A scoring error on one of the judge’s scorecards should have awarded the bout to Camozzi. The judge’s card was incorrectly read and documented as 29-29 when he had in fact scored the fight 29-28 for Camozzi. It would take the commission nearly a month and a half to overturn the decision and rightfully award Camozzi his win.

That entire review process took place a few months before King took over as the NMAC Chairman.

“Rest assured that it will not take us six weeks to come to a decision on the Sanchez-Pearson matter,” said a confident, King.

A member of the commission has also confirmed a scorecard tabulation error did not take place in Sanchez vs. Pearson. This leaves just collusion, and/or violation of the rules and regulations, as two of the three remaining statutes to possibly overturn the decision. These of course cannot be ruled as causes until a full investigation is conducted.

If wrongdoing by any of the judges cannot be proven then an overturn is not possible.

“[The investigation] may very well last until next month,” said King. “There are a lot of hurdles. We’re probably going to look into getting a legal opinion.”

Feeling that his match against Rafael Dos Anjos was prematurely stopped in the second round, lightweight Jason High would immediately stand up and shove 10-year veteran referee Kevin Mulhall to express his anger with the stoppage.

Unlike the more delicate approach the commission will take on the Sanchez-Pearson matter, the NMAC hopes in taking a much more swift approach in announcing their reprimand of High. There is a small chance that this matter will be brought to the attention of the commissioners at Tuesday afternoon’s meeting.

An announcement of suspension time and possible fines against High could instead be announced at next week’s meeting.

Since the incident is a first in New Mexico, it is likely that High could face as little as a six-month to a year ban from the sport.

An almost 11-month layoff is the longest High has gone inactive in career. High did apologize about his actions after his fight on Twitter.

Early Tuesday, a report on MMAJunkie.com expressed Ross Pearson-teammate, Dean Amasinger’s concerns of not seeing any of the four UFC Fight Night participants of Albuquerque-based Jackson’s-Winkeljohn’s MMA camp on a list of fighters he claimed to be randomly drug tested.

When we brought this to the attention of Chairman King it was the first time heard  the claim and immediately refuted it.

“We always, always test the two fighters involved in a main event,” he emphatically stated. “That includes the fighter from Jackson’s [Rustam Khabilov] on Saturday. For someone to say that a fighter from that camp was not tested, is factually incorrect.”

The NMAC chairman confirmed with SWFight.com that eight of the 22 fighters on the card were randomly tested. Every single one of the fighters passed their tests according to King.

At the time of our interview King was only able to confirm Khabilov and Benson Henderson as being among those fighters tested.

“That type of information will eventually be available to the public. The names will come out in a few days and everyone will see who was tested,” he stated.

Before finishing Jackson’s-Winkeljohn’s fighter Erik Perez in the seconds round, replays and video on social media would show bantamweight Bryan Caraway earlier in the fight using a what could have been ruled illegal fish hook.

In the post fight press conference, Caraway would state that the move was unintentional and that he had apologized to Perez after seeing several people call him out on Twitter for the illegal technique.

Perez‘ coach, Greg Jackson, would also dismiss the foul, calling it an accident. Chairman King, confirmed to us that Team Jackson’s-Winkeljohn’s nor Perez himself have issued a complaint.

UFC Fight Night 42 put the city of Albuquerque at the highest level of MMA on primetime television, for the first time in history. The decisions and actions that took place involving judges and fighters will now put the New Mexico Athletic Commission under a microscope of a great deal of scrutiny. It appears that Mr. King and his staff are up for the challenge.

“We learned a lot from this show,” he said. “We have rules and procedures in place and we’re going to apply them to assist us in addressing the issues that have presented themselves.”

Stay tuned to SWFight.com as more details over UFC Fight Night 42 and the NMAC’s decision’s continue to emerge.

[…] but wait there’s more. The New Mexico Athletic Commission’s Tom King spoke with SWFights.com about several of the issues that took place on Saturday […]

Carlos Condit not impressed with New Mexico Athletic Commission, says it is ‘amateur hour over there’ | Fight Pins | MMA Pins

[…] was also later accused of not testing Jackson’s MMA fighters on the card, which was adamantly denied by the executive […]

MMA and UFC live news | Carlos Condit not impressed with New Mexico Athletic Commission, says it is ‘amateur hour over there’ -

[…] was also later accused of not testing Jackson’s MMA fighters on the card, which was adamantly denied by the executive […]