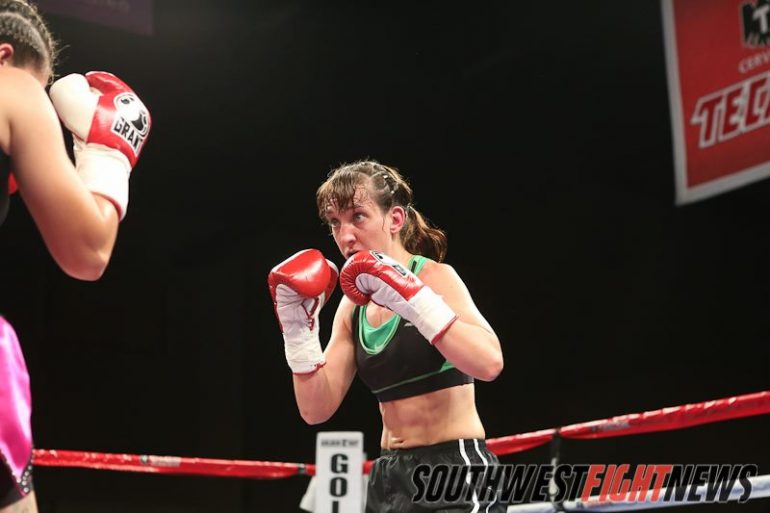 The first post-UFC event in New Mexico went down this past Saturday night as Orthrus Promotions returned to Camel Rock Casino to host the seventh Triple-A-MMA event. While the event titled “Rock Stars” failed to sellout the Camel Rock Casino Ballroom, the show was plagued by several scenarios that definitely impacted ticket sales. From injuries to no-shows, the highly anticipated fight card took some hits late in the week that should come as no fault to the promotion. Either way, the show went on and for the fans who made it out to show 10-minutes out of Santa Fe were treated to back-and-forth fights, knockouts, and submissions.

Possibly the biggest storyline stemming from “Rock Stars” was the absence of professional boxer Nohime Dennison who was billed to be the main event fighter outside of Santa Fe’s Natalie Roy. Up until June 12th, Dennison was still promoting the fight via social media and her right with Roy was definitely one of intrigue within the WMMA ranks as both women are professional boxers and incredibly gifted strikers. The fight would not happen and several fans were shocked when they saw Dennison in the crowd in street clothes instead of in the back preparing for the fight.

Dennison competed in a boxing bout in New York on May 21st where should would suffer a technical knockout loss in the sixth round. The New York Athletic Commission issued a mandatory 30-day suspension on the medical basis that she was knocked out. The June 14th date would of course fall within those 30-days and the medical suspension of any Athletic Commission is expected to be honored by all other Commissions. The boxing bout fell between the cracks it seems as very few people knew that it occurred. I wouldn’t have known personally if not for social media and the Pueblo Of Pojoaque Athletic Commission did a great job by not allowing the fight to happen.

Brain damage and head trauma is definitely the number one concern in combat sports. With studies flooding in through the ranks of National Football League (NFL) that show how dangerous it is to receive further damage to a concussed athletes, combat sports has to hold itself to a higher standard being that MMA is already under harsh scrutiny from groups of people who consider MMA to be barbaric and “human cock-fighting”.

While many, myself included wanted to see how the Dennison/Roy fight played out, I am glad that nobody’s long-term health was unnecessarily put into jeopardy at that expense.

With that being said, the show delivered several other memorable points.

(Lujan did not show up to weigh-ins)