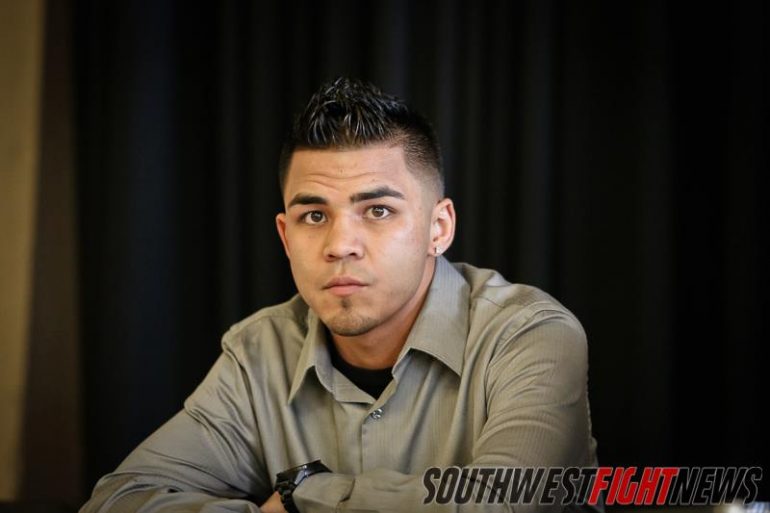 Matthew Baca will fight outside of New Mexico for the first time as a professional in July. Photo: Will Fox

On Wednesday, Albuquerque boxer Matthew Baca announced that he has signed a contract to fight Ryan Martin in the opening fight on a nationally televised ESPN Friday Night Fights card July 2nd. The four-round bout will take place at Foxwoods Resort in Mashantucket, Connecticut and will air live on ESPN2.

Originally from Tennessee but now fighting out of Cleveland, Ohio, the professionally untested, Martin (6-0, 3KOs) is a member of rapper 50 Cent’s SMS Promotions’ stable. Martin who had a stellar amateur career that involved over 200 fights, signed with multi-platinum selling rapper last September, two weeks before making his professional debut.

Martin is reported as having won 12 national amateur championships from different organizations. His professional opponents have a combined record of 8-19-3. He’ll face his toughest challenge to date when he takes on Baca (4-1-1).

Up until early last week, Baca had been in training for Carlos Villa (5-1-1, 3KOs), thinking they would be part of an El Paso co-main event Friday night. That event was postponed until late this summer. In shape, Baca hopped on the opportunity of being in the first televised bout of his career.

The main event July 2nd will feature former WBA World Super Featherweight title challenger Michael Farena (38-4-4, 30KOs) of the Philippines against another one of 50 Cent’s fighters, undefeated Mark Davis (18-0, 5KOs). That is not it for 50 Cent, he also has former IBF Featherweight titlist Billy Dib (36-3, 21KOs) set up for what appears to be a bounce back figth against Alberto Garza (26-7, 21KOs) in the co-main event.