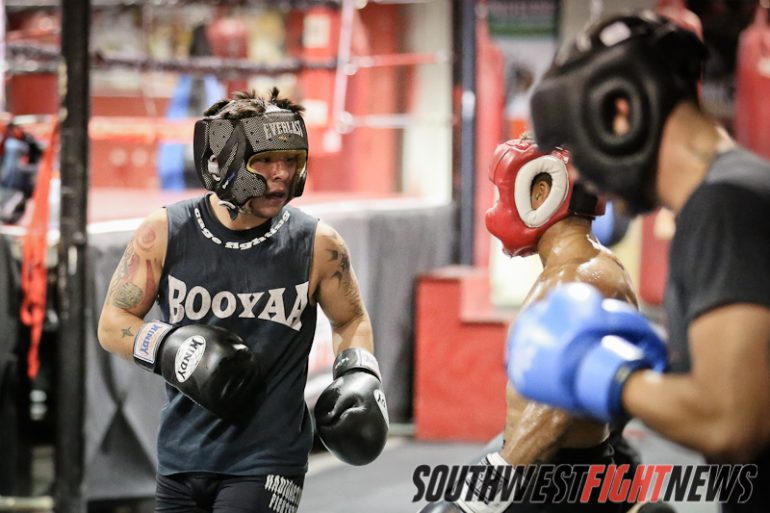 It will be a very quick turnaround for New Mexico’s hottest prospect as Ray “The Taz-Mexican Devil” Borg (6-1) had to wait a short two weeks before he was given his next task by the Ultimate Fighting Championship (UFC). This time, Borg will fight closer to home, in the neighboring state of Texas for a “Fight Night” show inside San Antonio’s AT&T Center. While the bout order is not official, Borg’s bout may be the opening act for UFC Fight Night 44.

FIT NHB’s Ray Borg put on a grappling clinic in his UFC debut. Not only did he earn five takedowns, he dominated on the mat by seizing back control over #13 Dustin Ortiz several times. Despite the fact many scoring the bout favored Borg, the Judge’s cage side gave Ortiz the Split Decision victory.
Photo Credit: David Manning / USA TODAY Sports / via MMA Junkie

SWFight and the surrounding fight community has always been supportive of the trail-blazing Borg, the fight scene in New Mexico has had the opportunity to watch Borg “grow-up” so-to-speak as he fought in the Santa Fe and Albuquerque area for several amateur and professional bouts. This past April, Borg captured a monumental victory of Jackson-Winkeljohn top prospect Nick Urso and was on the phone with the sport’s premier promotion, the UFC just 30-minutes later. Just two-short weeks later, Borg would be battling a top-15 Flyweight in Dustin Ortiz and while Borg came up short on two of three judge’s scorecards, many believed that Borg won the fight.

Despite suffering his first career loss, Borg gained immense amounts of notoriety from within the national media and UFC fans across the world as his performance was renowned by experts and fans alike. Showcasing his sharp grappling, technical wrestling and exciting stand up, Borg became one of the hottest commodities in the UFC’s Flyweight division. Now two short weeks after his UFC debut, MMA Junkie is reporting that Borg will take on Texas trained Ryan Benoit (7-3) in what will be both fighter’s sophomore UFC outings.

Ryan Benoit comes from the Janjira Muay Thai style of fighting and was one a Legacy FC mainstay for much of his career. “Babyface” dropped his UFC debut to Josh Sampo back in November and will now battle with Borg to try and earn his first career UFC victory. Borg and Benoit should enter the fight hungry to avoid an 0-2 UFC start and their styles of fighting can pencil them in to be the event’s early pick for “Fight of the Night”.

Fighting in Benoit’s hometown, Borg will enter the bout with a speed and grappling advantage while Benoit may be the most dangerous fighter Borg has faced in terms of fight stopping ability. Benoit has finished each of his seven victorious bouts, six of which have come via TKO. Stay tuned to SWFight for more detailed analysis and breakdowns.

UFC Fight Night 44 features Albuquerque trained and Jackson-Winkeljohn representative Cub Swanson taking on Jeremy Stephens. Amongst the rest of the card, a contender fight in the Featherweight division, an Ultimate Fighter winner, and the undefeated Myles Jury who just defeated Diego Sanchez.