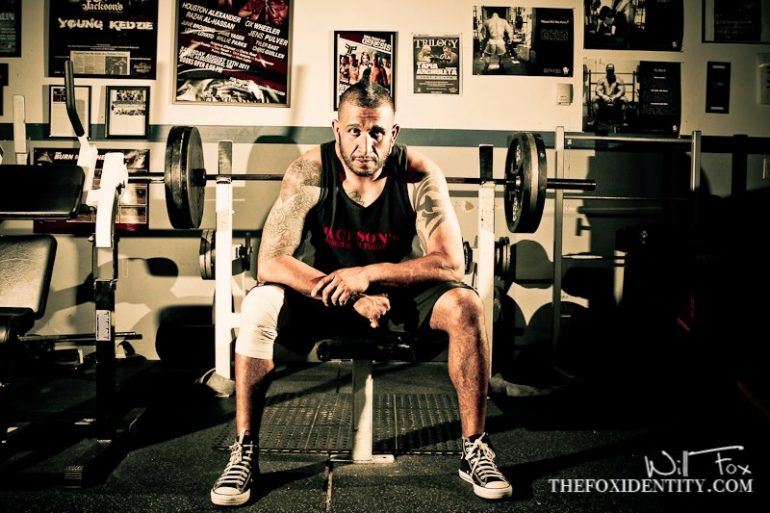 His professional MMA career started back in early 2008 and with some detours in the boxing scene, Rocky “The Angry Aztec” Ramirez is 10-fights and over six years invested into the MMA game. Currently heading his own gym, Ramirez still has deep ties to the Jackson-Winkeljohn gym where has trained with world-class fighters and coaches and in doing so becoming one of New Mexico’s most recognizable and influential figures in the combat scene.

Head Coach at the Westside Power Gym, Ramirez has a lot of power lifting happening between his gym’s walls but he also doubles as an MMA coach to several very successful MMA fighters. Amateurs Carlos Casados and Lindsay Jones train under the direction of Ramirez and with that he adds successful coach to his resume of professional boxer and mixed martial artist.

Ramirez has fought in New Mexico for most of his career but has traveled from Colorado to California for competition and as far away as Honolulu, Hawaii to step into the cage. He has fought for eight different promotions including Bellator MMA and the MMA Fight Pit which was held in “The Pit”, the University of New Mexico’s famed basketball arena.

Just as we did in the first installment of this series, we caught up with Ramirez to travel down “Memory Lane” and look back at the career and memorable moments of “The Angry Aztec’s” career. The mini-series pays homage to Ring Magazine’s “Best I’ve Faced” and Cage Potato’s “unforgettable” set of articles that take a look back at iconic boxing and MMA figures. SWFight’s version of this idea focuses on the iconic figures from our state’s fight scene.

“The Angry Aztec” has fought for several promotions over his lengthy career and has piled up experience to become one of the more well-known local fighters.

Biggest Rivalry:  I’d have to say Antonio Zamora. He had a huge fan following. I mean coming out to the cage all I could see was red and yellow. A lot of boos and anger from the crowd for me! *laughs* Not alot was mentioned of me coming into the fight but there was a lot of hype for him; that he was a knockout artist, this and that. Part of me felt they were using me as an easy fight for him but of course I proved them wrong. After I won I thought “Doubt me? Mr promoter, and fans? Thought your boy was going to KO me? Nope.” and I just smiled!

Hardest Single Strike Ever Felt: Hardest strike That I felt and said damnnnn??? To be honest, I’ve never been hit and said whoa in a fight. But my last fight against Eddie Larrea, he caught me with an uppercut that dropped me and I didn’t remember the rest of the fight from when he hit me so obviously that would have to be it. I can take shots but that one caught me. But the only time I ever got hit and said damn would be in practice against every animal at Jackson’s. *Laughs* The hardest though would be Tim Kennedy, that dude can hit.

Hardest Strike Ever Landed: Anthony Durazo. I broke his orbital socket in our fight, I knew exactly when I did it because I could feel it and I heard it somehow, hard to explain. It was ground and pound, I dropped the right hand down hard! In comparison to a regular punch, it was like punching a brick wall to punching a dry wall.

The Craziest “WOW” Moment: There are 2 actually. Once I was power bombed. *Laughs* and the second was that last fight with Larrea in that I don’t remember anything till I was in the E.R. As for the powerbomb, I was wrestling Justin Guthrie. I shot for a double and he stuffed it and somehow managed to lift me up and powerbomb me. That was the fight in Alamosa where weigh-ins were cancelled then done the day of the fight. No one knows this but when I was in the military I went to a wresting school (like WWE wrestling)in Salt Lake for about half a year so I knew a power bomb but all I could see was flashes going off from cameras and the noise from the audience

Sweetest Victory: Not to sound corny but all of them were the sweetest victories in my eyes. Learned from every one of them but as in “W” in the win column, I’d say Matt Madrid. He was winning that fight and Joey Villasenor told me after the second round, “Bro you’re losing, you have to finish him to win” and I did. Taught a lot about myself that fight

Most Bitter Defeat: Hard to say, there’s 3 defeats I feel I had and let them get away. Richard Villa I guess would be the one on top. I felt I was winning that fight, felt stronger. Just made a mistake and got caught. I was on a 3 fight winning streak and I know it’s not a long winning streak but it had made me confident so when you lose, it just got to me. And obviously the injury. (Torn ACL in elbow from the Keylock submission)

The diversity that engulfs the career of Ramirez in terms of promotions, opponents and location of bouts leads to Ramirez having a plethora of knowledge in the fight game. Knowledge he passes down to his fighters at Westside Power Gym.

Best Wrestling: Brandon Hasley for my first Bellator fight in Cali. He was an alternate for Daniel Cormier in the Olympics,  dude was a beast. Strong! He was explosive, technical, all of the above. I tried my hardest to move underneath him. He was good with his hips and never gave me room. He was like 235 when I spoke to him after our fight. I was 206. *Laughs* Big weight difference and that mattered.

Best Grappler/Jiu Jitsu: Honestly that’s hard to say, not making excuses but out of the 5 losses, 4 have come from subs. But out of the 4, for 2 I was out of it. With Ron Verdero, my elbow just dislocated because it was still weak from being dislocated 2 weeks before. With Eddie Larrera I was out when he heel hooked me. Against Villa was a freak slip up and Hasley, I went for a single (yeah, haha) and slipped right into a choke. Honestly I guess I’d have to say then Hasley.

Best Boxer: Antonio Zamora, he kept me at bay using his long legs and kicks but as for the best boxer, I have to give it to Adrian Lopez who I boxed against. He was quick, not a lot of power but was real quick. That’s the difference fighting a guy who’s just boxed his whole life against an MMA fighter, they just work on their hands 24/7. Not kicks, takedowns or jitz.

Best Fighter: Got to be Hasley. He was an Olympic alternate in wrestling, he is still undefeated and 3-0 in Bellator, has beat guys like Shonie Carter and Hector Ramirez. Man. I was pumped for the fight, I was a huge underdog and it was my biggest fight plus it was for Bellator. Here’s a guy coming out of Tito Ortiz’s camp. Suppose to have destroyed me! I wasn’t cutting weight and he was, surprisingly I wasn’t nervous and I was excited like a kid going to school for the first time and wanted to go to school. I was also proud to fight a guy like Brandon. The dude was a f***** strong ass monster, I consider myself strong but damn!

Most Surprising: Justin Guthrie. Only because the promoter lied to me and told me he was just a striker. He just wanted to wrestle. Also Matt Madrid. Means told me he was a banger too then just shot for takedowns.