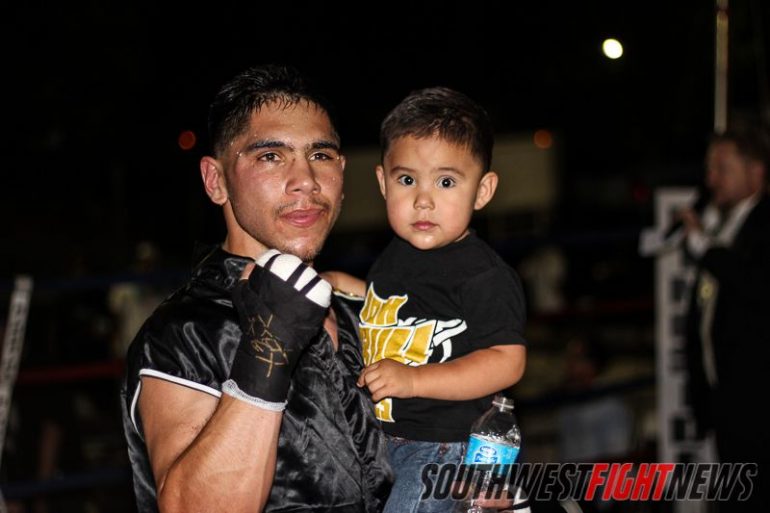 Lira (4-4, 2KOs) who appeared to recruit two cornerman while in Albuquerque, came out tall in a southpaw stance which was matched by Torres. In either stance Torres appeared to be much faster at the lighter 140 pound weight-class.

Midway through the first round, the men’s heads would come together and a cut would surface above Lira’s right eye. Lira would retreat to the ropes where he would take out his mouthpiece and have an odd 8-second conversation with the referee in Spanish.

The fight would continue but to Lira’s dismay he would be on the receiving end of two consecutive over the top right hands that would send him flying to the canvass. Lira would survive the first.

To start the second round, one of Lira’s temporary cornermen would yell “Come on, Fernando!” and would then immediately be corrected by Lira’s father that his son’s name was Francisco. That set the scene for what would come next.

Unleashing a left hand to the body followed by a right cross Torres, would once again succeed in putting Lira down. That would be the last time as well; Lira’s lead cornerman would stand on the ring trying to get the referee’s attention. Lira who appeared he was able to continue would point out to the referee of his corner’s request to stop the fight.

“It was dark out there, I think it was a right hand that stunned him and I saw him wobble and that left hook came in and put him down,” recounted Torres post-fight.

Fight fans can also expect to see Torres and his newfound weight-class for the near future as well.

In the co-main event Shawn Gallegos picked up right where he left off three and a half years ago. The 33-year-old school teacher was full of energy from the onset. His opponent Jeremiah Torres was game and took everything Gallegos had to deliver.

It would ultimately be precise punching and constant punching that would easily allow him to take the unanimous decision.

The only female fight of the night saw Brenda Gonzales return to combat sports action a year after breaking her arm against Rin Nakai in an MMA fight last May. Gonzales defense looked very rusty against DJ Morrison last night, a fighter that is usually overwhelmed by New Mexican fighters.

Gonzales would show very good flashes in the third and fourth nearly ending the fight at the end of each round. Ultimately, Gonzales would have to settle for a unanimous decision.