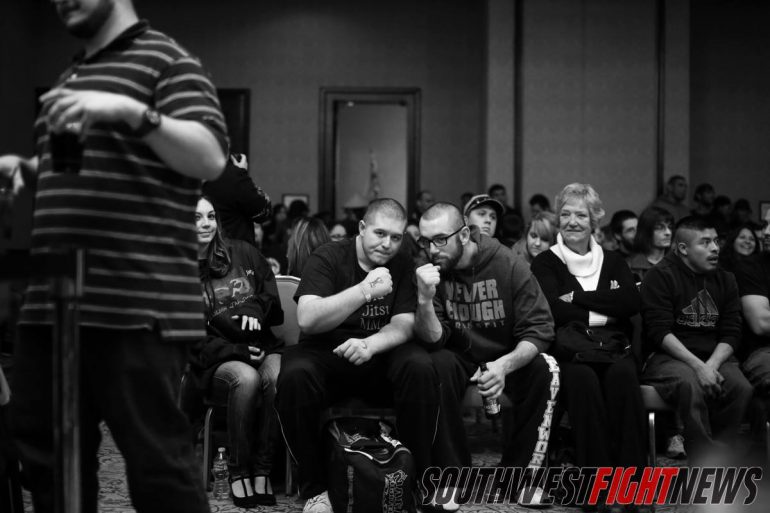 Grants, New Mexico has a population just under ten thousand people and is well-known for their Museum of Mining and the Land of Fire & Ice (Bandera Volcano & Ice Cave) several miles outside of town. While those two attractions are tourists destinations, the town of Grants is home to another gem, a completely different type of attraction. Located on 819 N. First St., the J5’s Jiu Jitsu & MMA gym stands as an attraction for fitness, martial arts, and competitors of all sorts alike to get into shape, hone in on their skills, and feed their competitive drive. Owner, Founder, and Head Coach Joey “J5” Lujan operates a successful gym that hosts people of all ages ranging from young children to adults of all skill level.

Joey Lujan  started training in mixed martial arts with intentions to compete in MMA in the beginning of 2006 and found out very early on that not only did he like to train, but was actually pretty good at it too. Where Lujan found his comfort within the confines of combat training was on the ground where Jiu Jitsu and grappling became an area of success that Lujan would eventually build his career and future business upon.

“I was teaching here in Grants and training at FIT NHB while fighting professionally. I ended up putting together a record of 5-1. Amongst the notable fights of my career, I fought Josh Lanier (Bellator Veteran) in my first professional fight, I fought Javier Rubio and a lot of other tough guys too.” – Joey Lujan

Fight life seemed to be moving along for Lujan who scored five victories in six outings during a two-year stretch. In that time, Lujan would utilize his improving grappling talents to take home three submission wins. Long before the J5 gym came to be, Lujan was aligned with Albuquerque’s FIT NHB gym headed by Tom Vaughn; Lujan noted that Coach Vaughn would contact him after competing in a grappling tournament where he would match up with Tim Means and Rocky Ramirez.

Former fighter turned Coach, “J5” Joey Lujan is quickly making a name for himself through the success of his gym out in Grants, NM and the success of the fighters emerging from under his tutelage.

Success in the combat career seemed to blossoming nicely for Lujan who was being noticed by all the right people and finding himself to be victorious in combat competition. At this point, fate would rear its head and change the path of Lujan’s journey forever. After years of physical punishment and a case of mild Spina bifida, Lujan’s back was in a fragile state and it required major surgery to repair. His whole career was effected by the operation and the future that was once bright, seemed to momentarily dim.

With his health in jeopardy and the ability to train in a high impact sport taken away, Lujan turned his focus to teaching, a skill that he already knew he possessed.

“Everyone had seen early on that I had a knack for teaching, you could say it was like a gift. I always loved teaching.” – Joey Lujan

The J5 gym opened officially in 2010 and was met immediately with obstacles. Despite Lujan wanting to succumb to the problems he had encountered and quit on the idea of starting the gym, he persevered and pushed forward. There was something about inside of him, maybe the passion to teach that kept him moving and he would never let his foot off the gas pedal. Lujan would find allegiance with Skeet Lassiter, founder of the Lassiter Jiu Jitsu system and a Brown Belt in Gi Jiu Jitsu.

“I’ve known Joey since around 2006 and he’s always been great to me, his family and his students. Over the years I’ve trained many people at many places. I noticed right away that there’s something very special about Joey. He understands Bushido and in my opinion this is one of the most important aspects of being a martial artist. Yes, I said martial artist. That’s what he is. He’s not just a jiujitsu fighter. He’s a martial artist. He has a passion for this sport.

Like myself and many of my students, He doesn’t believe in being good at everything. He believes in being excellent at something. I’m very proud of him and all of our students! One of our brothers, Nate Sellers shares a quote that we live by. “steel sharpens steel and respect makes it shine.” J5s Jiu-Jitsu/MMA & fitness center always makes me feel right at home. My jiujitsu is considered “old school”. Like many things in life, Jiujitsu evolves as time goes on. If you don’t evolve with it you’ll find yourself left behind. Joey helps me with the “New jiujitsu”. He helps keep me sharp!

Everyone at his school is very technical and the instruction there is amazing!!! Joey enforces safety, cardio, clean technique, and he puts out a very productive class! It’s a true honor for me to have him as my student and more importantly for me to call him my friend!” – Skeet Lassiter

Through the strong endorsement of his mentor, Lujan’s positive influence in the community of Grants is strong and his presence in the combat sports community is well-received. Lujan operates a successful kid’s program for boxing and Jiu Jitsu, both Gi and no-Gi. With a roster of about thirty-five children, Lujan provides guidance to children ages four through 13 years.

“The most important part of teaching the youth is passing on that respect aspect and instilling in them that winning isn’t everything, good sportsmanship. It is important to teach confidence in themselves in possible street altercation.” – Joey Lujan

Through the dedication put forth into the growth of his fighters, Joey Lujan has shown the true maturation of his abilities that once began as a promising fighter who turned to coaching after major surgery derailed competition ability.

Once a person who walked around with a chip on his shoulder and of the mindset that he always had to prove something, Lujan found his life changed through the dedication he put forth to Jiu Jitsu.

“Jiu Jitsu kills egos and humbles people, it did for me. It also has made me much more confident.” – Joey Lujan

Lujan now oversees a fight team that is currently at seven fighters who train continually at different levels of amateur MMA. Seth Leake, Gerald Aldaco and Anthony DeVargas have all found themselves in MMA action for the King of the Cage promotion with Isai Bartolon set to fight this Saturday for King of the Cage “Future Legends 23” in Albuquerque’s Crowne Plaza Hotel. Rounding out the fight team: Ali Gutierrez, Robert Allen and Manny Godinez, who Lujan holds in high regard. A heavyweight, Godinez has loads of talent and while Lujan labels him a “monster”, he also believes that he will be a Heavyweight Champion one day.

Leake and Aldalco have proved their talents in the last year of competition stealing the show on numerous occasions. The foundation that Lujan is building in Grants is certainly working and he has the vote of confidence from his fighters.

“I met Joey back in December 2011 and I initially had no idea what the experience was going to be when I walked in there. I started attending his cardio conditioning classes because I was overweight and I quickly got results. It even helped me to stop smoking. What kept me coming back was the fact he was very detailed in his instruction. Attending his classes helped me to become more disciplined. He has literally taught me everything that I know about Jiu Jitsu, Muay Thai and MMA. I couldn’t even tell the difference between half guard and side control when I had started.

I like that he never gave up on me. I say that because when I started I was a slow learner. His gym’s environment was friendly and welcoming. Joey and the gym members would encourage me to push myself everyday. We started out as a no-Gi school but Joey has become a three stripe purple belt in the Lassiter Jiu Jitsu system. I, myself was promoted to blue belt this March. I have dedicated myself to his gym and help him with his classes as he instructs the children’s Jiu Jitsu, beginner kickboxing, no-Gi and Gi classes. The amazing thing is that I’m still learning everyday. He has become one of my friends that I have a close bond with.

His gym has been a positive influence in my life and has kept me off the streets and helped give my life some sort of direction. I also see the way children and adults have become more confident and comfortable with themselves after attending his gym. To summarize it. I love his gym and it is part of who I am today.” – Gerald Aldaco

One of Lujan’s many successful fighters, Seth Leake has joined such teammates as Gerald Aldaco and Anthony DeVargas in showcasing the high level training that is happening in Grants, NM under the watchful eye of Coach “J5”.

Lujan focuses his teachings around the premise of technical Jiu Jitsu. The emphasis comes from his belief that many schools do not focus enough on that aspect. He looks to push the students thresholds daily which encourages mental toughness and through the results of his competitors, the system of thinking is definitely effective. In two King of the Cage outings, Seth Leake has yet to log a full two minutes of cage action and Gerald Aldaco has looked downright dominant from top position. Lujan, a veteran of the King of the Cage promotion himself speaks high praises of the promotion who gave him opportunities  five years ago and still today is opening doors for him, only now in the role of a coach and to the benefit of his students.

“King of the Cage is a great organization, they treat us good. The difference of how it all works now is when I started I didn’t have a manager so I would just fight anyone. I didn’t have anyone looking out for me, but now these guys have me managing there careers. As far as KOTC goes we try to stay pretty exclusive, I think the opportunity is there to build a fighter through KOTC  and help them make it to the big leagues (UFC). – Joey Lujan

Experience has definitely benefited Lujan in his gym and coaching endeavors as he was able to experience the combat career life early on and now has the ability to pass that knowledge on to his opponents.

Nicknamed “J5” Lujan referenced the movie “Short Circuit” as the meaning behind the name. Through his infatuation and obsession with Jiu Jitsu, he says that he always needed “more input” and his teammates likened him to the movie’s main character Johnny 5 which of course condensed down for Lujan as “J5”. Through his methodical approach and desire to continue learning, the moniker that Lujan carries both as an individual and over his gym’s brand, it makes complete sense as to how his traits and intangibles correlate to the “Short Circuit” robot. In fact, should Lujan continue on his path of passing his work ethic and passion down to his students, it will come as little surprise if he has his own army of “cyborgs”, a stable of athletes who are well-trained, well-polished, and complete with the heart, toughness and desire to succeed in their endeavors at every level.

Joey “J5” Lujan is a gem to the MMA scene here in New Mexico and his story is one of true inspiration. A once promising competitor turned passionate gym owner, Lujan is wealthy in experience and full of support from the people who has been positively impacted by the concern and compassion of “J5”.