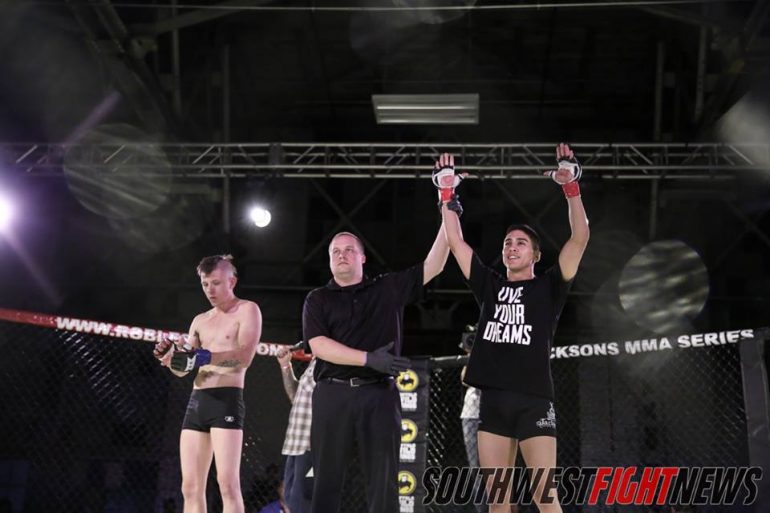 Once you walked into the refurbished Blacksmith Shop, now known as “The Yards” on the old Albuquerque Rail Yards, the hundreds of seat,s and MMA cage that filled it Saturday night, seemed beautifully out of place as two different historical points in Albuquerque’s history crossed.

The ground’s present met the past somewhere during the second fight of the evening when a train announced itself well before pulling up to the venue by roaring its whistle to the unsuspecting crowd and fighters. A roar of approval was returned by the crowd to the train’s conductor and four-man crew who stopped on the tracks parallel to the building to watch the fights through the clear window panes.

It appeared that the crowd of shy of 1,000 would be sent off to hit the town earlier than expected as four of the first five bouts  would end by first round stoppages. As the fights continued the decisions would come. Along with that, more competitive bouts, none better than the co-feature.

In the co-main event of the evening, welterweights Darrell Macklin and Jose Cueto, put on an extremely entertaining technical bout. A strong speed advantage early on for Jackson’s MMA’s Macklin was equally matched by Cueto’s determination. 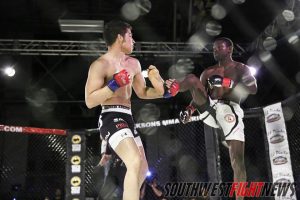 opponent along the cage. The round would end with Macklin rolling Cueto down to the ground into an armbar as time expired. The two men would kneel with their backs to the other for several seconds before finally heading to their respective corners.

The southern New Mexican would find success in the third by countering Macklin’s Thai-clinch with over the top rights. Risking being kicked to the face, Cueto would launch himself at his opponent’s left ankle, in an attempt to take him down. After eating two thundering hammerfists he would succeed and eventually take top position and implement effective work from the guard.

Showing strong conditioning, Macklin would take advantage of a lazy kick from Cueto by easily forcing a taking down and following it with strong ground and pound which included a mixture of thudding elbows and shoulder thrusts. The Jackson’s MMA product would attempt to finish the fight with an arm-triangle from half-guard but like the first round, the bell would prevent a finish.

“He was really durable, really tough,” said Macklin, who expects to go professional two more fights down the road. “He made me push myself to get the ‘W’”.

When Albuquerque’s Ricky Esquibel and Chris Brewer first fought in September 2012, Brewer took the fight on four-days notice. Esquibel would win that fight in 24-seconds via guillotine. It appears that Esquibel just has Chris Brewer’s number. Despite having six weeks notice this time around, last night’s main event would end in a same method but this time, in just 27 seconds.

“It looked like he was a lot more nervous this time,” said Esquibel, who came out of this fight unscathed. “He came out swinging [our first fight] and that’s what I was expecting. This time he didn’t even hit me.”

In his post fight interview, Esquibel said, he would love a rematch with Santa Fe standout Jerome Rivera who handed Esquibel his first amateur loss. For that fight to happen Esquibel would have to go professional as Rivera joined the those ranks a few months ago.

“I don’t know why I said that,” admitted Esquibel. “I’m still trying to get a few more fights for experience. I don’t think it’ll happen anytime soon.”