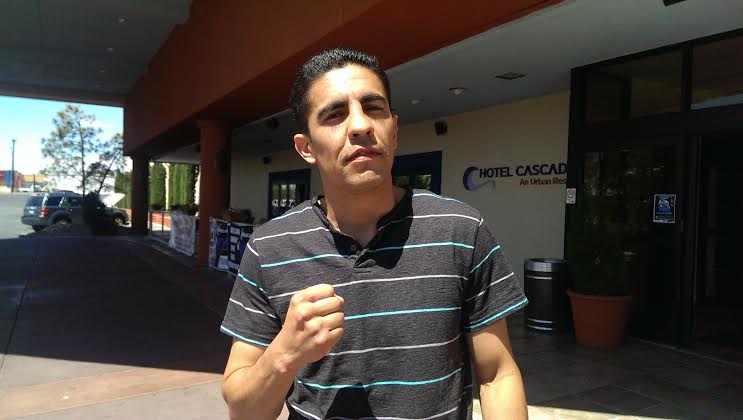 The Las Vegas, New Mexico native will be in his first boxing match in three and a half years when he faces Jeremiah Torres on Friday night’s co-main event at the Cascada Hotel in Albuquerque.

“I never lost a state title no matter what it was,” says Gallegos who stormed through Silver Golves and Golden Gloves would eventually in the year 2000 make it all the way to the Western semi-finals of the Olympic Trials.

At the age of 19 he would commence a productive professional career winning 15 of his first 16 fights. In 2010, he would tear an ACL in the first round of his fight against Marcos Herrera. Gallegos would fight through the pain and hobble away a split decision winner.

Gallegos would later have surgery on his ACL and take time away from the sport of boxing but much of his hiatus was not because he was unhealthy.

“Life just happened,” says the now 33-year-old school teacher. “I just started working and couldn’t really get to a gym.”

Gallegos would take a job as a math teacher at Bernalillo High School while boxing was temporarily put aside.

The the years came and went but his love for boxing did not; that always remained. He would train in the garage of his Rio Rancho home until being recruited by the Team Tapia Boxing Academy where he is now trained by Chris Chavez, a former colleague of the late 5-time world champion Johnny Tapia.

Friday night’s card dubbed Dia de Johnny Tapia is being held by the gym to honor the two-year anniversary of the fighter whose name it holds.

Gallegos excitement for the bout was visible at today’s weigh-in where he did not take the traditional approach of facing the crowd but instead opted to stand sideways on the scale to stare at his opponent and deliver a slicing of the throat motion in his direction.

“I’m not cocky,” Gallegos told us in an earlier interview. “I’m confident.”

The fights take place tomorrow night at the Cascada Hotel in Albuquerque, New Mexico at 7pm.