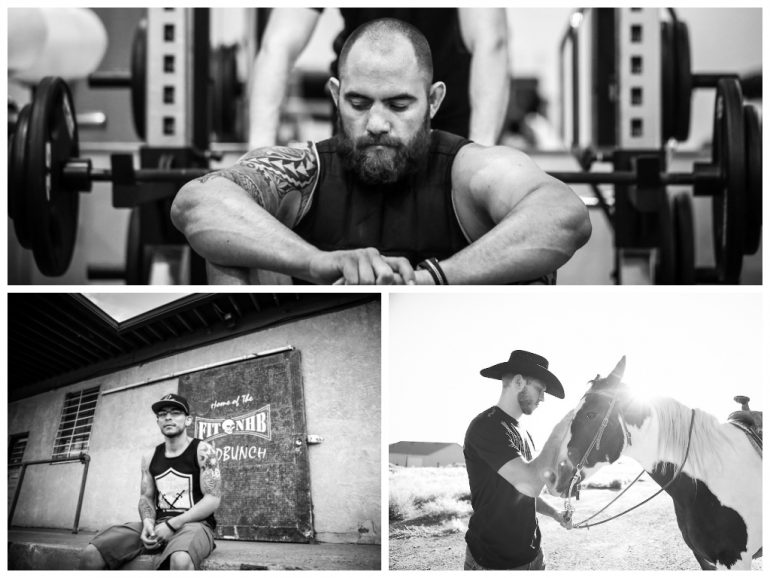 This past Saturday night, the Ultimate Fighting Championship (UFC) held a major event inside the Amway Center in Orlando, Florida. The sport’s premier MMA promotion had a great turnout from Floridians and had a great line-up of exciting fights from the UFC Fight Pass bouts to the Fox Sports 1 prelims and of course, the main card featured on FOX. Amongst the great fights from Saturday night, three Albuquerque trained fighters (one of which homegrown) were in action in marquee match-ups.

FIT NHB’s Ray Borg put on a grappling clinic in his UFC debut. Not only did he earn five takedowns, he dominated on the mat by seizing back control over #13 Dustin Ortiz several times. Despite the fact many scoring the bout favored Borg, the Judge’s cage side gave Ortiz the Split Decision victory.
Photo Credit: David Manning / USA TODAY Sports / via MMA Junkie

In one of the UFC Fight Pass bouts, FIT NHB’s Ray Borg took on the #13 ranked Flyweight Dustin Ortiz on two weeks notice as the Tucumcari raised top prospect went into the bout on the heels of his second round submission finish of Nick Urso at Legacy FC 30 on April 4th. The 20-year old Borg signed with the UFC 30-minutes after that bout and became the second youngest UFC fighter on the roster. Heading into the bout, the unknown status of Borg in the MMA community made the “Taz-Mexican Devil” an underdog to Roufusports fighter Dustin Ortiz.

The fight was exciting and was raved by analysts throughout the MMA world. The grappling was as exciting as you will see and the pace the two fighters pushed solidified how exciting the 125-pound division truly is. Borg showed that he was one of the best fighters in the world and will be competitive at the highest level in the UFC. He took on a fighter who arguably beat the most recent number one contender and was ranked #13 before the bout and did so without a training camp, on two weeks notice.

Borg flashed his extremely explosive wrestling skills and showed the world watching what New Mexico fight fans already knew, that Ray Borg was for real. Early on Borg hit a “switch” countering the acclaimed grappling talents of Ortiz and would lift Ortiz up twice and slam him to the mat. Borg’s wizardry on the mat was in full display and the first round was close, depending on how you score rounds, the wrestling and positional control was definitely in Borg’s favor.

In the second round, Borg showed why he belonged in the UFC and why he graduated from beating regional fighters to fighting the sport’s best. He would get the takedown on Ortiz and swiftly take the back where he would lock in a body triangle and dominate Ortiz for the remainder of the round. He would flatten Ortiz out, landing strikes and threatening on numerous occasions with a rear-naked choke. While the attempts often lead to neck cranks, Borg’s crafty and technically sound Jiu Jitsu skills made a mark in the fight and cemented his prospect status, this time within the ranks of the UFC.

In the third round, Ortiz fought to keep the fight at distance where he was able to land some solid strikes on Borg but the most significant strike of the round, and arguably the entire fight was a flying knee from Borg that landed flush and bloodied Ortiz. The jumping attack feinted the lead knee allowing the rear knee to come up and clip Ortiz flush, the round would hit the mat once again where Borg would show his dominant transitional grappling once again.

The judge’s scored it 29-28 twice in favor of Ortiz awarding him the split decision victory; many argued that it was the wrong decision including several national media sites who scored the fight in favor of Borg, some even awarding him all three rounds. Despite the loss, the 20-year old Borg put himself on the map as a legitimate threat at 125-pounds and quite possibly a potential Flyweight contender in the UFC. Many around the MMA media nationwide raved over the performance of Borg labeling him as a “diamond in the rough” and the “future of the Flyweight division”.

In one of the marquee match-ups on the main card, Donald Cerrone of the Jackson-Winkeljohn gym took on the Brazilian Edson Barboza in a bout that screamed “Fight of the Night” prior the event’s start time. Both fighters were exciting strikers who had finished several opponents with their respective talents and the two fighters promised to bring in their healthy dosage of excitement together to create a match-up fight fans salivated for.

The start of the bout didn’t go as planned for Cerrone, as he took immense damage from the punches and kicks of Barboza. Cerrone was stunned and dazed several times in the opening minutes of the bout and it seemed as if Barboza was imploring the blue-print that previous Cerrone opponents had laid out to get in Cerrone’s range, in his face and be extremely offensive. Those watching thought that it would be only a matter of time before Barboza found a fight ending sequence.

Cerrone had other plans. Despite being out punched and kicked, Cerrone hung tough long enough to snap a jab out that dropped Barboza and rendered him dazed. Cerrone would bypass the ground and pound instead jumping immediately to the back where he would sink in a very tight rear-naked choke to earn a very fast tapout from a still-dazed Barboza. The fight ending killer instinct displayed by Cerrone shows that he is still one of the most dangerous 155-pounders in the world.

The win was one of the best come-from-behind victories this year and notched Cerrone yet another UFC post-fight bonus. The win will keep Cerrone in talks for big fights down the road, UFC President Dana White even mentioned a future contender bout. While he isn’t going to get a title shot as long as Anthony Pettis is the Champion and Ben Henderson is the top contender, Cerrone is always good for exciting match-ups and post-fight awards meaning he will be on UFC main cards for a very long time.

I have always wanted to see Cerrone fight Cole Miller in a grudge match but it doesn’t seem like that fight will happen. There is genuine bad-blood there and that fight would be all sorts of fun. I think Cerrone will actually be propelled back up the ranks of contenders and will end up facing someone like Josh Thompson. I am more partial to see him against someone who holds his high-regard for post-fight bonuses, some like Jim Miller. 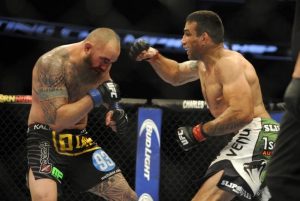 Despite a strong first round, Travis Browne would never find his rhythm and opponent Fabricio Werdum would win a Unanimous Decision and earn the right to called the UFC Heavyweight Number One Contender.
Photo Credit: David Manning / USA TODAY Sports / via MMA Junkie

In the main event for the UFC On FOX 11 fight card, a Heavyweight Title eliminator to determine the number one contender for Cain Velasquez’s title was held pitting Albuquerque trained Travis “Hapa” Browne and Brazilian grappling wizard Fabricio Werdum against one another. The bout would start fast as Browne was able to push the pace and find an opening to stun Werdum; unfortunately for Browne, Werdum went to his back where he was able to survive the onslaught and work from the ground where Werdum is world-class in talent.

A seemingly tired Browne would emerge in the second round and Werdum would start to take over, utilizing takedowns and his Jiu Jitsu talents to compliment his much improved striking arsenal. Where Browne was supposed to hold the advantage was from distance as he was the much longer limbed fighter but Werdum worked a wok-horse like pace pushing a tiring Browne to the limits over the course of five rounds. Werdum would win the fight convincingly and become the UFC number one contender, Browne would find out post-fight that he accumulated several injuries that definitely could have effected his performance. A broken hand and cracked ribs were two of the worst mentioned and through that announcement, Browne’s toughness would come to the foreground.

It appeared as if Werdum had also hurt his hand, but he continued to use it to keep Browne from every getting into a rhythm in the fight. Werdum shook out his hand throughout each round and adjusted his glove on several occasions. Still, Browne should true grit and toughness never giving up during the bout. While he took the loss, the Jackson-Winkeljohn fighter is still a top Heavyweight and will in the mix of things again after one or two victories.

Many have praised the improvements made in the MMA tool set of Werdum, who has now defeated the legendary Fedor Emelianenko, Roy Nelson, Antonio “Minatauro” Noguiera, “Bigfoot” Silva and Browne; he has one of the most impressive resumes in the Heavyweight division. Browne now suffers his second defeat but still has an impressive resume of his own to boast; a bout with Alistair Overeem would have been exciting but the news is that Alistair Overeem will be joining the very gym Browne trains, where he will now be part of the roster at the Jacksons-Winkeljohn gym. A fight versus the winner of Junior Dos Santos/Stipe Moicic will get Browne back in the title picture and a fight versus Blackzillian Matt Mitrione would be a good one too.
That’s a wrap fight fans, what did you think of the UFC On Fox 11 event? What stood out to you the most from our New Mexico trained fighters?