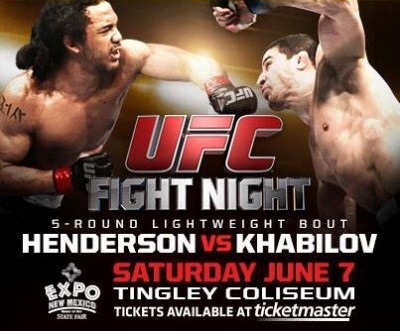 Today, at 10am MT, Ticketmaster.com will open sales for June 7th’s UFC Fight Night: Henderson vs. Khabilov (aka UFC Fight Night 43) event  at the Tingley Coliseum in Albuquerque, New Mexico, to the general public. The main event will feature a lightweight bout between former UFC champion Benson Henderson (20-3) and Albuquerque trained Rustam Khabilov (17-1) of Jackson’s-Winkeljohn’s MMA.

Tickets can be purchased by clicking Ticketmaster and run between $60 for the furthest bench seats, and $170 for cageside. These prices are actually more affordable than similar UFC shows in Cincinnati and San Antonio.

Doors at the Tingley Coliseum for UFC Fight Night- Henderson vs. Khabilov, on Saturday June 7th will open at 2:30pm MT with the first bout set to take place at 4:30pm MT with the main Fox Sports 1 televised portion of the card starting at 8pm MT.