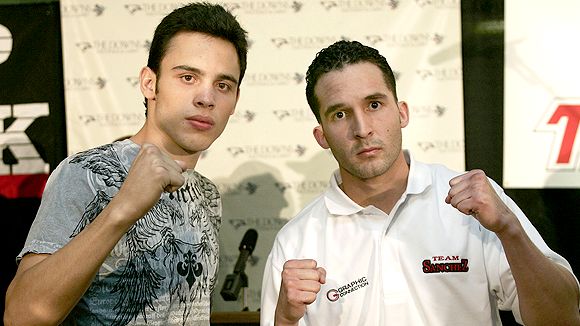 If the UFC’s first event in Albuquerque outdoes the last major national combat sports event at Tingley Coliseum, we’re in for one hell of a night

On June 7th the UFC is scheduled to host its first event in the state of New Mexico when UFC Fight Night: Henderson vs. Khabilov takes places inside Albuquerque’s historic Tingley Coliseum. The 11-bout fight card is already stacked and guaranteed to be one of the best combat sports events to ever take place in the venue’s 57-year-old history.

Can you believe it’s been almost seven years since the last major combat sports card at Tingley? I of course am talking about December 1st, 2007’s Top Rank pay per view boxing card, “Latin Fury”.

Roughly 6,200 boxing fans showed up to Tingley Coliseum that night to see Albuquerque’s Ray Sanchez III (20-1, 15KOs) take on Julio Cesar Chavez Jr. (33-0-1). Despite the fact that he was in his hometown, Sanchez would face a legion of Chavez fans that seemed to nullify the cheers for the local fighter.

Fans were in a for a treat in the evening that featured a champion defending his belt, Ivan Calderon; two future world champions, Chavez Jr. and Mike Alavardo; a future four-division champion in Jorge Arce, and former champion Medgoen Singsurat.

I was a college student covering the fight week activities for a school project and was granted special access due to my relationship at the time with the Sanchez family. This could have been the first fight I was ever credentialed to but instead I chose to attend it as a fan with my pops and a friend.

Opening the pay per view portion of the card was the –at the time– up and coming Alvarado, in what was supposed to be a stern test against former Contender Season 2 participant Michael Clark. The two would exchange blows in a frantic first round in which Clark would be forced to retire due to a hand injury.

In a classical Puerto Rico vs. Mexico contest, Calderon and Juan Esquer would put on a thrilling fight. To the chagrin of the pro-Mexican crowd the judges would award a (rightful) unanimous decision to Calderon as he would succeed in defending his WBO light flyweight title for the second time.

In the evening’s co-main event, just two fights after losing the WBC super flyweight title, Mexico’s Arce took on Singsurat. The Thai fighter is most notably recognized for being the first man to stop Manny Pacquiao in 1999 in the process also taking the future legend’s WBC flyweight title in the process. In ferocious fashion Arce would shockingly end the contest in the first round sending the pro-Mexican crowd into a frenzy.

The evening’s highly anticipated main event between Sanchez and Chavez Jr. then followed suit. From the onset it was clear that it would be Sanchez‘s slick boxing against Chavez’s power punching.

Having a large amount of success in the first four rounds, Sanchez would build an early lead on the scorecards. His lateral movement and activity would diminish as the middle rounds would come, and to his credit, Chavez did a better job of stalking Sanchez and cutting the ring off on him.

Sanchez decision to remain in the pocket would turn out to be the opportunity Chavez needed as he would eventually knock Sanchez down in the sixth. A kneeling Sanchez would give a blank stare across the ring to his trainer and father, and would not rise in time to respond to the referee’s 10-count.

At the time of the finish, the four to one underdog Sanchez, was up by three rounds on two of the judges scorecards.

A solid card provided a great night of fights in the 505 that Saturday. Could June 7th’s UFC Albuquerque card help revive the city as a national hotbed for big fights? One certainly hopes so.

Tickets to UFC Fight Night: Henderson vs Khabilov are on sale and can be purchased on Ticketmaster.com. This loaded card features New Mexico natives Diego Sanachez in the co-main event and John Dodson on the undercardl; both are former world title challengers. Also on the card are Albuquerque trained fighters Rustam Khabilov in the main event and Erik Perez on undercard.

[…] since Ray Sanchez III took on Julio Cesar Chavez Jr. in 2007 have we seen a bout with so much significance for a boxer from […]