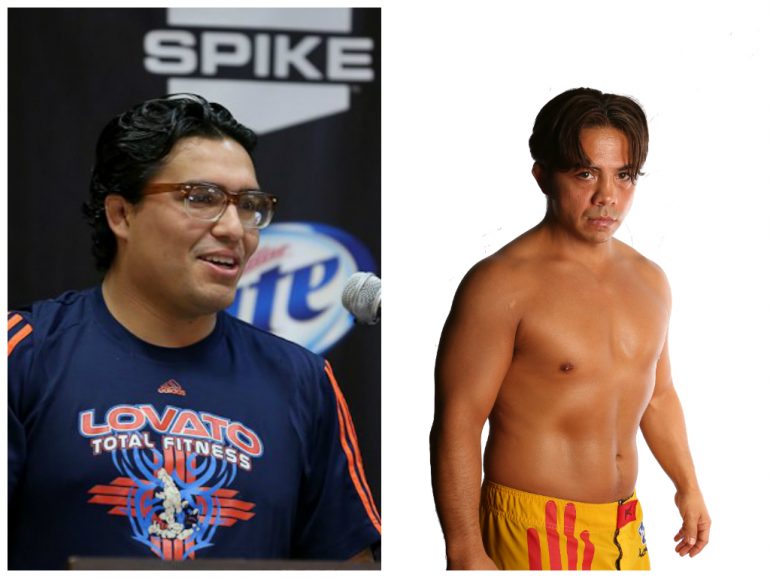 When the Legacy FC promotion rolls into town and joins forces with Fresquez Productions to host a monumental event inside the Route 66 Casino on Friday night, the storylines will be Holly Holm heavy with an emphasis on the Flyweight tile between two of the states premier local fighters. The Legacy FC 30 fight card is far from top-heavy however, the line-up is full of notable fights and fighters and within those fights it is easy to pick out storylines of intrigue. While we covered Holm in part one and the Bantamweight fight between Adrian Cruz and Henry Briones in part two, part three deals with a duo of fighters that are easy to recognize as two of New Mexico’s true MMA pioneers.

During the time period between 2007 and 2009, it would be hard to find two names more popular than that of Mikey and Lenny Lovato. The fighting Lovato cousins played a huge role in carrying New Mexico MMA on their backs for those three years as they would amass a combined record of 18-1 and become the most polarizing figures within the Southwest Cage Association promotion. The duo have fought on seven cards together, marking Legacy FC 30 their eight. In that span, in only one occurrence did both cousins not come out with wins.

A local match-up, Albuquerque’s Lovato (10-3) will take on Belen’s Gene Perez (3-6) in a Flyweight bout that screams redemption for both fighters as they are coming off of losses in their last outing. Lovato and Perez clash stylistically and couldn’t be more different in their fighting styles making this Legacy FC main card bout one of intrigue and the results undoubtedly will be decided by which fighter plays to his strengths the best.

It is time for Gene Perez of Belen to wrap his hands to prepare for combat. He takes on powerhouse wrestler Mikey Lovato at Legacy FC 30 this Friday night.

There is no secret to Lovato’s strength in MMA as the Flyweight fighter is a powerhouse wrestler with an impressive wrestling pedigree. A technical and methodical approach to takedowns and ground and pound is Lovato’s bread and butter. In 10-career victories, Lovato has compiled an eighty percent finishing rate with six TKO’s and two submissions; the smothering top game has played a huge role in each and every Lovato victory. Not only is Lovato a workhorse in his top-game grappling, but his takedowns can be powerful as well. Lovato has picked opponents up off their feet in the past, with deep single legs and blast double legs, and also with highlight-reel suplexes.

Being a shorter Flyweight, his height may be of detriment in the stand-up but it works positively in the grappling aspect of the fight as it makes his leverage ability and wrestling talents that much more dangerous. Lovato is very explosive and strong; when he latches on to the torso or a limb, most fighters will be headed to the mat.

Leading the operation of Team Perez out in Belen, Gene brings a boxing eccentric approach to the cage; embodying the epitome of a stand-up fighter, Perez has earned every career win by strikes and has fallen to submissions in each loss. Tough-nosed and durable, Perez is dangerous every moment the fight stays standing and he gains rhythm in his strikes. Perez has a very technical approach to striking and has the intangible of power in both hands making for the four-ounce gloves a detriment to anyone on the receiving end of his punches.

Lovato has fought since September of 2011 and much as changed in terms of the landscape of regional MMA here in New Mexico. To put the different in experience for these fighters, Lovato’s last career victory was just two months after the professional debut of Perez. This will be a true clash of styles and MMA status; Lovato represents the wrestling base while Perez contrasts with his striking foundation, Lovato represents the “old school” of New Mexico MMA and Perez is from the current era of developing fighters. The similarity is that both fighters are on losing skids and will come into this bout hungry to right their ship and get back on the winning track.

I believe the fight will be decided by which fighter imposes their game plan the best defensively. We know that Lovato can wrestler and Perez can strike, but which fighter will be able to fight in reverse to keep their strength dictating the pace of the fight? Can Lovato get past the long reach and striking talents of Perez in order to get inside for the takedown? Will Perez be able to implore the footwork to keep Lovato at distance and if taken down, can he get back to his feet?

“The Godfather” Lenny Lovato (8-2) is in a similar position to that of cousin Mikey; he is on a losing skid after winning his first eight career bouts and will be driven to get back on the winning track. During his run of eight wins, Lovato was primed to be the next flourishing star to emerge from New Mexico; after suffering his first two career losses, Lovato would struggle to stay healthy enough for active competition. Lovato was last seen fighting for Bellator MMA over a year ago and will now return to MMA action for a shot at redemption.

The fun natured Lenny Lovato Jr. will turn to a serious and calculated combat fighter on Friday night when he takes on the talented Kamarudeen Usman of Florida’s Blackzillian MMA gym.

Looking to stop that from happening, 25-year old Blackzillian fighter Kamarudeen Usman (3-1) of Flordia comes into the bout on a two fight win streak and poised to make a name for himself on a televised event against a hometown fighter. Usman has been a force of nature in his short career; the powerful punching fighter has finished all three of his opponents in victory by strikes and in his last outing he needed little more than 91-seconds to put his opponent away.

Maybe unknown to most, Usman was an accomplished collegiate wrestler winning a NCAA Division II Championship in 2010. His power translates well into his clinch and grappling skills as Usman has the power and ability to drag an opponent down technically and forcefully. While he may look to come out in a striking stance, Usman has those collegiate credentials in his back pocket to use anytime he chooses.

Lovato Jr. (son of Coach Lenny Sr.) is a well-rounded fighter with his career victories nearly evenly split between knockouts and submissions. During his win streak, Lovato was very good defensively as he countered two opponents with front chokes leading to Brabo Choke submission victories. Lovato is a solid wrestling coming from the deep-rooted wrestling pedigree of the Lovato’s and will compliment his takedown talents with his very fluid striking skills.

As Usman’s record indicates, the Floridian will want to keep the fight where he is domination position, a place where he can unleash his knockout inducing power. Lovato can always rely on his wrestling background when the going gets tough on the feet, both of Lovato’s career losses have come via strikes and if he were to implore some of the takedown abilities he used to trail blaze through New Mexico MMA years ago, he will have an advantage on the ground. Usman’s lone career loss came via rear-naked choke. Should Lovato get top position and work his way to dominant positions, Lovato not only has the ground and pound to finish it, but he has the submission chops to secure an end to the fight.

Usman’s wrestling credentials could stifle Lovato’s wrestling efforts and this fight may come down to a war of attrition where Lovato has to pick shots avoiding Usman’s power and Usman will have to be careful not to make a mistake when looking for takedowns as the crafty Lovato is very talented from the sprawl and front-headlock position.

The Lovato fighting cousins return to MMA action fighting on the same card once again. We encourage the fight fans to come out and support the locals and the Legacy FC promotion’s first ever event within our state lines. Stay tuned to SWFight for more event coverage, bout breakdowns and analysis.