After His Big Win At Legacy FC 30, FIT NHB’s Ray Borg Signs With The UFC 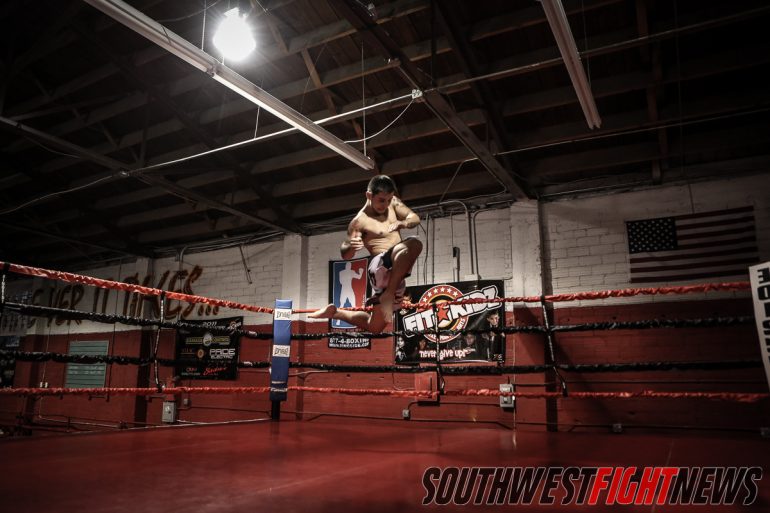 In the weeks leading up to the April 4th Legacy FC 30 event that was held last night inside the Route 66 Casino, much of the talk was dedicated to the Flyweight bout between Ray Borg and Nick Urso. The two 125-pound fighters represented the top of New Mexico’s premier unsigned fighter’s list and they were two of the most talented martial artists currently training in our state.

When Ray Borg (6-0) took on Nick Urso (7-2), the odds favored Urso in just about every argument that a fan, analyst or odds maker could make. With the victory, “The Taz-Mexican” Ray Borg proved a lot of doubters wrong and solidified what his supporters have known for a long time, that the 20-year old fighter had unlimited potential and tremendous talent.

In this past Friday night’s featured Flyweight bout, Borg showcased his wrestling, striking and grappling but most importantly his ability to transition from each smoothly and fluidly. A lot of fighters have talents in several disciplines but it is rare for a fighter to be able to use all of those talents in unison to compliment each with the others. With the impressive performance, Ray Borg has now propelled himself into stardom. Borg was this past year’s Southwest Fight News “Breakout Fighter of the Year” and now he has taken his talents to the next level by getting the call up to the Ultimate Fighting Championship (UFC).

Southwest Fight News was able obtain the breaking news from Borg’s Head Coach Tom Vaughn. Ray Borg has signed a four-fight deal that inserts the talented prospect into the ranks of the UFC Flyweight Division and we won’t have to wait long for his first fight in the sport’s premier promotion. In under two short weeks, Borg will make his UFC debut at the UFC On FOX: Werdum vs. Browne event in Orlando, Florida and he will take on a very tough opponent, Dustin Ortiz (12-3).

The Duke Roufus trained Ortiz is coming off a loss to former top contender John Moraga and will represent a “golden ticket” to Borg should he be able to get the late replacement victory. At just 20-years old, Borg will be the second youngest fighter currently competing in the UFC and his signing is immensely historical in that it only took six-fights and 20-months to go from debuting as a professional to getting the call from the UFC.

The UFC On FOX event will be an enormous opportunity to showcase his talents as the fight card will be headlined by the UFC Heavyweight number one contender bout between Albuquerque’s Travis “Hapa” Browne and top contender Frabricio Werdum and co-headlined by Meisha Tate and Liz Carmouche..

This is huge news and monumental if you really break down the details of Borg’s career; at 6-0, Borg is still very young in his MMA career but his maturity inside the cage tells a completely different story. The FIT NHB team has really groomed Borg’s career perfectly since his start in the sport stemming back to when he was an amateur fighter.

As an amateur, Borg would go 4-0 and would finish all of his bouts via submission. As a professional, Borg took on an experienced local veteran in his first fight and would fight two other regional fighters from other regions in his two following bouts. His first three fights would end in the first round via strikes or submission and he would emerge as a young fighter to keep an eye out for. His career progression was coming along perfectly.

It came quickly for Ray Borg but his huge win over Nick Urso at Legacy FC 30 has awarded him the holy grail for any regional fighter…. the call-up the UFC.

In his fourth career fight, Borg went up in weight to fight battle tested, local MMA icon Angelo Sanchez in a 135-pound bout. Borg would dominate Sanchez in a way fight fans had never seen Sanchez be dominated and captured his first marquee MMA victory propelling him from fighter-to-watch to legitimate prospect. He would earn the victory over Sanchez in a fight that would award him a chance to fight for Bellator MMA, an opportunity Borg turned down. Most fighters would have jumped at the opportunity; Borg and his team however, had other plans and now it has become apparent that it was the right choice.

Borg would follow-up his win over Sanchez with a title fight victory in Oklahoma for a prominent promotion in that region against a very talented prospect in how own-right. Borg’s opponent Jeimeson Saudino has been described by many to share the fighting style of devastating UFC striker Edson Barboza; it would take Borg a few moments to get his timing down and he would take Saudino to the mat and sink in a fight ending choke. Borg’s career progression was seemingly fluid in all aspects; a few solid regional wins in different regions, a marquee win in his own region and then a title fight against a fellow top prospect.

Coming off the win over Saudino, Borg was matched with Jackson-Winkeljohn product Nick Urso in the very first fight between fighters from these two gyms. In his previous five fights, Borg was brought along perfectly to be showcased in a nationally broadcasted event against a top-named regional fighter who was on the verge of a UFC signing.

It was almost too perfect or maybe just flawless planning on the part of Borg’s team at FIT NHB.

When Borg sunk in the fight ending choke on Urso, it was pretty obvious that something special had happened inside that cage. A star was born in New Mexico and it was only a matter of time before the UFC would dial-up Borg’s management to offer a place amidst the ranks of the best fighters in the world. Borg still has a way to go to be named alongside the best in the world but a call-up to the big leagues is the first step in doing so.

Borg is a true home-grown talent, born in Tucumcari where he started training with former King of the Cage Champion Abel Cullum learning the Cullum Fighting System and after making the move to Albuquerque. Borg would join the team over at FIT NHB to work with his current coaching staff, Tom and Arlene Vaughn, and Jon Judy. The team has already guided Tim Means to the UFC and had significant influence in the polishing of Carlos Condit’s talents prior to his UFC run. The coaches now have another fighter to represent the hard-work coming out of their Albuquerque gym.

We would like to congratulate Ray Borg in his UFC signing and wish him the best in his future endeavors. Borg will join the list of successful local fighters to fight beneath the lights of MMA’s brightest of stages; a list that includes teammate Tim Means and fellow Albuquerque trained Flyweight John Dodson. Send your best wishes over to Borg and his team over at FIT NHB to celebrate this monumental news! And stay tuned for another announcement in the coming days!

“The Dirty Bird” Returns To The UFC, Tim Means Signed Up For UFC In Cincinnati