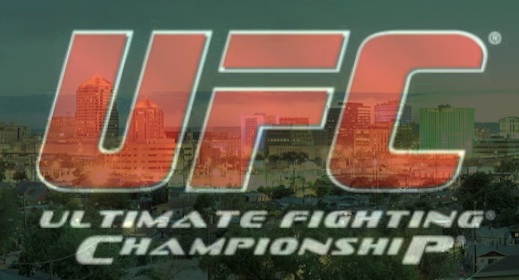 The UFC will finally make its way to Albuquerque, New Mexico.

The day has finally come. All the waiting will come to an end. The support from New Mexico’s rich fight community will finally be rewarded with the premier MMA that we’ve been lacking since WEC 32 came to the area. The Ultimate Fighting Championship (UFC) will bring their successful “Fight Night” series to the “505” and they aren’t holding anything back with the rumored headlining bout.

According to sources, on June 7th, the UFC Fight Night event will be held inside the historic Tingley Coliseum in Albuquerque, New Mexico and the evening’s festivities are expected to be headlined by a Lightweight Title Contender eliminator match between former UFC Champion Benson “Smooth” Henderson (20-3) and Rustam “Tiger” Khabilov (17-1). The #1 ranked contender Henderson is seemingly significantly ahead in his title trajectory then the #13 ranked Khabilov, but the Jackson-Winkeljohn trained Khabilov is currently on a six-fight win streak including three within the UFC ranks.

The event will be the first UFC event to ever be held within the New Mexico state lines and a couple months prior we dove in-depth as to what a possible UFC event would look like. Tingley is a 11,571-seat multi-purpose arena that is listed to have 9,286 permanent seats. The best guess for a seating chart would be to imagine the Jackson’s MMA Series set-up that has traditionally used half of the arena and then imagine that the UFC would likely use the entire venue instead of cutting out a single section like the JMMAS has done.

Breaking into the New Mexico market is a huge accomplishment for the area as New Mexico has long been one of the most storied MMA areas and has long been questioned as to why MMA’s top promotion had never visited the place often referenced as the “Mecca” of MMA. Fight fans have shown their support and loyalty to combat sports for several years and finally the payout will be the arrival of the UFC. Typically, when the UFC breaks into a market they almost always return; a good showing from the local crowd will add to the UFC’s incentive of returning to New Mexico on a normal basis.

There has not been any other bout announcements or rumored participants but we can almost guarantee that a slew of New Mexico based fighters will be called to line-out the show. Since it is a Fight Night show, we shouldn’t expect Carlos Condit or Jon Jones, but title contender John Dodson and fan-favorite Diego Sanchez would be very solid names to add to the fight card. The idea of Leonard Garcia, Tim Means and/or Damacio Page re-joining the UFC ranks will definitely be a lot more likely.

In fact, John Dodson may be a fighter to be expected on the fight card as the Flyweight title contender is returning from injury soon and has been looking for support on social media to take part in the June 7th event.

The UFC announcement will also bring to the table a discussion as to whether it is finally time for Holly Holm to bolster the UFC’s WMMA roster. There is not a better ticket-seller in New Mexico and Holm has the largest fan base of any combat competitor in the state; the UFC would have to give that a hard look as it would make complete sense for the UFC’s first show in New Mexico to feature the state’s premier unsigned combat competitor.

This past weekend, Dana White confirmed that he would be meeting with Holm during the UFC 171 weekend. Reports have surfaced since that Holm is in negotiations to sign with the promotion but each side still need to come together on the terms of the deal. Holm and her team have long pursued a financially lucrative deal that rivals the most established women fighters currently signed in the UFC.

Stay tuned fight fans! We will keep you covered with all of the bout announcements, news and updates for the upcoming UFC in Albuquerque event! I urge the fight fans to join us in celebrating this monumental announcement by encouraging everyone who supports the MMA community to make it our to Tingley Coliseum in early-June to show the UFC that this region is ready for an annually scheduled UFC event!

King Of The Cage Set For April 19th In Las Cruces, New Mexico

[…] today’s Media Day, held two days ahead of the UFC’s debut in Albuquerque, New Mexico, lightweight Ross Pearson (17-6) was shocked to know that he has supporters in the […]