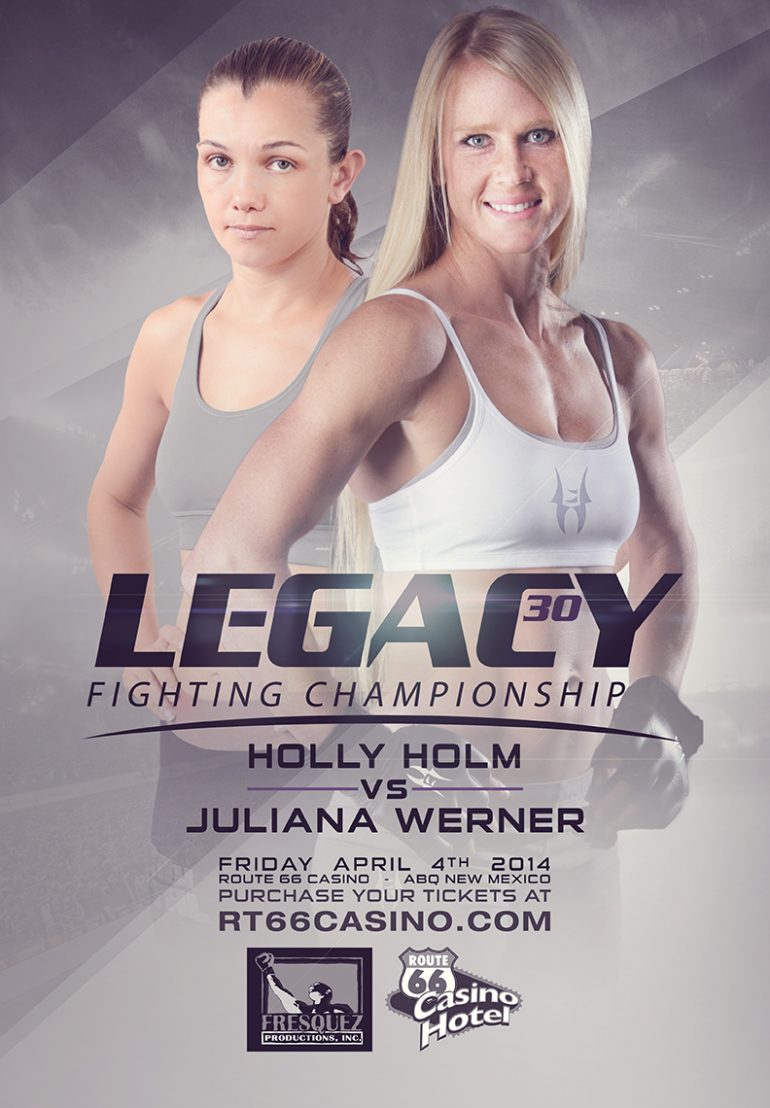 In just a few short weeks, the Legacy FC promotion will travel for the very first time to New Mexico where they will host their Legacy FC 30 event inside the walls of the Route 66 Casino. The event will be headlined by the most polarizing local combat fighter in New Mexico, “The Preacher’s Daughter” Holly Holm in what will serve as her seventh professional MMA bout. Included on the fight card will be several of New Mexico’s most notable and successful mixed martial artists.

The Legacy FC 30 event will be monumental for the area for a number of reasons namely the arrival of another top-tier MMA promotion. Amongst the other reasons, possibly Holly Holm’s last regional fight, the return of the Lovato brothers and a flyweight match-up that is arguably the biggest fight in New Mexico featuring two local fighters (Article coming on that soon).

In anticipation of the upcoming Legacy FC 30 event, SWFight has had its interest piqued by the trending of stats accumulated by the Tapology website. The Tapology page dedicated to the April 4th event includes tallies of predictions made by the site’s community and while the site is well-known for this aspect of the site, we thought that several of the statistics stood out.

First off, at the time of publish, the stats read 100% in favor of one fighter for two (nearly four in total) bouts. The site’s community has unanimously decided that two fighters without a doubt are the favorites to win their respective bouts. Mikey Lovato’s winning pedigree and wrestling background seems to be in high favor for his match-up against the hard-hitting boxing style of Belen’s Gene Perez. Lovato is one of two fighters to have the 100% listing on the Tapology site.

The other is Stacy Cly who is taking on Eric Saavedra. While neither fighters are notoriously well-known, the Tapology community is siding with the pro debuter in Cly over the 8-fight veteran in Saavedra.

Besides the “100-percenters”, there are two other heavy favorites and it should come as no surprise that the very popular and fan favorite Holly Holm would be held with such high regard as she takes on a foreign women who very few fight fans have ever seen in action. Holm is a resounding 98% to 2% favorite on the site and I am surprised that it isn’t a full-blown 100%.

Of the 98% in favor of Holm, 94% believe that Holly will continue her hot-streak of devastating striking displays and finished opponent Juliana Werner by TKO or KO. The remaining 6% have the three rounds of her last fight close to their memory as they believe Holm will win but she will do so by Judge’s Decision.

The minority of fans on Tapology who have picked Werner definitely have a clever fact/opinion tandem when making this un-popular decision. The fact is that Werner is a submission specialist and the opinion is that since nobody has seen Holm’s ground game, that must be where her weakness in MMA is hiding. Six women before her have stood in front of Holm only to be terrorized by strikes and the 2% who picked Werner must believe she will find a way to take the fight to the ground.

The other big-time favorite is a non-local being favored over the local fighter. Kamaru Usman of the Blackzillian fight team in Florida is leaving the humid air of the coastal state to fight in the dry desert heat of New Mexico to take on one of the state’s most recognizable iconic figures of local combat sports when he pairs with Lenny Lovato Jr.

The 3-1 Usman has a commanding lead of 96% to Lovato’s 4% in the minds of Tapology followers. While Lenny has fallen on to some tough times as of late, “The Godfather” was and has always been one of the most successful locals to compete inside the cage. Lovato has lost two straight, in that time span also having two fights be canceled due to injury; making the odds make a lot of sense in context.

95% of fans believe Usman will take a KO/TKO victory back to Florida and add-on to his 100% finishing rate thus far in his young career.

The odds don’t necessarily get more even but they do start to become more competitive statistic wise as we continue to gaze over the fight card. El Paso’s Martin Sano Jr. spent less than 30-seconds in the cage in his last bout and will put his undefeated 3-0 record on the line against the Jackson’s MMA product and Carlos Condit sparring partner Clint Roberts. A few months ago, Roberts defeated a teammate of Sano Jr.’s and did so in just over 30-seconds. The two eccentric finishers should provide an exciting match-up.

Heading into the bout, Sano Jr. is a pretty sizeable favorite at 86% to 14% for Roberts. Of the Sano Jr. support crowd, 79% of those believing he’ll win have picked him to do so via knockout. While the numbers are much smaller for Roberts, his believers tend to feel his best avenue of victory is by decision as 67% of the voters thought Roberts would pick up the Judge’s nod.

Even though it is arguably the most intriguing bout of the night, the Tapology community do not believe that the match-up will be a competitive one. FIT NHB’s Ray Borg enters into the week with the odds stacked against him as Tapology reports a 85% to 15% advantage towards Jackson’s MMA fighter Nick Urso. The two flyweights are set to compete in a flyweight battle that will name the state’s premier 125-pound fighter outside of the UFC.

The statistics get more interesting as you dive in; Urso’s 85% believe that he will go home with a Judge’s Decision as 78% voted for that method. 18% believe that his Mike Winkeljohn and Brand Gibson brand of striking will earn him a KO/TKO victory.

The 15% of Borg supporters feel that his best way to snatch victory away from the favored Urso is to do it by submission. Borg is definitely capable of submitting just about anyone in the lower weight classes and 50% of his believers must share that sentiment. The other 50% is split between KO/TKO and Judge’s Decision.

When Brazil’s Flavio Alvaro steps into the cage in Albuquerque, he will bring with him 55-total fights and a four fight win streak. When you add that magnitude of experience and match it with Albuquerque’s Donald Sanchez and his experience of 42-fights then you will have almost 100 fights in professional experience inside the cage.

The majority of fans voting on the event’s listing feel that Alvaro will walk into the cage with an advantage. 82% of voters selected Alvaro to win and of those, 83% believe that the only way he will take a victory from the tough, hometown fighter is to win a decision on the scorecards.

In the case of Sanchez, his 18% basically believe the same as the pro-Alvaro crowd in that if he wants to keep a victory his own in his hometown that he will need to outlast his opponent over the course of three rounds. Sanchez currently rides his own four-fight win streak and will represent the world-renowned Jackson’s MMA gym after spending several years down the road at the FIT NHB gym. Despite being a prolific finisher, Sanchez currently has only 20% of his voting crowd selecting him to finish the durable Alvaro.

The last bout we will discuss is also the most competitive in voting terms as the 54% to 46% odds are easily the most closest set of numbers heading into the lead up for Legacy FC 30. Judgement MMA’s Adrian Cruz is one of New Mexico’s biggest draws and despite a recent setback is still considered by many to be one of the top-tier regional talents in the area. On April 4th, Cruz draws Enrique “Henry” Briones who is part of the massive wave of Mexican MMA taking over the area. Briones joins such notable names as “Moggly” Benitez and “Dodger” Montano as part of the group that trains at Jackson’s MMA.

Briones currently holds the advantage in what has been a sliding scale that has drawn even and has also favored Cruz. At 54% Briones is currently the statistical favorite and in the most intriguing fight on paper will head into the two-week mark with the lead over the popular local fighter. Of Briones support crowd, 69% believe he will need to bite down on his mouthpiece for 15-minutes to outlast Cruz to a Judge’s Decision.

Rio Rancho’s “Killa” Cruz may be the slight underdog at the moment but he is believed by his supporters to have the ability to handle the talents of Briones and win a Judge’s Decision. 64% of his voters believe that to be true and the other 36% is split down the middle believing that Cruz can actually get the fight finished before the end of three rounds.

Those are the numbers fight fans! Go and check out the Tapology site to follow the numbers and trends as we continue to inch closer to the fight date of April 4th. While these stats have little to do with what we will actually see in the cage, it is a fun way to be interactive as fight fans. We hope to never discount a fighter’s abilities and simply pushed this idea as a way to generate fun discussion amongst fight fans. With that being said, what do you think about the odds and share your own with us in the comment section or on our social media sites!