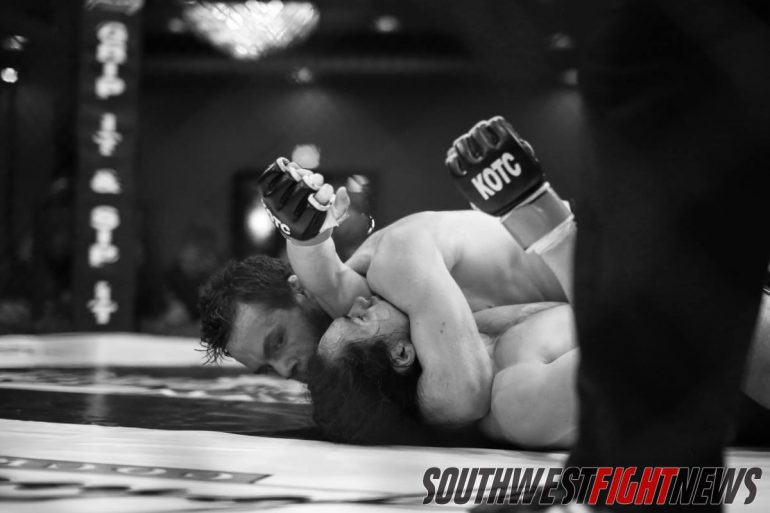 Month two of 2014 is in the books and chalk up another buzz-worthy month of combat sports action. From nationally televised boxing action to some local MMA, the combat schedule for February may have been less busy then January but still carried plenty of weight regardless. Following up on the success of January’s Monthly Award recognition, we follow up with month number two!

Just like last month, we will recognize the month’s best Fighter, Knockout and Submission.

Submission of the Month – Aaron Perls – King of the Cage “Rumble”

Early in the month is where most of the combat action took place and Santa Fe BJJ’s Aaron Perls definitely made his mark in what was his professional MMA debut. The submission was also recognized as our “Submission of the Night” as well. From that award post:

Aaron Perls would leave the Crowne Plaza Hotel with two of our awards as not only did he compete in the event’s “Fight of the Night” but he also pulled off the “Submission of the Night” in a very gutsy come-from-behind performance. After losing the first round definitively, Perls started the second frame with a sense of urgency to get the fight to the ground. Perls fought valiantly for the takedown and once he scored the takedown he wasted little time in improving position.

Perls would transition smoothly into mount where Dixon was not able to find any room to escape or improve his position. Perls would unleash some punches from the dominant position until he found the path for his arm to sneak beneath Dixon’s head setting up the arm-triangle choke. Once the set-up was deep enough, Perls would jump to side control where he’d tighten the choke and await the finish. Dixon appeared to be defending well as he gave the thumbs up to the referee but Perls was too strong and too persistent, and he’d earn the tapout from a very tough opponent.

The intensity is always present for Maldonado (right) but he showed ferocity in his knockout victory earlier this month on the nationally televised Fox Sports 1 boxing event.

Currently blazing through the ranks again to reclaim his top prospect status, Albuquerque’s Fidel Maldonado Jr. was placed in a bit of a pickle for his nationally televised boxing main event bout. His original opponent was a late-scratch and he was thrown into the ring with a tough Puerto Rican.

Stalking Nater early in the 4th, a set of mean left hooks that would land for Maldonado while cupping Nater’s head with his right hand, once again hurt his body, sending him back to the canvas at the 02:08 mark. Nater would make it to the end of the round but it would be during the minute rest period leading to the fifth, a commercial break for the television audience, that he and his corner would decide to call off the contest.

Fighter of the Month – Kevin Croom

Croom ended the month (literally) with an emphasis. Croom won his ninth consecutive MMA bout in Kansas City, Kansas for the Titan FC 27 event against arguably his toughest opponent to date. “The Hard Hitting Hillbilly” went three rounds with Bryan Goldsby in a fight that left many on the edge of their seats.

The MMA Corner had a nice recap of the bout:

Kevin Croom and Byron Goldsby went to a close decision in a bantamweight bout. Goldsby was on top for the majority of the first round, but Croom stayed very active from his back. Croom returned the favor and spent the majority of round two on top. The third round was back and forth again, but Croom took control about halfway through and got the decision win.

With the win, the unprecedented run by Croom continues which now spans nine consecutive victories in just over 15-months. He is definitely knocking on the door to the UFC and he is now slated to take on the very tough Anthony Birchak for the Maximum Fighting Champion (MFC) Title in May.