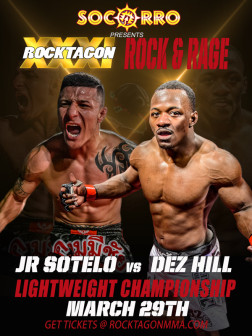 The Rocktagon MMA promotion has become a staple of Southwest MMA as they have stood on the fence between New Mexico and Texas for several of their most recent shows. Promoting shows out of El Paso, Texas creates an outlet for fighters from both states to fight close to home but travel enough to get the experience of fighting on the road. Rocktagon MMA also offers very professional production value and with thirty fight events in the books, there success has withstood the test of time.

On March 29th, Rocktagon 31 will be live inside the Socorro Entertainment Center in El Paso, Texas. The show will be part of the promotion’s “Rock & Rage” series of shows. The “Rock & Rage” label indicates that the event will also feature a stage to host a live band to compliment the MMA bouts lined up. Currently, ten match-ups line the fight card and while many of Rocktagon’s regulars will be in action, a few New Mexico fighters will also be featured on the fight card.

At the last show, Rocktagon 30 would feature three fighters from Albuquerque’s FIT NHB; this time around it will be two fighters representing the prominent gym. Lance Friedenstein (5-1) will make his return to MMA action after four and a half years of inactivity. The heavy-handed heavyweight holds four career victories by TKO and will take on a California heavyweight with a 2-1 record named Josue Lugo.

Nathaniel “The Game Dog” Baker will also end a lengthy hiatus when he takes on Brandon Seyler of Dallas, Texas. Baker (2-5) is a veteran of New Mexico MMA having his first fight date back all the way to July of 2000. The FIT NHB fighter has been in the cage with such notable opponents as Belen’s Gene Perez and the UFC’s John Moraga.

Also in action is Las Cruces fighter Alan Lerma who took a controversial decision over FIT NHB’s Tim Sosa in his last Rocktagon outing. Lerma will take on the very popular Paco Castillo in a match-up that can be chalked up as an early “Fight of the Night” candidate. Castillo’s brother Angel will also be in action.

A few other Las Cruces trained fighters will be in action as Randy McCarty and Steven Ortega will also step into the Rocktagon cage.

The main event of the evening features a bout between Desmond Hill and Rodrigo Sotelo who will be fighting for the Rocktagon Lightweight Championship. Sotelo is a fan favorite in the area and a very iconic figure within the Rocktagon roster while Hill is also fast rising in popularity. The two dynamic fighters will headline a fight card that will be complimented by the live music of Grind, A Tribute to Alice in Chains.