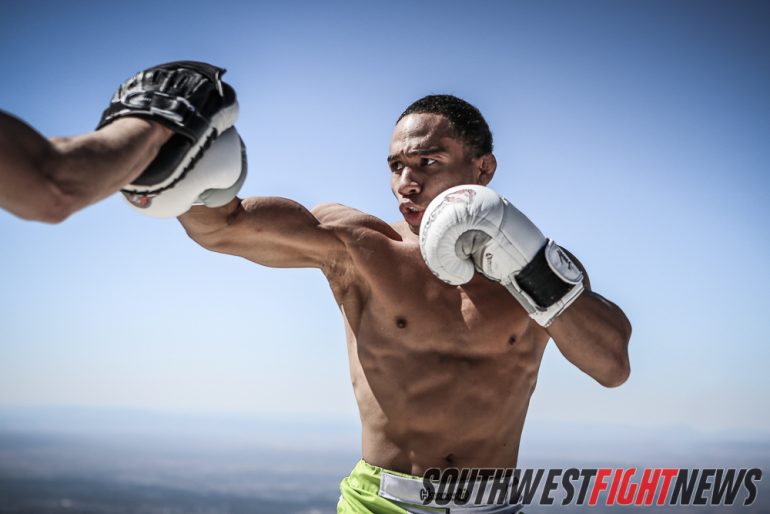 It was announced last week that the Ultimate Fighting Championship (UFC) was finally making its New Mexico debut. In our article, we announced that Rustam Khabilov would take on Ben Henderson in a “Fight Night” event on June 7th inside Tingley Coliseum. At that time, details were scarce and outside of the main event announcement, there was not word yet as to what other locals would be competing.

That has now changed.

According to several sources, Top Flyweight Contender John “The Magician” Dodson has been pegged to represent his hometown on the first UFC fight card in the state’s history. Dodson (15-6) has won six of his last seven, his lone loss in that span was a close decision to current Champion and ranked pound-for-pound fighter Demetrious “Mighty Mouse” Johnson. Dodson will be returning from an injury that kept him from action recently, his last outing was in October of 2013. In that bout, Dodson would show his tremendous power once again, knocking out Darrell Montague in the first round of UFC 166.

Jackson-Winkeljohn’s Dodson will compete in his hometown of Albuquerque against a familiar foe; John Moraga is currently the targeted opponent for Dodson and the pairing will be a rematch of their 2010 fight outside of the UFC organization. Moraga (14-2) is a former title contender and is a winner of eight of his last nine, winning his last bout via split decision back in January.

The two talented fighters fought in Puerto Rico as part of the now infamous MMA Global Invasion event that received loads of negative publicity for the way the event was handled by the promoters. Dodson would defeat Moraga via unanimous decision and would go on immediately after to win the Ultimate Fighter contract at 135-pounds and then become a staple of the UFC’s Flyweight division.

The match-up marks the first announcement of a local fighter and we should expect several more being announced in the upcoming weeks. Diego Sanchez is another name being thrown around discussions but has not been confirmed by any verified sources. Stay tuned to SWFight for all your UFC “Albuquerque” coverage, bout announcements and analysis.