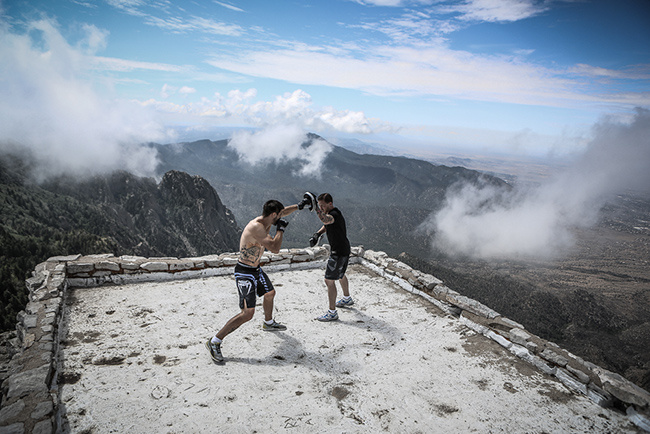 The New Mexico Tourism department does a fantastic job at promoting the state and all the amazing sites and adventures that are found within our state lines. The State of New Mexico website features a segment called New Mexico True Stories where videos are showcased emphasizing adventures and stories from around the state that includes a video on New Mexico Governor Susana Martinez. the Angel Fire zip line and the burning of “Zozobra”.

Today, UFC Top Contender Carlos Condit was featured on the professionally impressive site (click here to view) and in a short video, Condit is portrayed as embodying the true essence of what it means to be a New Mexican while also showcasing the intellectual and emotional side of the combat fighter.

A quote from the New Mexico True Stories site really sums up the direction of the two-minute video.

We know that New Mexico is the best and baddest state in the union. We’ve got the meanest cage-fighter, the biggest elk, the strongest trout, the hottest and most flavorful food, the most iconic living writer, the first wilderness area and spaceport, the birdiest desert oasis, and the most summity Everest guide of all time. We just want everyone else in the state to appreciate these things, too.

The video begins slowly with Condit amidst fight preparations with short “flashback” videos of past moments mixed in the fray. The voiceover of Condit speaks emotionally about his rise and fall as a mixed martial arts champion and his climb back towards winning the World Title again with relation to the struggle and the hardships that come with it all.

Condit’s training at the crest of the Sandia Mountains is beautifully displayed at a place called the “Rock House”; the old Ranger Station has now become a beacon for Condit to train and hit mitts with one of his coaches, Brandon Gibson. Training in the thin mountain air, Condit continues to talk about his outlook on fighting and how the quiet training compares to 20-thousand roaring fans.

The Albuquerque native then speaks of the emotional relation to the people of his home state when he shares this gem of a quote:

We are all fighters in New Mexico, I’m no different. It’s just that my fight happens in the cage. – Carlos Condit

The video ends with an aerial shot of the vast Albuquerque landscape where Condit is shown running atop the hills. It is a great video that is full of emotion and inspirational vibes. It is definitely worth the two minutes and six seconds to watch.

Carlos Condit truly embodies the spirit of New Mexicans and has been a great ambassador as one of the state’s most visible and successful sport’s icons. As the first UFC Champion to be a native of New Mexico, Condit has always been a model of class and respect in the physical demanding sport and has always representing his roots of New Mexico throughout his career journey.

Condit will fight this Saturday night in the co-main event for UFC 171 live on pay-per-view. Already a top contender, it is well-known that a win for Condit over fellow contender Tyron Woodley will earn the New Mexican fighter a shot at the UFC Welterweight Title.