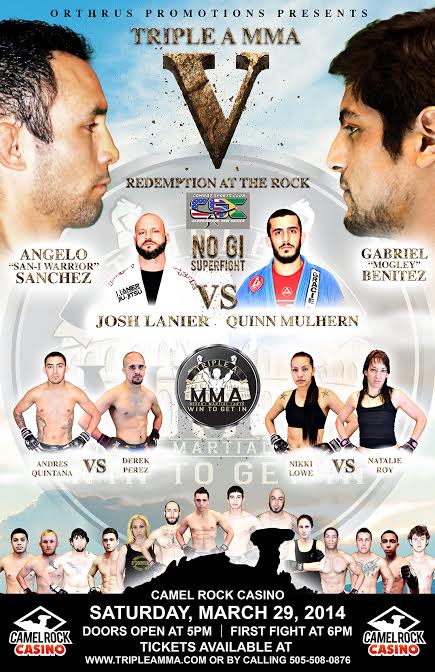 The Camel Rock Casino will play host to its first MMA show of the year when “Triple A MMA V: Redemption at the Rock,” takes places inside the Rock Showroom on Saturday March 29th.

A compelling featherweight main event will take place as Pojoaque’s Angelo “San-I-Warrior” Sanchez (12-5) takes on Jackson’s-Winkeljohn’s, Mexican prospect, Gabriel “Moggly” Benitez (15-4). After a tough 2013, both men look to get back on track in 2014. A win for either fighter would definitely open up avenues  on the national scene.

Another featherweight bout makes up the co-main event as Luttrell MMA prospect Andres “The Bullet” Quintana (4-1) takes on Derek Perez (4-2 record reported on press release – 1-0 record according to Sherdog.com) of Perez Fighting System.

The jiu-jitsu match we asked for in last month’s Five Possible “Superfights” We’d Like To See In 2014 will be featured on this card as a unique No-Gi Submission-only Superfight between grappling aces Josh Lanier and Quinn Mulhern takes place. Both men are coming off recent retirements from mixed martial arts.

The event, sponsored by Orthrus Promotions, starts at 6pmMT. Tickets start $20.00 and are on sale now at www.TripleAMMA.com or by calling 505-508-0876. See the full fight card below.