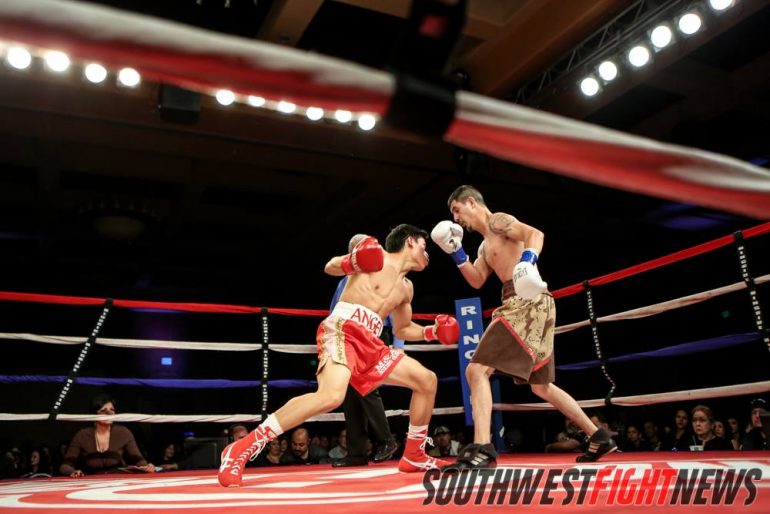 We have finished one full month in 2014 and already the area has had some great results from the boxing and MMA scene here in New Mexico and surrounding areas. With the heavy volume of combat action happening in the area and featuring the area’s athletes venturing around the nation, we have decided to acknowledge some of the best performances on a month-to-month basis. January 2014 will be the first month that Southwest Fight News lists award winners for Fight of the Month, Submission of the Month and Fighter of the Month. On occasion we will also toss in some miscellaneous awards as well.

The month of January has been busy, one week even featured New Mexico’s athletes from Thursday evening all the way to Saturday late-night. We have had a health month of action that included an MMA and boxing event in New Mexico as well as in El Paso. But who were the stand-outs of the month that has past? Let’s find out.

It was bloody and it was vigorous but FIT NHB’s Turrell Galloway put on a methodical showing in El Paso, Texas when he took on a very game opponent in Paco Castillo. While Castillo has quite the name in New Mexico fighting such names as Josh Montoya, Frank Baca, Nick Urso and Mikey Lovato; I doubt his toughness has ever been placed into better light then when he was cut open by Galloway at Rocktagon 30 and decided to proceed in giving Galloway all he could possibly offer on that night.

Galloway was very prepared for a fire fight however, quickly slowing Castillo’s momentum with takedowns and clinch work. The busy workload from Galloway wore Castillo down and in the second round Galloway was able to secure a fight ending rear-naked choke. It was impressive that Galloway could fight away the slickness that the blood caused and had the presence of mind to go for the choke being that blood was visibly leaking onto his own face.

The submission was technical and powerful but most importantly the win got Galloway into winning ways to start 2014.

When you think about fighters fighting below 120-pounds you often think speed…. or technique. Power isn’t traditionally an attribute discussed for the smaller fighters. Well, that theory went out the window on January 25th when top boxing prospect Angelo Leo showed the crowd at Buffalo Thunder Casino that he had dynamite in his left hand.

From a post-fight analysis by Jorge Hernandez:

Leo would feint a right hand to the body that Herrera would bite on. The deceiving move would leave a big opening that Leo would capitalize on with a crushing left uppercut.

The blow sent Herrera falling to the canvass. His head would rest on the bottom rope, his body gasping for air as the referee presented a pointless 10-count. Even more surprising was that Herrera’s corner did not immediately jump into the ring to come to the aid of their fighter.

Clearly, it was the month’s best knockout and easily raised the bar for potential “Knockout of the Year” candidates.

Fighter of the Month – Tim Means

This site has given Tim Means due credit in wake of his TKO stoppage over Artenas Young at Legacy FC 27… but we feel the need to continue. Tim Means was not in the best of places last year after being cut by the UFC following two consecutive losses and one scratched fight stemming from a bizarre weight cutting accident. Upon his release, their were two sides of critics for Means; one of which thought he would be back in no time and the other that doubted his ability to make it back.

After drubbing Pete Spratt in his first appearance from being released, Means would draw Artenas Young in a main event fight that was being hyped as a fight that gets one fighters closer to the big show. Means would dominate the fight from start to finish leaving little doubt as to who the best fighter was that night.

While we are only one month into 2014, Tim Means has been the standout fighter up to this point and his plans for the rest of the 11-months remaining are sure to be met by watchful eyes of the sport’s premier promotions.