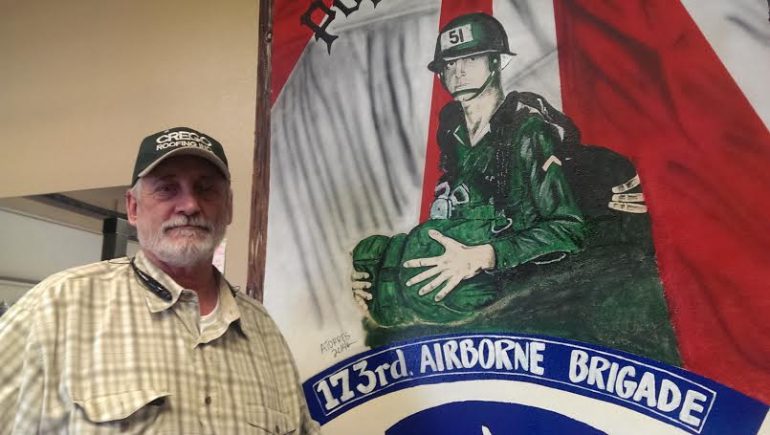 Commonly referred to as “Pops”, he is mostly recognized for being one of Johnny Tapia’s best friends and closest confidants in the former five-time champion’s last few years of life. 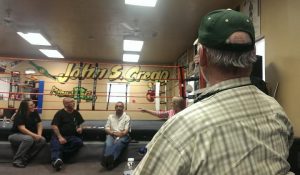 Pops sits with friends and family. They all recount stories from one of Tapia’s last fight camps. (Pops in foreground; gym owner Ray Lopez pictured second from left.)

Over the past decade, Pops has been an instrumental part of supporting athletes that look to turn their life around, primarily in boxing gyms where he donates both time and money to assist those less fortunate.

“He means a lot to the community,” says gym owner Ray Lopez. “He’s always there to lend a hand and it’s about time we showed him our appreciation.”

A former Vietnam Veteran, Pops says his giving and caring nature came from his father, John, who was a Little League baseball coach in Pennsylvania. He was one of the most respected figures in the South-Philadelphia community.

The South Valley boxing gym where he was being honored this weekend is named in the memory of his father.

“If kids in the neighborhood knew he would be coaching Little League that year, everyone would play,” he recalls. “People loved him so much and I learned that by giving people your time and care was the most important thing in life.”

His first encounter with Tapia, Pops says, was a simple gesture of a head nod from a distance, inside a casino lobby.

“Once we locked eyes I just knew he was a stand up guy,” says Pops.

Several photos reminiscing on Tapia’s time with Pops were on hand Saturday afternoon.

Their second and official meeting was a more emotional one. Pops would attend a Tapia autograph signing hosted by another local casino but Pops would not be looking for an autograph. With him he would carry a very significant memento that we would give Tapia.

“I handed him my one year sobriety coin,” recalls Pops, who like the late Albuquerque boxing champ battled his own addiction. “I told him, ‘Johnny I pray for you every night, I want you to have this.'”

Tapia would lean over and have a very emotional embrace with Pops. From that point on the two were inseparable.

“I went through a lot with my addiction and I wanted him to know he can overcome his,” said Pops.

“I never thought he and I would ever cross paths,” said Pops, who owns a longtime running roofing business in Albuquerque’s North Valley. The same part of the city where Tapia’s longtime city rival Danny Romero hails from.

“I was always a Danny-guy I knew him personally and really liked him and his family. My wife always cheered for Johnny,” he recounts.

Pops’ and Tapia’s friendship was a unique one with two men coming from opposite backgrounds but it was their personal battles that brought them together, building one of the most recognizable friendships in New Mexico boxing circles.

Despite losing his friend in May 2012, Pops remains as a key figure and a major contributor to the state’s boxing community and Saturday he was finally officially recognized for it.

Video of Pops Crego and Johnny Tapia at one of the last boxing fights Tapia was a part of:

UFC 170 And What It Meant For New Mexico Trained Fighters