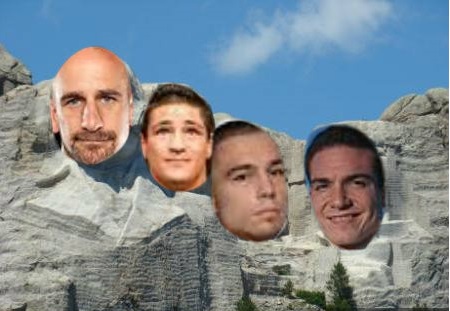 Last week, NBA Superstar Lebron James causes a media frenzy when he chimed in on who he would select to be atop the NBA’s “Mount Rushmore”. For those who aren’t familiar with this historical monument, The Mount Rushmore National Memorial is a sculpture carved into the granite rock of Mount Rushmore near Keystone, South Dakota. Mount Rushmore is famous for the 60-foot sculptures of the heads of four United States presidents: George Washington, Thomas Jefferson, Theodore Roosevelt, and Abraham Lincoln. The massive sculpture pays homage to the pioneers who figuratively (and in ways literally) shaped our Country.

James made news for his selection of the four NBA players he’d etch into stone for a figurative NBA “Mount Rushmore” and several players followed suit with their own opinion as to who should be on it. The task is a tall one; to name just four people who helped transcend the game of basketball over the course of history to the successful brand it is today. After this made news, people from all sets of fandom would start making their own; from football to MMA, fans everywhere started to get in on the fun.

MMA sites big and small started throwing out their own suggestions, ranging from Royce Gracie to Lorenzo Fertitta and Chuck Liddell to Bas Rutten. These discussions got me thinking, who would be atop the granite stone of a Mount Rushmore specifically made for the history of New Mexico MMA?

There are so many right answers to the question being that New Mexico MMA has been blessed with so many influential figures. It feels like a travesty to leave out so many of them and now I see why Lebron James was given so much heat for his selections. It wasn’t that he was wrong but simply that there isn’t enough room on a four-face monument to give everyone their due credit. With that being said, here are my personal selections for New Mexico MMA’s “Mount Rushmore”:

Head Coach at the famous and world-renowned Jackson-Winkeljohn MMA gym is a “no brainer” for the claim t be one of the four pioneers of New Mexico MMA. Before the gym had the Winkeljohn tag alongside it (the inclusion of striking guru Mike Winkeljohn came later), Jackson established the Jackson’s gym after high school concluded in 1992. Developing his own martial art, “Gaidojitsu”, Jackson guided the evolution of the gym into a MMA gym several years later and would go on to become the most recognizable faces within the MMA world.

Greg Jackson was the first high-profile coach in MMA and while there were several legendary coaches before him, Coach Jackson had a “mad scientist” aura about him and there have been legends, icons and world champions alike flying under his tutelage. High profile names like George St. Pierre and Frank Mir have all been linked to Coach Jackson not to mention his early crew of fighters that included Diego Sanchez, Rashad Evans and Keith Jardine. Jackson also has links to such notable fighters as John Dodson, Clay Guida, Cub Swanson, Carlos Condit and current Light-Heavyweight Champion Jon Jones. Needless to say, his resume as a Head Coach speaks volumes.

Greg Jackson’s impact on the area has been tremendous. The brand of the Jackson’s MMA gym put Albuquerque and New Mexico on the MMA map where the area has been considered by many as the “Mecca” of MMA. His name remains as arguably the most well-known name within the coaching ranks and the fighters coming out of the gym fill the ranks of every major MMA promotion in the world and so many other smaller regional circuit promotions. Greg Jackson would definitely be the George Washington of Mount Rushmore.

This is another “no brainer” and joins his coach Greg Jackson as the only two faces that I believe to be unanimous decisions. Diego Sanchez was the first true “Star” coming out of the state in the MMA world and he exploded onto the UFC scene during the inaugural season of the reality TV series “The Ultimate Fighter”. Sanchez was definitely a memorable character, arguably remembered best for his odd timing for yoga sessions and his attempt to harness energy from a lightning storm.

“The Nightmare” entered into the reality TV house with a perfect record of 11-0 and as a disciple of Greg Jackson’s Gaidojitsu fighting style. He would go on to win the reality show, defeating Kenny Florian to become the first ever Ultimate Fighter contract and would solidify himself as one of the marquee prospects in the UFC. His success wouldn’t stop there as he would eventually climb to 17-0 before his first career defeat and would eventually find himself competing for the UFC Lightweight Title.

Sanchez was a polarizing figure for the UFC and for the state of New Mexico. He remains one of the most popular fighters in terms of fan following in the area and regardless of wins or losses, Sanchez will go down in history as the first recognizable face of New Mexico MMA and debatably the most iconic local figure in the state’s history for MMA.

Donald Sanchez arguably is the area’s best regional fighter of all-time and his run as King of the Cage Champion cements that opinion.

The selection for the next two faces were very difficult but one slot on the mountain had to be reserved for someone who carried the King of the Cage banner along with them. King of the Cage is the state’s most storied promotion and possesses the most rich history of any promotion in the Southwest. King of the Cage was home to Diego Sanchez, Carlos Condit, Keith Jardine, Joey Villasenor in the early days, as well as future legendary figures Forrest Griffin, Rampage Jackson and Dan Severn. More recently King of the Cage has featured Daniel Cormier, Mike Kyle and Tim Means.

Donald Sanchez is the longest reigning champion for the promotion coming out of New Mexico and that is why I decided to choose Donald over Angelo Sanchez, Abel Cullum, Frank Baca, Tim Means and the East brothers. Donald Sanchez is a three-time KOTC Champion (once for the Interim title) who fought in 11-title fights during his run. After losing his first title shot against Angelo Sanchez, Donald would capture the Interim Title in August of 2009 and would kick-off his six fight streak as Champion that included a unification bout with nemesis Angelo Sanchez.

Definitely the best local fighter to represent the King of the Cage brand, Donald Sanchez should go down as a true legend of the New Mexico regional circuit. If there was a New Mexico MMA Hall of Fame, I would expect Sanchez to be amongst the first people inducted.

This was my wildcard pick, my left-field selection. There could be so many names in here including the FIT NHB coaches Tom and Arlene Vaughn, Holly Holm, Carlos Condit, Ultimate Fighter Season Two participant Tait Fletcher, even wrestling extraordinaire Lenny Lovato Sr. would be a good selection. However, I came upon Alberto Crane for several reasons and I feel comfortable with the selection.

I didn’t choose Alberto Crane because of his MMA experience, or because he made it to the UFC. I choose him first and foremost for him development of martial arts in Northern New Mexico. Crane was born in Santa Fe and would go on to open the Santa Fe Brazilian Jiu Jitsu Academy which has produced so many polarizing characters associated with the MMA scene. The gym is run now by the accolade-plenty Thomas Pless and has produced such notable fighters as Quinn Mulhern and Angelo Sanchez.

Secondly, Crane may be one of the most accomplished martial artists to ever come from the area. His UFC and MMA career aside, Crane is a 4th Degree Black Belt in Brazilian Jiu Jitsu under the legendary coaching of Carlos Gracie Jr. and Vinicius “Draculino” Magalhaes. Crane as a competitor was amazing as well, tallying up such awards as being a Pan American Silver Medalist ,World’s Bronze Medalist and a Brazilian National Bronze Medalist.

His impact on the Northern scene and his successful involvement in the martial arts world has him down as my last choice for the top four pioneers of New Mexico MMA.

What do you think fight fans? Who would you choose to be atop your very own “Mount Rushmore”? Share your thoughts in the comments or on our social media sites!