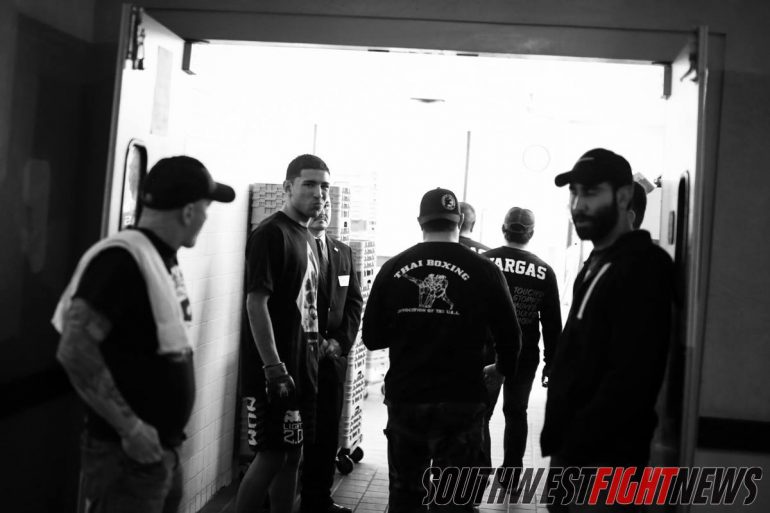 When you have a fight event that featured seventeen bouts of which were all deserving of individual accolades, it is very difficult to choose a select few to be mentioned for post-fight awards. In the case of King of the Cage “Rumble”, it would be very easy to select several of the fights to win each award and we could do an article talking about why each fight should be awarded the respective mention. Instead, we came together as a small panel to come up with individual winners.

We had four members of the team present on Saturday night and we were able to accomplish a great deal including full galleries of photography both inside the cage, within the ballroom and in the backstage for a behind-the-scenes look into the “Rumble” event. Photographers Will Fox and Bryant Muncy teamed up to get over two hundred pictures and blogger Leon Salazar and writer Phillip Lujan made sure to keep viewers outside of the venue informed on all of the action.

Together, that panel of four has come to bring you the King of the Cage “Rumble” Post-Fight Awards.

Fight of the Night – Aaron Perls vs. Dorian Dixon

It was striking versus grappling when Dorian Dixon met Aaron Perls. The first round was full of action and it was our pick for “Fight of the Night”

This was the only pick of the night’s awards that saw every panel member chose a different fight for this mention. That tells me that the event was stacked with very exciting fights. Even match-maker Jon Judy picked a different fight then our panelists. In the end however, this fight won the award for the excitement it provided, the drama and emotion it contained and for the relevance of the outcome.

Both fighters came into the fight making their professional debuts after very successful amateur careers and they dazzled in their respective crafts in the bout. Dixon showcased very effective striking that was highlighted by a knockdown in round one. Dixon had a very crisp jab and solid kicks that attacked from head-to-toe. Perls took advantage of being the larger fighter, winning in the clinch and scoring takedowns.

The first round was a methodical and dominant round for Dixon as he poured on the offense and forced Perls to put forward his best showing of defense. The round was action packed and had the crowd buzzing. In the second round, Perls mounted his comeback by earning an early takedown and craftily securing dominant position mounted atop Dixon. He would end the fight via submission, concluding an emotional fight and picking up his first win as a professional.

Knockout of the Night – Carlo Rodriguez

In the lone unanimous selection of the panel, Judgement MMA’s Carlo Rodriguez definitively stood out to everyone with his knockout victory over Gary Taylor. It was the lone clean knockout of the night and it was definitely the most emphatic strike landed in the entire event. Rodriguez planted his lead foot and marched his opponent down, throwing straight, crisp punches until he found a home for his left hook that stiffened Taylor up and took away his consciousness.

Rodriguez would not need any follow up punches as Taylor would be completely out. Not only was it a statement fight for Rodriguez in his first amateur outing but it was very impressive and rare to see such an inexperienced fighter land so clean and powerful. Definitely a highlight reel finish.

Submission of the Night – Aaron Perls Sinks In An Arm Triangle 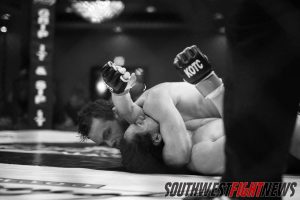 While also be one-half of the “Fight of the Night” Aaron Perls also sunk in the “Submission of the Night” in his comeback performance against Dorian Dixon.

Aaron Perls would leave the Crowne Plaza Hotel with two of our awards as not only did he compete in the event’s “Fight of the Night” but he also pulled off the “Submission of the Night” in a very gutsy come-from-behind performance. After losing the first round definitively, Perls started the second frame with a sense of urgency to get the fight to the ground. Perls fought valiantly for the takedown and once he scored the takedown he wasted little time in improving position.

Perls would transition smoothly into mount where Dixon was not able to find any room to escape or improve his position. Perls would unleash some punches from the dominant position until he found the path for his arm to sneak beneath Dixon’s head setting up the arm-triangle choke. Once the set-up was deep enough, Perls would jump to side control where he’d tighten the choke and await the finish. Dixon appeared to be defending well as he gave the thumbs up to the referee but Perls was too strong and too persistent, and he’d earn the tapout from a very tough opponent.

Performance of the Night – Robert Herrera

In five consecutive outings, Farmington’s Robert Herrera has looked every bit the part of one of the best amateurs fighting in the State of New Mexico. Going 5-0 in an eight month span is no easy task and Herrera has put in the work to be where is he is today. The reigning King of the Cage 135-Pound Amateur Champion defended his title for the first time this past Saturday at the “Rumble” event.

Herrera took on a very game Mark McGlasson from Colorado and it took under two rounds to cement his Champion status and defend his title. Herrera’s shown some very polished wrestling talents in his amateur career and his slams have become a trademark maneuver for the 505 Fight Factory fighter. His top game is not only smothering but dominantly powerful as his base and positional balance is very hard to deal with. If he isn’t controlling and winning rounds, he is punching you into bad positions where he can submit you.

Herrera put in a workman’s performance on Saturday spending much of the fight atop McGlasson where he would show his powerful ground and pound as well as his smooth ability to transition into advantageous positions. He passed guard, he went knee-on-belly and made his way to the mount before taking McGlasson’s back and sinking in a rear-naked choke. It was the most thoroughly dominant performance of the evening. 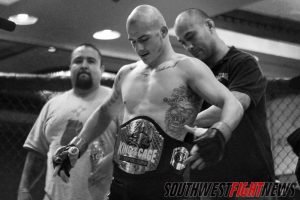 That’s five fights in a row for Champion Robert Herrera, he dominated in his title fight and delivered a very thorough performance on Saturday night.

I’d imagine that the evening didn’t start off the way Mike Taff expected when the cage door shut and bell rang but regardless Taff adapted and flourished. After Mendoza took round one in a wild round that saw a lot of action. Taff landed one of the most devastating strikes of the night to start round two; whipping a nasty leg kick to the thigh area of Mendoza, Taff nearly dropped Mendoza to the mat. The kick did buckle Mendoza and he just wasn’t the same after. A failed takedown from Mendoza would follow and when the fighters would disengage from the clinch work Taff would uncork a power right hand sending Mendoza to the mat where he’d jump mount and get the TKO finish after a barrage of punches.

An emotional win for Taff as the crowd undoubtedly thought Mendoza would finish his work in the second round after dominating the first. The crowd roared for Taff’s comeback and became the night’s most celebrated out-of-state fighter.

A definite “no-brainer” for this award, Judgement MMA went 3-0 for the evening with finishes by knockout, technical knockout and by a Judge’s unanimous decision where each round was won by the Rio Rancho fighter. The gym is definitely becoming not only one of the busier gyms when it comes to fighters fighting on a consistent basis but also one of the most successful. In their last three King of the Cage outings for example, Judgement MMA has gone 7-1 in eight bouts featuring their fighters.

Coaches and Cornermen Scott Marlow, Adrian Cruz, Rich Chavez and Shannon Curlee marched out three fighters on Saturday night and each impressed in their own ways. All three were well prepared, well-polished and took the skillset earned from within the confines of their home gym to bring back victories for the Judgement MMA team. It was another very successful evening for Head Coach Scott Marlowe and the entire Rio Rancho team who will take home two individual awards and could have very easily could have mentioned in just about every category in this post.

Moment of the Night – Brianna Padilla and Melody Nanez Throw Down

The crowd was very loud inside the Crowne Plaza Casino and while the loudest pop definitely goes to Main Event winner John Rozema; however, the crowd was really buzzing for the WMMA fight between Brianna Padilla and Melody Nanez. There was a lot of exciting moments in this fight including very explosive exchanges where both women dropped their defenses a little in favor of punching one another in the face in close range. Neither fighter wanted to give way to the other and that showed brightly when the bell rang for the end of round one, both women continued to throw punches at the other. The crowd sound was so loud that it wouldn’t surprise me if they just didn’t know and the adrenaline had already kicked in.

Padilla would literally flip Nanez with a leg kick that got people cheering and Nanez would push the action the fence where she’d land flush on Padilla’s chin that drew her own crowd praise. The fight went the distance and didn’t seem to have dull moments as both women were looking for action all 9-minutes long.