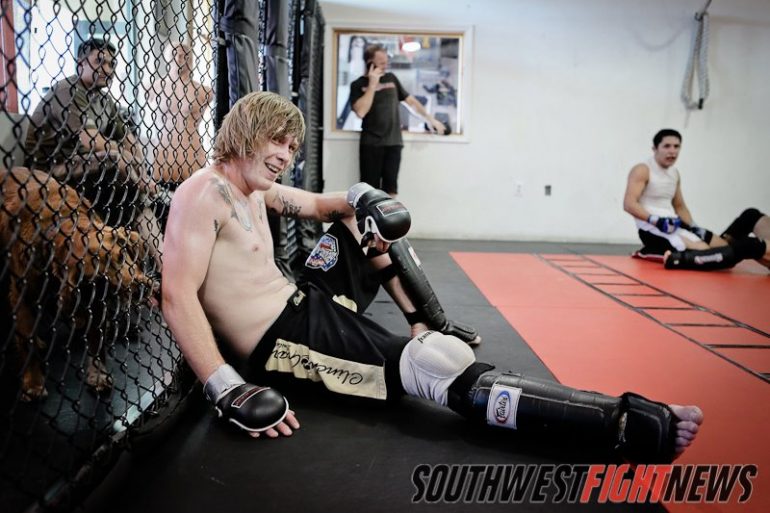 Putting together a memorable 2013 with eight victories in 12-months, Kevin Croom was 2013's "Fighter of the Year". Now slated for action tonight at Titan FC in Kansas City, Croom looks to take his win streak to nine and louden that knock at the door of the UFC.

It has been nearly three-months since Kevin Croom last fought and that will be the longest lay-off for the Albuquerque trained fighter since his monumental rise up the ranks following an eight fight win streak. 2013’s “Fighter of the Year” for SWFight returns to action tonight at Titan FC looking for his ninth consecutive victory.

In one of the most inspiring stories in New Mexico MMA, Kevin Croom spent 13-months from November of 2012 to December of 2013 blazing his way to mixed martial arts prominence by winning eight straight fights. While winning eight in a row isn’t record-breaking, it doesn’t happen very often and definitely not in the time-frame Croom accomplished it. In the initial years of MMA, it wasn’t uncommon for fighters to fight multiple times in a night or every weekend, but with the influx of thousands of fighters and the decreasing numbers of MMA promotions, finding eight fights in 13-months can be extremely difficult.

Before the eight fight streak, Croom had a record of 5-4 and was staring down two straight losses and had lost three of his last four overall. Needless to say, Croom was definitely not on the pathway to the big show or any big fights. Four submissions, three TKO’s and one decision victory later and Croom is nearing a remarkable nine-fight run. He will fight tonight at Titan FC 27 inside the Memorial Hall in Kansas City, Kansas.

Kevin Croom (13-4) was our Southwest Fight News “Fighter of the Year” for 2013 and with a win against opponent Bryan Goldsby (17-15), he will immediately propel himself for another career changing year. Goldsby is definitely a formidable opponent with over 30-fights to his name and standing across the cage against such notable opponents as Zach Makovsky, Ed West, Jessie Riggleman and Will Campuzano. He went to decisions with three of those fighters and holds a marquee victory over Jeff Curran within the Bellator MMA promotion.

Croom’s success is definitely sweeping the rest of the country; the prominent betting site Tapology has their leaderboard for fan voting published and Croom is a resounding 94% to 6% favorite amongst the sites community.

A win tonight will line-up things well for Croom who already has his next bout lined up, a MFC Title fight on May 9th against another fighter knocking on the door of the UFC. Croom is set to fight Anthony Birchak for the promotion’s title in a match-up that is very likely to send the winner to the big show.

For more information on tonight’s event, check out the Titan FC website (click here) and join us in sending our best wishes to Kevin Croom and his team who are all out in Kansas City with the “Hard-Hitting Hillbilly”!

Inside The Mind Of Westside Power Gym’s Carlos Casados