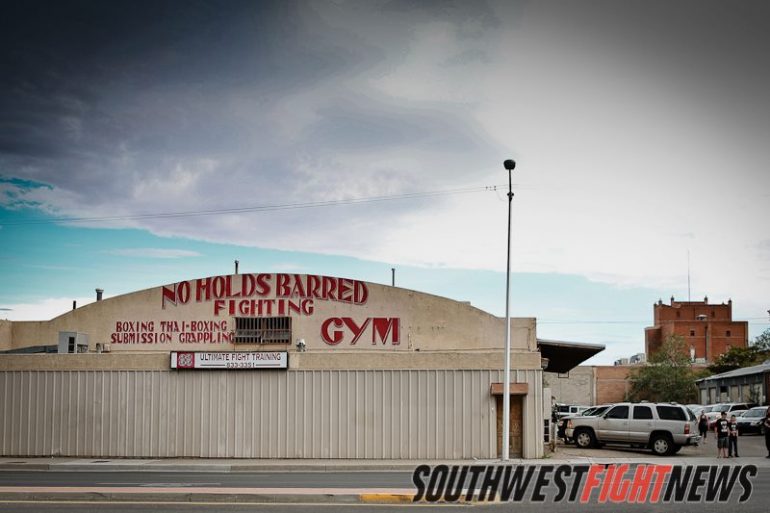 This Saturday night, February 8th inside the Crowne Plaza Hotel in Albuquerque, New Mexico fight fans will get their first glimpse of the King of the Cage promotion in 2014. In the promotion’s first show of the year they will compile a healthy dosage of over ten gyms to participate in their “Rumble” event. Traditionally, fight cards have several fighters from the same gym competing and in this instance, King of the Cage has spread gym participation evenly with three gyms receiving four fighter slots, another gym three and several others with two fighter slots.

With the inclusion of so many gyms, we found it fulfilling to catch up with some of these smaller gyms to introduce them to our fight fans in the lead up to Saturday night’s event.

The head coach of the Grants MMA gym is Joey “J5” Lujan who was a successful regional fighter who was a regular to the King of the Cage circuit years ago. After suffering a severe back injury, Lujan refocused his training into a coaching role as he started the fight team in Grants about four years ago. Lujan specializes in Jiu Jitsu where he is two stripe Purple Belt under Skeet Lassiter. Lassiter has how own style of Jiu Jitsu which heavily focuses on leverage called Lassiter Jiu Jitsu (LJJ) and he is a four stripe Brown Belt under the Gracie system. Joey Lujan trained in No-Gi for eight years prior to training in the Gi.

The head coach of the Belen MMA gym is also their most prolific fighter, Gene Perez who is a professional of nearly ten MMA bouts. Having fought a “Who’s Who” of New Mexico’s finest martial artists, Perez brings a wealth of experience to his students. The 3 1/2-year old  gym started in a garage and has grown to become the prominent gym in that area with a fight team consisting of nearly 15-competitors. The gym has many unique aspects including a program specifically for the Perez Fighting Systems ring girls to train and the Little Warriors youth program that offers free classes to kids between the ages of 5 and 17-years of age.

As the lead coach, Gene Perez’s regiment definitely has emphasis in striking as that is Gene’s strongest point in active competition. Gene also has his brother Derek Perez on staff who focuses more on grappling and the team has also been working with Abe Henson.

Quickly becoming one of the state’s most active gyms, Judgement MMA is led by Head Coach Scott Marlowe who is a striking savant with decades worth of experience in the combat sports world. His students have a vast array of strikes in their arsenal and his style of teaching definitely resonates from the old-school, traditional style of teaching where hard-work is required and toughness is necessary.

Coach Scott Marlowe is aided by his wife Robin Marlowe who serves as a conditioning coach in charge of whipping their students into shape. The Judgement MMA fight team has always possessed impressive cardio and are able to push a very active pace in their bouts. Add in Rich Chavez to the team as the grappling coach and you have a solid set of coaches inside the Rio Rancho gym. Chavez was selected to be part of the inaugural Olympic Team for the United States in Jiu Jitsu a few years ago.

The most well-known gym of the bunch, downtown Albuquerque’s FIT NHB is led by the tandem of Tom and Arlene Vaughn who train their fighters in a gym that has a very old-school vibe with the motto “Whatever It Takes” painted largely on the gym’s wall. The fighters who represent the gym often have very crisp and technical striking talents that has ties to the Thai Boxing discipline. The clinch mixed in with elbows and knees are some of the gyms marquee maneuvers and it seems that more often than not, fighters hailing from FIT NHB will be involved in very competitive fights where their toughness carries them to victory.

Also part of the coaching crew, Jon Judy encompasses the wrestling and grappling aspect of training. Several fighters have strengths in the takedown department and show efficiency in the top-side grappling aspect of MMA. The coaches have built a world-class environment that has produces fighters who have went to the UFC, Bellator and have become King of the Cage Champions.

The Colorado Springs gym has an all-star cast of coaches who run their successful MMA program including Gabe Beauperthuy, Patrick Cross, Marc Fiore and Iako Kalili. Included in that staff is a Brazilian Jiu Jitsu Black Belt from the Alliance MMA gym, an Olympic caliber wrestler, a Khru level Muay Thai instructor and a coach who has years of experiences with UFC-talent. Needless to say, the gym is stacked from wall to wall with guidance for fighters of any skill level from just starting out to fighters ready to break out of regional MMA. The quality of coaches in staff only adds as a compliment to a gym with very modern equipment and resourcefulness.

The Santa Fe Brazilian Jiu  Jitsu Academy was founded in 2002 by UFC veteran and accomplished Jiu Jitsu practitioner Alberto Crane who is a 4th degree Black Belt. The Academy moved on from the guidance of Crane to current Head Coach Thomas Pless who himself is an accomplished martial artist. Pless is a  1st degree Black Belt under Alberto Crane and Vinicius Draculino. Pless is also a black belt or equivalent rank in Tae Kwon Do, Hapkido, Muay Thai and Pekiti Tersi Kali not to mention a former MMA fighter.

Coaches who aid Pless in the direction of the gym are Jesse Jacquez who is a Jiu Jitsu Black Belt under Pless and Aaron Perls who will also be fighting on the card. Perls is currently Khun Kru and a Purple Belt in Jiu Jitsu. The gym is predominantly a Jiu Jitsu academy but has produces quality MMA fighters like Quinn Mulhern and Angelo Sanchez.

The Colorado gym is led by Co-Head Coaches and both are very tough fighters first and foremost. Coach Rocky Johnson is a fight veteran of over 40-fights and a successful fixture of the Colorado fight scene. Johnson was an All-American Greco-Roman wrestler and has elite skills in Judo, Hapkido, Nin-jutsu and Tae kwon Do while also being a 5-stripe Brown Belt in Jiu-Jitsu. I currently train and am Co-Head coach at Child’s Play MMA in Parker, Colorado. I also am an Assistant Wrestling Coach at Chaparral High School and was honored to be chosen as one of the coaches for the Colorado National Wrestling team this past season. Co-Head Coach Vern Earwood is a 2-time state boxing golden glove champion and USMC boxing and kickboxing tournament champion. Between the two head coaches they have impressive accolades in both striking and grappling talents.