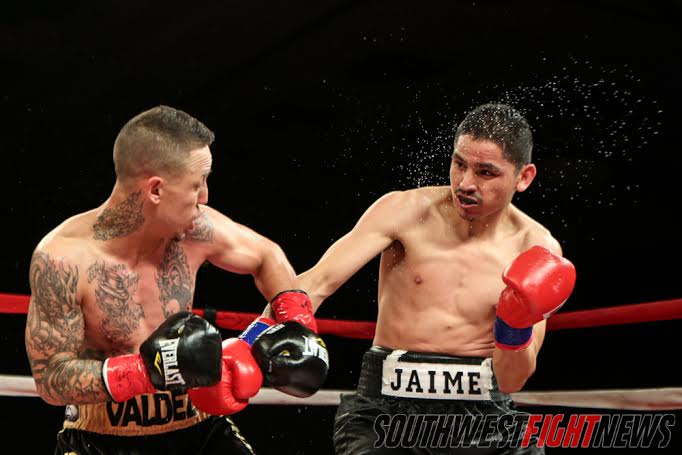 The main event saw a twist when Tony Valdez would take a road he has never cruised in to victory and the co-main event saw his teammate Brandon Holmes maintain his perfect win and knockout record.

Valdez Puts the Warrior Aside

It was as though Jaime Gutierrez was welcoming the jeers of the pro-Tony Valdez crowd in the men’s main event. The only problem is that Valdez would not adhere to the luring Gutierrez. 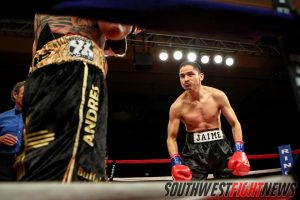 seeing from “The Warrior”. Gutierrez would attempt to sucker Valdez into trading shots by slamming his gloves together and making faces at him.

Each men displayed very good footwork early on to avoid danger when the other would attempt to attack from a distance. Valdez single shots would not give Gutierrez much opportunity to really counter.

Lead rights would be a key for the orthodox Valdez against his southpaw opponent.

In the third, it would be Valdez that countered Gutierrez lead jabs. A five-punch combination from Valdez would bring his fans back into the fight as they eagerly waited to see some action.

As the round came to an end Gutierrez would miss a chance to land a huge right counter against a defenseless Valdez who was caught with his hands down. Valdez would respond and would be met by an equal volume of punches form Gutierrez as the bell rang. The two would continue to throw well after the round ended sending the crow into a frenzy. 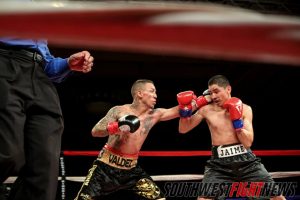 A very dangerous moment was a avoided in the fourth when Valdez clearly tripped over Gutierrez’ feet. A very unsportsmanlike left hook thrown by Gutierrez at his downed opponent would only thankfully graze his chin. This appeared to anger Valdez who immediately composed himself and continued to fight the tranquil pace he had been the entire fight.

Valdez would go on to control the fifth and Gutierrez would move on to take the sixth, in the only round SWFight.com gave him the whole fight.

Gutierrez would play Valdez’ waiting game and it would throw off his timing easily giving Valdez a unanimous decision.

You would have thought these men would have come out swinging if you considered the hotheadsthey both were at the weigh-in. The fight would begin quite the opposite with both being very technical.

Muñoz would be the aggressor early on throwing several combinations but missing due to Holmes fluid movements to avoid the advances. 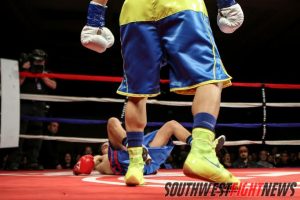 respond. A second left hook, this time in form of a counter would put him down.

Holmes would not give Muñoz the slightest time to recover immediately pouncing on his opponent landing a six-punch combination capitalized by a right cross that would once again drop his wounded adversary this time forcing the referee to call of the contest at the 02:25 mark of the first round. 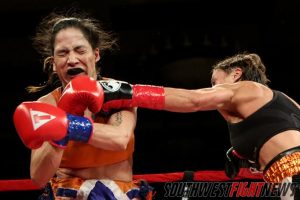 After 6 years away from the ring, New Mexico boxing fans saw the return of Lovato. The far more talented Lovato struggled early on to put combinations together against DJ Morrison.
Muscle memory seemed to take a hold Lovato as legs seemed to be ahead of her mind. Her southpaw stance against her opponent’s traditional led to several butting of heads and countless holds – (most of them initiated by Morrison).

Lovato’s success would come from the exterior as she appeared to land right crosses almost at will but would seldom throw them. Her pressure became more rhythmic toward the end of the third when she would hurt Morrison with consecutive over the top hooks followed by shots to the body. 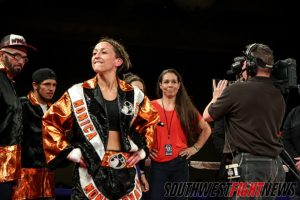 Despite sitting between the third and fourth round looking like a wounded animal, Morrison would come out swinging to start the fourth. This would ultimately be her downfall as Lovato would use that aggression to set up power-combinations sending Morrison staggering to the ropes turning her back to the action not once but twice forcing the referee to stop the action.

In the post-fight in ring interview with the online streaming crew Lovato was told that she had a challenger waiting in the wing wanting to fight her next.

Jackson’s Mixed Martial Arts fighter Nohime Dennisson was presented to Lovato and the crowd. Dennisson expressed praise of Lovato who would respond that she did not know Dennisson but would welcome the challenge.

Gloria Gets By Montoya 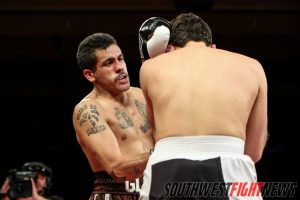 A very conservative Montoya never really developed a rhythm or seemed to pose any danger to Gloria.

Both men were successful with punches in the clinch but when it came to that dirty boxing it was Gloria that easily out-strengthen Montoya with hooks.

Montoya appeared reluctant to throw from a distance, the hesitancy may have been trying to figure out Gloria’s unique philly-shell defense where he would present the lead elbow more prominently than most are accustomed to seeing.

The way Angelo Leo (4-0, 1KO) easily put away Michael Herrera in their bantamweight would make you think he has a true power puncher.

Leo would feint a right hand to the body that Herrera would bite on. The deceiving move would leave 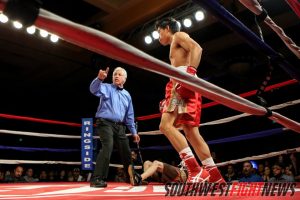 a big opening that Leo would capitalize on with a crushing left uppercut.

The blow sent Herrera falling to the canvass. His head would rest on the bottom rope, his body gasping for air as the referee presented a pointless 10-count. Even more surprising was that Herrera’s corner did not immediately jump into the ring to come to the aid of their fighter.

Do not forget that Leo is only 19-years-old, he posses very good technical skill and if power becomes part of his repertoire he is going to be scary for year to come.

Matthew Baca’s first trip to welterweight would be a tough one. It took all six rounds for Baca and Michael Coca Gallegos to decide a winner in the opening bout of the evening. 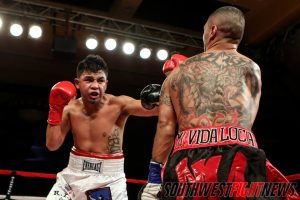 Most of the fight took place on the inside, a Gallegos type of fight but Baca remained aggressive through entire fight.

Early on, Gallegos would do a good job of landing short power shots and pivoting to better his position on most his punches. As the fight progressed that technical footwork would go away along with his stamina.

Baca would implement body attacks  heeded his corners pleads for body shots and over the top rights.

The men would take turns having the other against the ropes each being effective when they would have the upper-hand.

As Baca wore down in the final round Gallegos did a better job of boxing and countering a visibly slower Baca. As the bell rang to end the contest Gallegos would land flush right hook that would floor Baca. The punch would be ruled after the bell and there was not a referee ten-count.

When the decision was read Gallegos was announced the winner via SD. This threw ringside observers into a confusing and cheerful state, for Baca and Gallegos fans respectively. As the fighters left the ring, commissioners were sure to point out to the media that it was in fact Baca that won by split decision and not Gallegos.