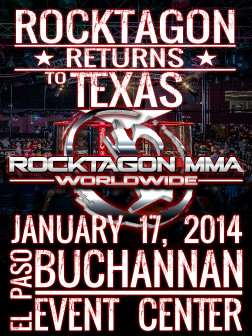 It is a busy week of fights for New Mexico and tonight is another night full of action featuring our local, hard-working athletes. Rocktagon 30 will take place in El Paso, Texas tonight and will be the third event in as many nights to feature some of New Mexico’s MMA talents. On Wednesday night, the UFC’s Fight Night featured Isaac Vallie-Flagg and last night, Triple-A-MMA held a show in Fort Worth, Texas featuring three of New Mexico’s up-and-coming fighters.

Now tonight, three fighters from FIT NHB are expected to be in action in El Paso as Tim Sosa, Turrell Galloway and Oliver Parker will all be in MMA competition inside the Buchanan Event Center.

Most notable of the bunch, Tim “Timbo Slice” Sosa will look to pick up his first career professional win after a very successful amateur run that saw Sosa accumulate more than 10-amateur victories. Sosa will take on Alan Lerma who stepped into this fight as a late replacement for Joe Torrez who has garnered national recognition for a home invasion in which Torres killed one of the four intruders breaking into his home.

Galloway and Parker are experienced professionals who started their careers prior to 2010 and have now look to get back on the winning track as both fighters come into the night losing their last fight.

Judgement MMA’s Amada Lovato was expected to compete before her opponent came in 8.5-pounds heavy at weigh-ins. Jessica Kennett would weigh in at 123.5 for her 115-pound bout and the Texas Athletic Commission shut down the possibility of the fight continuing as it is state rules to prevent that type of weight discrepancy.

Another notable name fight fans might recognize is Jeremiah “Paco” Castillo. While he isn’t a local, Castillo has some intense connection to the New Mexico area. Castillo fought Santa Fe’s Josh Montoya in just his second pro bout and would go on to fight Mikey Lovato, Erik “Goyito” Perez, Frank Baca, Gerald Lovato and Nick Urso during his 20+ fight career.

Quick Results From Rocktagon 30 and our post-fight thoughts directly below: