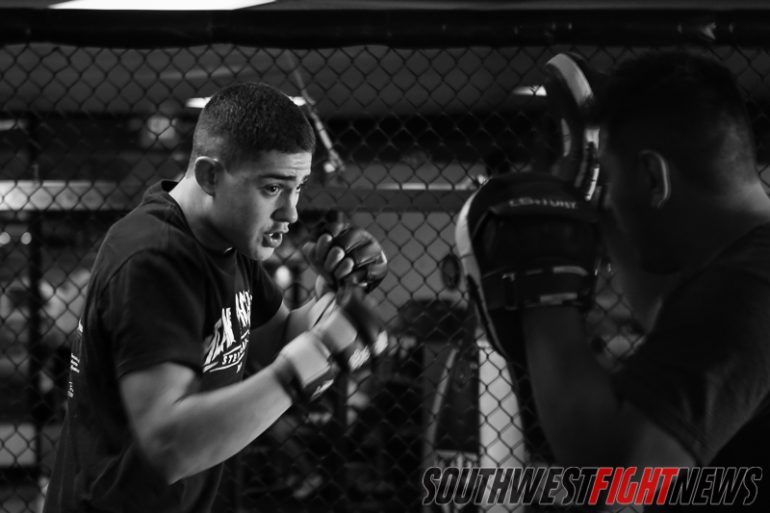 It was a very busy weekend for New Mexico combat sports and interestingly enough, none of the action from this past weekend was within state lines. With the high volume of mixed martial artists residing in the many New Mexico gyms, it isn’t rare to have several fighters from several gyms fighting in the same weekend. The rarity of this instance was that from Wednesday to Saturday, there was a local in action every single night.

In order to bring you up to date on the past week’s busy schedule, here is our Monday Morning Re-cap:

Jackson-Winkeljohn product Isaac Vallie-Flagg entered into Wednesday night’s festivities riding a five-fight win streak and winning eleven of twelve overall. His opponent, Elias Silverio was an undefeated prospect out of Brazil who had one UFC fight under his belt.

Unfortunately for our local fighter, Silverio would prove to be too much for Vallie-Flagg winning every round and capturing the unanimous decision victory.

The local promotion ventured outside of New Mexico for the second time, making their debut appearance in Texas. They took with them several of our talented locals and despite two fights being scratched late, three New Mexicans still took to the cage. For all of the results, check out our post-fight article.

Two of the three locals brought home victories, arguably the most impressive was the young Stephen Cervantes who made his pro debut and dominated against a larger opponent with powerhouse wrestling and a smothering top game. The Lovato Total Fitness fighter made a statement in his debut as a professional.

Lutrell MMA’s Steve Garcia also made a statement, winning in emphatic fashion in his co-main event bout. While his rendition of the “Showtime Kick” didn’t land, his barrage of knees, kicks and punches all found homes as he would earn a TKO victory.

In defeat, Lynae Lovato still impressed; winning the first frame in dominant fashion which easily could have been scored a 10-8 round. She would get caught in a guillotine early in the second and would suffer the submission defeat.

Another late scratch took away a bit from this event for the local community as Amanda Lovato’s opponent would come in 8.5 pounds heavy for their WMMA feature bout. It would be the beginning of a list of unfortunate scenarios that plagued the locals who headed out to El Paso.

For more in-depth information on Rocktagon 30, check out our post-fight article here.

Three fighters from FIT NHB competed on the show and while the official results will say that two of those fighters lost, that wouldn’t tell the whole story.

Turell Galloway won emphatically as his put on a methodical performance dominating Paco Castillo in one of the bloodiest fights you’ll ever see. Oliver Parker came in on short notice to take on a very hyped opponent and dominated his fight for the better of a round and a half before eating a huge punch that spelled disaster.

Tim Sosa took a loss against Las Cruces fighter Alan Lerma in what will go down as a very controversial fight.  Fans watching via online stream would notice that the fighters would be announced wrong during introductions and then to add to the confusion, each round would end two minutes early at the three-minute mark. In the end, the winner would be announced as Alan Lerma winning two rounds to one when it is hard to argue that Lerma would any other round other than the third frame. An interesting and definitely controversial fight.

Bushido MMA trained Alida Gray was arguably one of the hottest, most buzzing names in WMMA after a knockout video went viral in the past couple of months. She was plugged into the biggest fight of her career this past Saturday as she was set up to fight Jessica Aguilar for the inaugural Strawweight Title.

Aguilar is considered to be the #1 ranked fighter in her weight class and she showed exactly why on Saturday night. She negated any chance for Gray to unleash some of her much-talked about power striking and immediately worked to take the fight to the ground. When she was able to get the takedown, Aguilar quickly locked up and arm-triangle choke and captured the promotions World Title.

Fighting all the way across the country on the east coast, Jodie Esquibel took on Eileen Olszewski for the vacant Universal Boxing Federation Title. Esquibel would come up short losing on the scorecards after six rounds. The scorecards read 59-55, 59-55 and 58-56.

While the decision was unanimous, there was considerable buzz on social media suggesting the bout was much closer than suggested and that Esquibel arguably should have been declared the decision winner.

The FIT NHB fight team was busy this weekend! After three fighters took their talents to El Paso just one day prior, another teammate was in action in Colorado. Isaiah Reyes took on Prentice Ingram in the co-main event of “Annihilation 49”.

Unfortunately, despite a valiant effort from Reyes, Ingram would prove to be just a little too much as he would capture a decision victory over our local fighter.