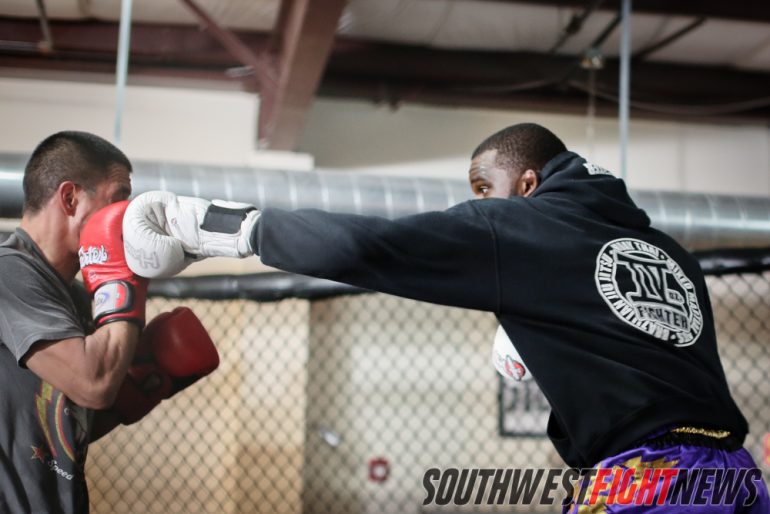 Artenas Young was never able to find this range in the bout with Tim Means. Unfortunately for Young, that lack of range cost him in the only significant exchange.

In less than two weeks, one Albuquerque trained fighter will have the daunting task of stopping another Albuquerque trained fighter from his intentions to re-enter the ranks of the Ultimate Fighting Championship’s roster. On paper he is the underdog and he will be locked inside the cage with a fighter notorious for his aggressive style and impressive finishing rate. Arguably his biggest fight to date, Artenas Young (10-6) will look to weather the storm that is Tim Means (19-5-1).

The highly anticipated Welterweight battle will take place on January 31st inside the Arena Theater in Houston, Texas. A veteran of the Legacy FC promotion, Young will be fighting for the seventh time under the promotional banner. With a record of 4-2 for the Texas based promotion, the event in Houston will be a hometown appearance for Young.

With the odds seemingly stacked-up against him, we thought it would be fun for fight fans to consider a few thoughts that could turn into a few things to watch for when they watch the January 31st main event. Here are our “Keys to Victory” for Artenas Young for his upcoming battle against Tim Means.

Young will not give up any considerable length difference as both fighters are both around the same height; however, one of Tim Means most advantageous characteristics is that he fights long and his mastery of the Thai boxing style of striking creates huge mismatches when he exchanges with his opponents. 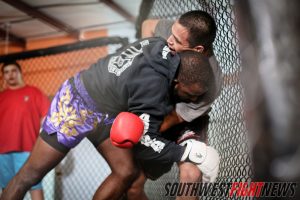 Cage control stifles the striking game, Artenas Young has a tall task ahead in stopping the punches, kicks, knees and elbows of “The Dirty Bird”.

It is important as a counter striker to stay just outside the range of punches or contrastingly, deep into the range where an opponent cannot land significant power punches and one of those two areas is exactly where Young needs to be. Young does possess polished striking skills but when dealing with such an aggressive and savvy volume striker like Means, you ideally would like to take away any time for him to get into a rhythm. Means throws knees, elbows and kicks to compliment his punches and depending on where Young feels most comfortable, he needs to establish his own rhythm wherever he feels his range can be most effective. He needs to be just outside of range Means can punch him or just inside the area where Means cannot land significant power shots.

Young will be well prepared for the bout as he trains alongside Coach Chris Luttrell at Lutrell’s MMA gym in Albuquerque as well as putting in time inside the Jackson-Winkeljohn gym. The versatility of his training undoubtedly will prepare him to be fluid when striking with the elite talents of Tim Means.

If there is a way to effectively stifle the offense of a high volume striker it is to take away the ability to strike by taking the fight to the mat. It is safe to say that the two losses in the UFC are indicative of how to stop the striking attack of Means; the wrestling oriented game plans of Danny Castillo and Jorge Masvidal earned them unanimous decision victories. Means has shown that his aggressive style has left him susceptible for takedowns and with a strong top game, it is favorable for opponents to hold position avoiding his dangerous stand-up game.

If Young learned anything from his bout with Eric Davilla, he will understand that in the eyes of MMA judges takedowns and pushing the pace with offensive grappling score points. If Young has improved his offensive wrestling, the changing of levels will compliment his striking even more as a diverse offensive attack may lead to hesitation from Means. Should Young put Means on his heels, an offensive output standing will see great benefit from simply the danger Means would feel of being taken down. 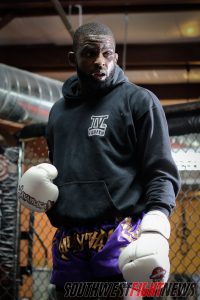 Young finds himself in the biggest fight of his career on January 31st against Means, will he have the necessary tools to pull off the win?

Part of the dynamic abilities of Means is his ability to throw anything he wants with confidence and takedowns could force Means to be more robotic in his delivery. Should Young hit a takedown or even land damaging strikes in the clinch, he will be able to use feints and level changes to open up his arsenal of strikes. While Young is touted as a talented counter striker, the inclusion of a balanced aggressive onslaught could make a huge difference in the fight.

Footwork And Weathering The Storm

Everything in the combat sports arena is built simply around mobility. Moving your head to avoid punches, delivering strikes fluidly and being able to shuffle yourself around the cage makes your offense and defense effective.  That movement, and in this case footwork will be emphasized by both fighters once the cage door closes. Means has a knack for cutting the necessary angles in order to find his openings and Young will now have to match that in order to find his own opportunity.

The Legendary Boxer, Muhammad Ali made a career out of out-maneuvering people inside the boxing ring and Young will need to follow that example on January 31st. Means will definitely come forward with his striking attacks and when that time comes Young will have to move and weather any offense that comes towards him.

By finding his own angles, Young will find openings for his patented counter strikes as well as opportunity for takedowns. With eight points of the two limbs of Means coming at you, this task is easier said than done, however, Young will find it effective to emphasize mobility as one of his best assets in the bout.

That’s it for now fight fans! Make sure to follow SWFight for more unique content and coverage of Legacy 27: Means vs. Young and don’t forget to tune in to AXS.TV on January 31st to catch the welterweight battle. Before the next article, we want to hear your opinions! Are the keys to victory we outlined similar to what you would consider when breaking down the bout, or do you think there is more to match-up?