King Of The Cage “Rumble” Set For February 8th In Albuquerque 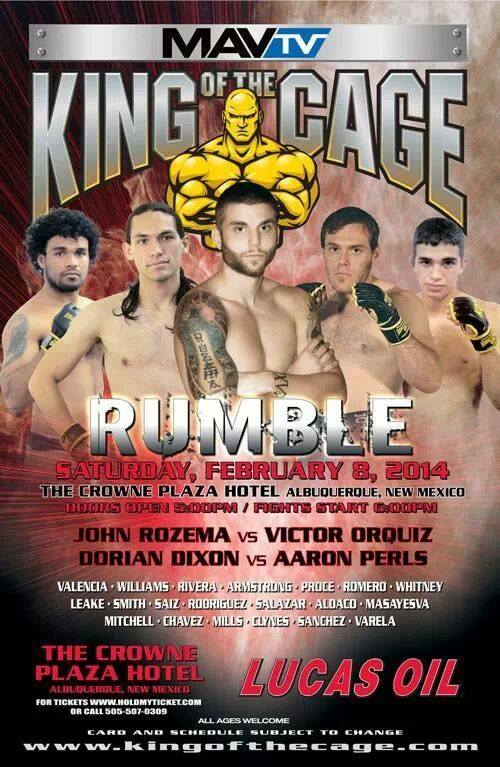 The first King of the Cage event in New Mexico for 2014 should have been named “Debut” as the theme atop the fight card is that several of the area’s most talented amateurs will make the jump to the professional level. The professional and amateur MMA event is scheduled to be held inside the Crowne Plaza Hotel in Albuquerque on Saturday, February 8th. Headlining the fight card are amateurs turned professionals John Rozema, Aaron Perls, Dorian Dixon and Victor Orquiz.

In fact, those four fighters will square off with one another as the fight card is promoting the match-ups between Judgement MMA’s John Rozema and Las Cruces standout Victor Orquiz, and Rosales Kickboxing’s Dorian Dixon and Santa Fe Brazilian Jiu Jitsu’s Aaron Perls. Both match-ups are compelling in that not only are they locals taking on locals but they are all turning pro against fellow amateurs making their professional debuts.

Also featured on the fight card’s event poster are amateurs Charlie Williams and Jerome Rivera; both of which would be highly anticipated participants if they are scheduled for February 8th. Rivera was this past years “Amateur Fighter of the Year” and his fifth amateur bout may very well be his last should he continue to find the success he has found thus far.

As customary for the King of the Cage promotion, a fight card will not be released until the date of the event draws more near. Stay tuned to SWFight.com for more event coverage, bout breakdowns and analysis.