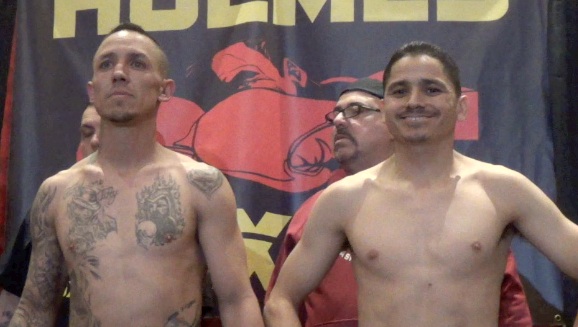 Tonight Holmes Boxing and Orthrus Promotions join forces to bring the public “Return of the Warrior” at the Buffalo Thunder Resort and Casino just outside of Santa Fe, New Mexico.

The card is stacked with eight fights, a rarity in central and northern New Mexico where we are accustomed to seeing four to six fights on the card; Eight-fight cards are usually seen in southern New Mexico and El Paso. Fans should prepare for a long night but some of the matches do have the potential for some excitement, especially if you base that off yesterday’s face-off.

To further help boxing fans who will be at the fights or will be streaming online tonight we’ve put together a list of the top five things to be aware of before heading out or tuning in:

1. Return of the Warrior

It’ll be interesting to see where Tony Valdez’ head is in this fight. If his staredown with Jaime Gutierrez yesterday is any indication, he is 100% focused on tonight’s fight.

Valdez, basically had the WBC USNBC title in the bag in his last outing. Always a crowd pleasing fighter, in the final round of that match Valdez would put his foot on the gas and it cost him.

In Gutierrez, he will see a tough Mexican native that rarely disappoints win or lose in his fights. Gutierrez is in search of his first victory since upsetting Leonardo Sanchez in 2012. Be prepared for either a quick fun fight or a great long one.

Looks, brains, bilingual and a professional style that he carried all through amateurs, this kid has star potential written all over him. After a short but successful amateur career Brian Mendoza will be making his professional debut tonight.

The 19-year-old, UNM Nutrition major, hails from Rio Rancho, New Mexico, and trains at the Atrisco Boxing gym in Albuquerque’s South Valley alongside 2013 SWFight.com Boxer of the Year Fidel Maldonado Jr.. Mendoza won the New Mexico State Golden Gloves title twice and in 2013 won the Colorado/New Mexico regional championship where he then advanced to the quarterfinals at Nationals.

3. The Return of Monica Lovato

After an almost six month hiatus from the sport of boxing to pursue a mixed martial arts career (where she sported a 5-3 record), Monica Lovato (12-1, 4KOs), returns to the pugilist sport where she previously captured the NAFB Super Flyweight, and IBA Bantamweight titles.

Before her departure from boxing, Lovato, was on an 11 fight win streak. It will be interesting to see the fluidity in Lovato’s movements after such a long time away from the sport. Let’s see if she can pick up where she left off. She will be taking last second replacement DJ Morrison (3-20, 2KOs), in a fight that Lovato should win easily.

4. Baca Back at Buffalo

Matthew Baca, looks to bounce back from an unfavorable draw his last time out at the Buffalo Thunder against Antonio Martinez last September.

He’ll be taking on the always tough Michael Coca Gallegos. Let us not forget about the hell Gallegos gave Cristian Cabral in 2012.

Baca and Gallegos’ bout will be at welterweight, a class that Gallegos is accustomed to fighting in; Baca will see the division for the first time in his pro career. A weight-class he and his camp are not sure how long he will be in. Tonight will give us some insight on whether or not 147 is the weight for Baca.

5. ‘Return of the Warrior’ on the worldwide web

Tonight’s “Return of the Warrior” boxing card will be streamed on OrthrusPromos.com for $10 to those outside of the Santa Fe and Española area at least. The live on-air production of the fight is a result of the co-promotion linking Holmes Boxing, who is holding their third event in a year, and Orthurs Promotions, usually an MMA promoting company in New Mexico, Texas and the Midwest, now investing in boxing.

It will be interesting to see how many Albuquerque fans make the trip to Buffalo Thunder for the fights. The last two Holmes Boxing events have sold out.