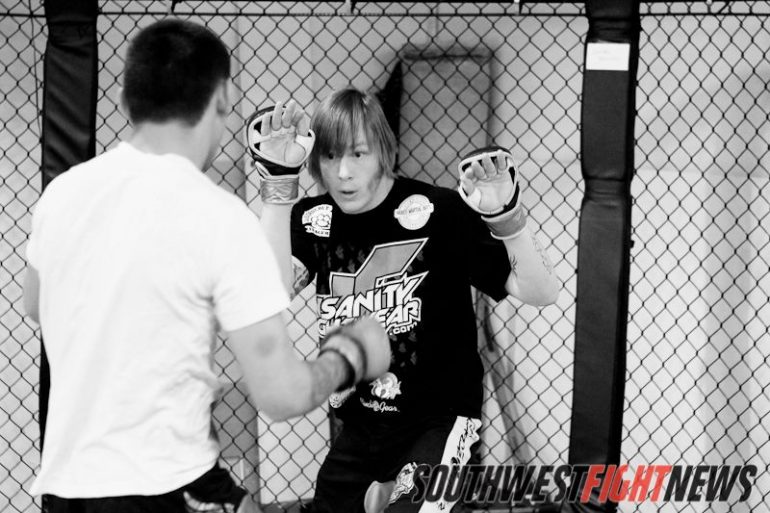 The record of 8-0 sounds typically like a fighter who has had a few really solid years competing in MMA action. Traditionally, a fighter will fight between once to four times a year and that is being generous considering injuries and match making provide obstacles for fighters to stay busy in competition. With the sport booming as loudly as it is, there are more and more fighters competing and looking for fights. To run a record of 8-0 may suggest that a fighter has spent two to three years in action, finding good match-ups and coming out without making a mistake large enough to ruin the perfect record.

8-0 is in fact the record of one single fighter over the course of a 12-month span. It will be very rare to ever see this type of run at this level of competition and that is why Kevin Croom (14-4) is this year’s “Fighter of the Year”.

On January 18th, the Resurrection Fighting Alliance show from Kansas City, Missouri was host to a fight between Kevin Croom and Brian Davidson. Croom held a win over Davidson from three years in the past and heading into the bout, Croom who was then 6-4, was a notable underdog to the rising prospect Davidson, then 10-3. Croom’s meteoric rise in 2013 would begin there after a quick 42-second finish would thrust Croom up the ladder of regional prospects.

During his eight-fight 2013, Croom fought for seven promotions and earned himself quite the statistical intrigue. Croom’s eight opponents were well versed with a combined record of 45-40, Croom earned three technical knockouts to compliment one judge’s decision and four submissions. In those eight fights, Croom has finished every single fight inside the opening round with the exception of the judge’s decision. His resume this year also includes two countries outside of the United States, a win in Mexico and his most recent triumph which was in Russia.

Putting together a memorable 2013 with eight victories in 12-months, Kevin Croom is 2013’s “Fighter of the Year”

Starting the year at 6-4, Croom’s record was anything but indicative of taking his career to the next level. Fast forward 12-months and it is apparent that Croom is very close to taking the step up to possibly the sport’s biggest stage inside the UFC’s Octagon. Whether it will come because of an injury prompting the need for a late replacement or if Croom’s name standouts on the talent list for UFC match-making, it is hard to imagine Croom being too far from one of those scenarios.

A fight fan’s biggest question when realizing the unprecedented run by Croom is to understand what exactly changed in order for Croom to make this schedule of fighting possible. One of Croom’s coaches, Chris Avila has a great idea as to how to answer those questions.

“2013 was a great year for Kevin. His fighting career has taken off. I remember at the beginning of this year we sat and talked about goals and what direction he wanted to go with his career. He was at a cross-roads. He could either look for fights where he would have to wait around and maybe break into the spot he wanted or he could say yes to all of the fights coming his way Kickboxing or MMA.

I have to say that Kevin was willing to roll the dice and scrap tooth and nail to earn an opportunity. He took the hard road. The road less traveled.  He has found a great deal of variety in his training at different gyms, coaches, and people to train with; making each one those gyms home and all of the people that help him on this way, his coaches.

Over the past year I think that Kevin has taught me that his “X-factor” is being open and fluid to change. We all know the Bruce Lee Quote “Be Like water”, I feel like Kevin has learned to be like water. Not worrying so much about what is to come but living in the moment and taking full advantage of the opportunities that are given to him. He makes his way through fight after fight and continues to work hard.

I’m a very proud to know Kevin as both a fighter and friend. He is truly a great person.” – Chris Avila

Croom does spend lots of time with different teams and coaches, amongst those are the Jackson-Winkeljohn gym, Lutrell’s MMA & Fitness, Albuquerque Kickboxing-MMA and Gracie Barra Albuquerque. Working with some many gyms gives Croom the ability to bring tremendous versatility into his MMA game and engulf himself with some of the state’s most knowledgeable coaches for guidance.

One of those coaches, Ray Yee of the Albuquerque Kickboxing-MMA shared his opinion as to what it is that has allowed Croom to be able to do what he has done in 2013.

“Kevin Croom is one of the most talented fighters I’ve had the pleasure to train. He is a work horse and had his sights in focus like a laser scope on a rifle. He is determined, humble and just has fun.

There has only been a few fighters that I have worked with where it’s like a collaboration, instead of all one-sided.  What I mean is, it’s like a conductor with an amazing musician, we each often come up with ideas and then play with it so it flows with his natural body movement and attributes. This is different than just a coach working drills with an athlete.

I think what he’s been able to do in 2013 shows truly how much he wants to make it at the highest level and that he is never afraid of hard work and sacrifices.” – Ray Yee

It isn’t a rarity when a coach speaks volumes of his fighter however, when they offer such intense sentiments it speaks in a much louder volume. Croom deserves the “Fighter of the Year” accolade quite simply because nobody did what he did this calendar year, racking up eight wins in 12-months. He has also done it impressively and he accomplished the feat when his career needed it the most.

We also must talk about the luck that comes with this type of success because even though Croom isn’t lucky in his wins, he has had some favorable luck on his side. Croom has avoided major injury, both in training and within competition and he has found himself fights to keep his schedule this busy. A lot of fighters can vouch that finding fights can be very difficult and Croom has been able to find fights that have allowed him to not only stay busy, but stay successful.

Lutrell’s MMA Head Coach, Chris Luttrell spoke about a little about that fortune Croom captured in 2013.

“Kevin is one tough kid who is doing everything right, he is finishing his opponents without sustaining injuries, he trains every aspect of the game and always has a good game plan going into each fight. Kevin is very intense, can carry an incredible work load and always stays in great shape” – Chris Luttrell

Coach Lutrell hits on another point as well, which is Croom staying in fight shape constantly. His schedule doesn’t allow time to be taken off and the ability to train at such high frequency is remarkable and indicative of his ability going forward to train at the highest levels of MMA.

Croom’s successful 2013 was started way back in January but was capped off just a few weeks ago with a promotional title victory. Croom captured the Alash Pride FC title with his win in Russia and in doing so capped off the “Fighter of the Year” campaign with a title and a glimmer of the potential that could take Croom to the next level in 2014.

2013 Boxing and MMA Highlights and Outtakes