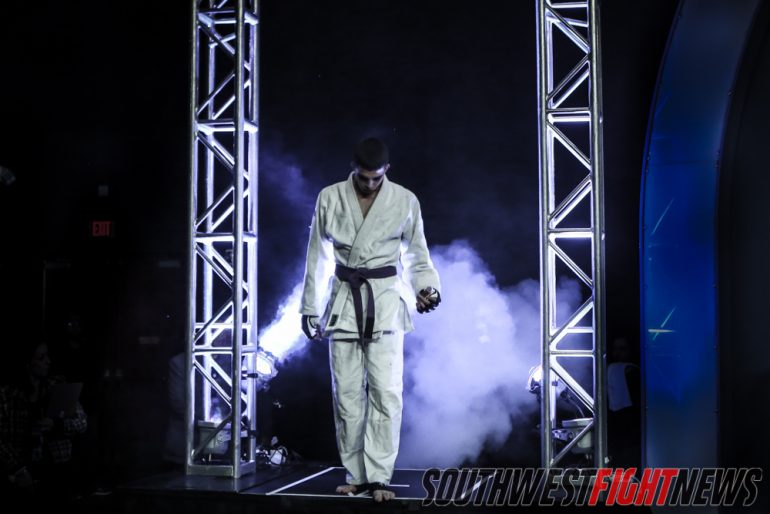 After fighting for the LFA Title in 2018, Rivera will look to shake off an uninspiring 2019 with a win to start 2020. Photo: Will Fox / The Fox Identity

In your first year of embarking on a new career, it is expected to run into some road-blocks and obstacles along the way. It is completely normal to struggle and have some harsh lessons levied onto you during that initial time period. In the world of amateur mixed martial arts, the start of the amateur career is meant to make the mistakes that are much to costly to make as a professional. In 2013, the Southwest has seen an amateur debut and emerge as one of the brightest young talents in the region and become a “must-see” fighter heading into the New Year.

With a perfect record of 4-0 in his first year as an amateur, Santa Fe’s Jerome Rivera is SWFight.com’s “2013 MMA Amateur Fighter of the Year.”

Jerome Rivera of Santa Fe, NM is this year’s 2013 SWFight.com Amateur Fighter of the Year

Phil’s Award Commentary: I watched Jerome train in his first few weeks of walking into his first combat sports gym years ago and from early on it was apparent that he’d be something special. He has always had great work ethic and passion for learning; that isn’t taking into account his natural athleticism and heart which are two things you can’t teach inside the confines of a martial arts gym. I initially thought he was very young to start his amateur career as he was just a fresh 18-year old but he put my doubts to rest by finishing four fights in the first round while competing for three New Mexico promotions. Essentially covering all of his bases, Rivera fought twice for King of the Cage and once for Orthrus Promotions and Fresquez Productions. He headlined an amateur card (King of the Cage) and fought on a Holly Holm headlined fight card (Havoc) and regardless of the pressure of each individual fight, Rivera has shown in his calm demeanor that the challenge of a fight is focused within the cage and not the hype of the match-up.

Rivera has finished three of four fights with a rear-naked choke after first, unleashing well-polished ground and pound that has punished opponents so much that each time he postures up his opponents give up their backs. He has beat guys with experienced records like Joey Trevino from Colorado, newcomers like Bruce Lee Romero from Albuquerque BJJ and Adrian Lopez from El Paso and he capped off the year with an impressive stoppage over undefeated Jackson-Winkeljohn product Ricky Esquibel. It is hard to imagine a better year for an amateur and as a fan, I am excited to see what is to come for Rivera in 2014. Will he turn pro? How about an amateur title?

We awarded Jerome with this accolade not only for his perfect record and successful debut year but also taking into consideration how awesome this kid’s personality is and how down-to-earth Rivera has been during this meteoritic rise in popularity. His humble and quiet demeanor makes Rivera an amazing and coveted talent to have in our state.