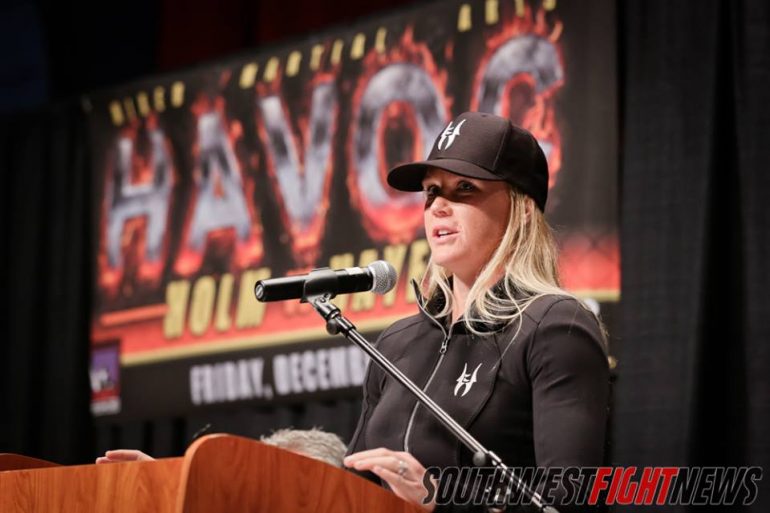 This afternoon, Fresquez Productions hosted their pre-fight press conference inside the Route 66 Casino in Albuquerque, New Mexico. The “Havoc” event is scheduled for Friday night and will feature Holly Holm taking on Angela Hayes in the main event with a ten-bout fight card set to fill up the evening’s festivities. Amongst the notable on the card, top flyweight prospect Nick Urso, Mexican prospect Gabriel “Moggly” Benitez and King of the Cage Champion Cody East.

Several amateur fights will begin the night of action, most notably a match-up between two undefeated talents. The Jackson-Winkeljohn product Ricky Esquibel (3-0) was once the 104.1 The Edge fighting challenge winner and will now take on Santa Fe’s Jerome Rivera (3-0) in a highly anticipated amateur bout.

Ricky Esquibel on the fight: “Someone’s 0 is going to go, so it’s going to be fun.”

Home gym representative Clint Roberts will look to get the edge for the Jackson-Winkeljohn camp in their fun rivalry with El Paso’s Bushido MMA gym when he takes on undefeated professional and amateur fighter Eddie Gamboa.

Clint Roberts on their fight: “Excited to be here, I’m really hungry (Laughs). Had a really good training camp, got to spar with Carlos Condit pretty much every day. I think that prepared me very, very well and I look forward to giving Eddie his first loss.”

The Jackson-Winkeljohn trained Nick Urso is considered by many to be one of New Mexico’s top fighters not-signed by the UFC and with his winning streak getting stronger. Urso is undoubtedly on the right path towards the pinnacle of the sport and he will have a stiff test in Jesus Urbina that he needs to conquer before he gets there.

Nick Urso on his bout: “Always excited to be fighting in Albuquerque, pretty pumped up about it. Got a five fight win streak going on, looking to build on that, go six and get another finish.”

One of the best imports from the Mexican MMA circuit, “Moggly” Benitez didn’t have things go his way in his American debut earlier this year. He will have the opportunity to bounce back but he will not get an easy path back to the winning track as his opponent Rey Trujillo is one of the most seasoned fighters in the regional circuits. Trujillo has been acclimating himself to the area training with Albuquerque’s Lovato Total Fitness and Benitez of course is a product of the Jackson-Winkeljohn gym.

Rey Trujillo on the bout: “I’m gonna go out there and put on a show like a usually do. Been real good out here in New Mexico working with Lovato’s gym. Feels like a home away from home… I’m going to start seeing things in slow-mo and it’s going to be a bad night for my opponents”

“Moggly” Benitez on the fight: (Translated loosely) “I am very excited for the fight, I have the hunger to win. I know he is a very good opponent. We a going to give the best fight that can we can, give our all. This is a fight that can get me noticed.” 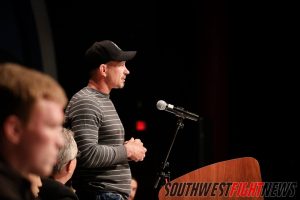 Striking Guru Mike Winkeljohn has several of his fighters competing this Friday night at “Havoc” inside the Route 66 Casino.

Earlier this year, Cody East captured King of the Cage gold when he won a five-round grueling fight against Nick Rossborrough. The win put East on the map and solidified his placement in the ranks of top-New Mexico fighters. He will look to end his “Fighter of the Year” type year against a very tough opponent in Esteves Jones. In the presser, East spoke about the confidence in his striking.

Esteves Jones on the fight: “I’m feeling healthy, feeling ready to fight. I had a great camp so I’m just ready to get down. get back to doing what I love to do.”

Cody East on the bout: “Best condition I’ve ever been in. I’ve been working a lot with (Coach Winkeljohn) Wink cleaning up my striking. I’m going to put on a show for you guys, I know you guys want to see a knockout so that’s what I’m going to give you guys.”

The main event of the evening is a 135-pound clash between elite WMMA prospect Holly Holm, once a decorated World Champion Boxer now converted MMA fighter taking on a seasoned veteran of WMMA in Angela Hayes. Holm’s striking coach Mike WInkeljohn took to the podium to talk about the evening before the ladies closed the press conference with their last words before Friday night’s fight.

“This fight card, gosh, if Holly wasn’t fighting on it… Holly could could pull a card all by herself, everyone wants to be here but take Holly off the card… good value, that’s all I can say.”

Coach Winkeljohn went on to speak on several of his fighters who are competing on the fight card. “Clint is as explosive as anybody, Nick Urso, he’s on his way to the UFC. There all on their way to the UFC. All these guys, on both sides of the table. Everybody is really, really talented. Moggly is one of my favorite guys, came in from Mexico and started beating the crap out of our guys like, “Who is this kid?” That’s how much I like this guy. Cody East, hidden gem here in Albuquerque, a lot of people don’t know a lot about him. King of the Cage World Champion, he’s a “Freight Train”, he hits hard. Holly though, this fight… Holly is on her way to the top. We are trying to brand her, make her better at what she does. But she needs challenges, that’s why we got Angela here to take this fight. She has more experience then Holly. She has a great submission game. I know she has a great guillotine. We have to avoid that that guillotine, defend it well and make her pay for it. Look for some explosive action with Holly doing things she never done in the cage, I want to prove a point that way.”

Angela Hayes was short and sweet in her comments: “It’s going to be a good fight, came here to bang so guys.. be prepared.”

Holly Holm on the fight and event: “This card coming up Friday is a very emotional card for me. I feel very proud to be here. Everyone at this table are people I consider family and I’m just proud to be on this card with them. I hope that I perform, that’s what I want to do, I want to make you guys proud.”

Holm’s promoter Lenny Fresquez had a few interesting quotes talking about Holm’s career and her path going forward. At one point, he stated that they have contacted over 60-fighters to fight Holm and they have all declined. He was speaking about how hard it has been to find opponents for Holm. He also mentioned the possibility of Holm going to the UFC.

Fresquez on the situation between the UFC and Holm: “I’ve been in contact with the UFC, we are kind of a long way apart. We hope to get there someday when they can afford to pay her.” He would go on to say what his main goal for Holm was going forward, “Our target is Ronda Rousey… Hopefully in 2015 that will happen.”

We are eagerly awaiting Friday night’s event, stay tuned to SWFight.com for more event coverage leading up to the fight card which will take place inside the Route 66 Casino.